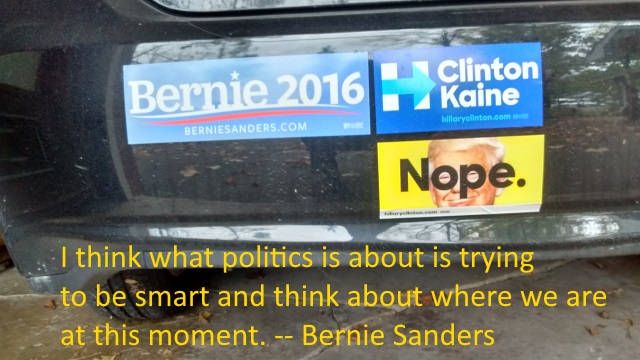 We believe we got at least 80% of what we’ve been fighting for.

In four years we’ve gone from an “all of the above” energy strategy to one that explicitly favors sun and wind over natural gas. The platform promises a Keystone-style test for all federal policy: If it makes global warming worse, it won’t be built. And it calls for an emergency climate summit in the first hundred days of the new administration.

[B]ecause millions of people came out and stood up and fought back … 80 percent, I would say, of the Democratic National Platform is what we believe in. … So, when you ask me, where do we go from here in a sense, it means that we implement this.

Clearly, the best chance for implementing the Democratic platform is to elect Democrats. Sanders’ approach is at once true to his values and practical:

I would hope that all those people who worked with me on this campaign, who supported me, understand that Donald Trump would be a real, real, real disaster for this country. He stands in opposition to everything that we believe in. On the other hand, the day after the election we don’t sit back and say, “Well Clinton is president.” What we do is we mobilize our people to make certain that, hopefully President Clinton, hopefully a Democratic Senate moves forward with an agenda that helps transform this country.

I think what politics is about is trying to be smart and think about where we are at this moment. I want to see Clinton become president and the day after that I, and the progressive members of Congress, and hopefully millions of other people will say, “President-Elect Clinton, here is the Democratic National Platform. It is a progressive document.”

This is not trust. We’re not here to trust. It is the very opposite of what I am saying to say, “Oh, sit back, elect Clinton, and then trust.” No. Mobilize. Educate. Fight. 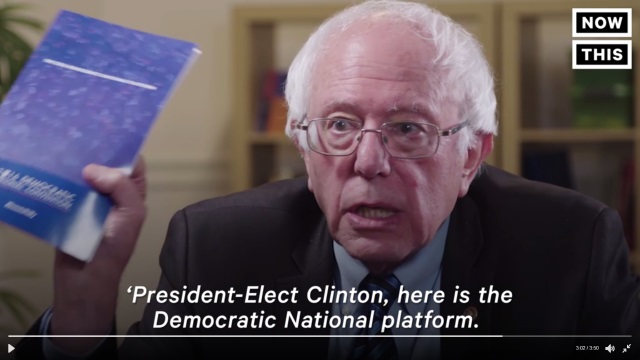 Here are some of the planks in the Democratic Party platform that line up in total, or in large part, with top planks in the Sanders platform.

The Democratic platform, like the Sanders platform, appears to be designed so that all new spending is paid for, and so would not increase the national debt.

“[O]n every important issue … Hillary Clinton’s views are far, far better than Donald Trump’s. And it is absolutely imperative that Donald Trump not become the next president of the United States. That’s true on economic issues, it’s true on healthcare issues — it is especially true on environmental issues and on issues dealing with climate change.” — Bernie Sanders (video: 350.org)

The Vermont senator, who spent his first 19 years in Brooklyn, spoke to a crowd of 28,356 supporters in Prospect Park on Sunday …

We believe we got “Bernie Sanders Won by Waiting to Endorse Hillary Clinton” by Sam Frizell, Time; July 11, 2016

[B]ecause millions of people came out “BernieSanders answers the most important question: Why should his supporters vote for Hillary Clinton?” (video) – Now This; 17 Oct 2016

Sanders plank “Combating Climate Change to Save the Planet” – Bernie 2016

are priced “Building a Clean Energy Economy” – The 2016 Democratic Platform

carbon tax “Combating Climate Change to Save the Planet” – Bernie 2016

Obama’s rejection of the Keystone Pipeline “Obama Will Approve Keystone Only If It ‘Does Not Significantly Exacerbate’ Carbon Pollution” – by Ryan Koronowski, ThinkProgress; Jun 25, 2013

from the current “Raising Workers’ Wages” – The 2016 Democratic Platform

supported net neutrality “Bernie Sanders on Technology”” – On The Issues