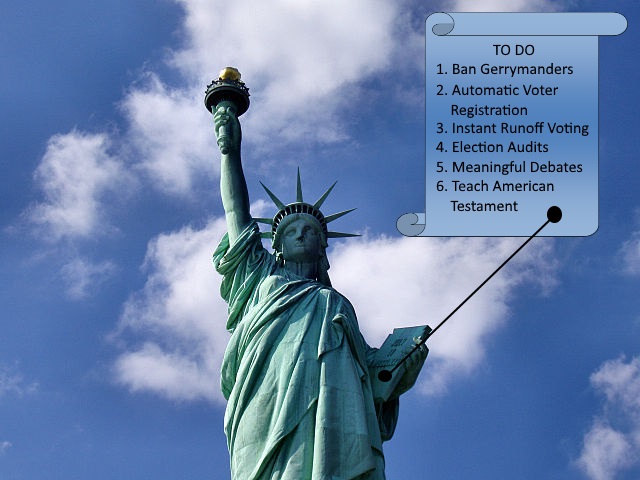 Fair and reliable elections, an informed citizenry, wide participation in governance — these are cornerstones of democracy. But the recent election in the U.S.A. has pointed out serious cracks in those cornerstones. Gerrymandered districts weakened voters of one party, and made races non-competitive. Recently-erected hurdles stopped many from voting. Big media focused on the horse race, and ignored policy issues. Persons trafficked in misleading and fake news on social media. And, in the end, demagogy and crackpottery carried the day. What follows are six simple ideas that can, I think, be easily implemented, and that might well go a long way toward fixing those cracks and strengthening our democracy.

Gerrymanders are the odd-shaped legislative districts that result when a state’s majority party draws the map, aiming to crack minority party voters into many districts where they will be a weak minority, and pack the rest of them into just a few districts. The practice of gerrymandering in the U.S.A. goes back to at least 1812, but the tide may be turning. This year, federal courts have struck down two gerrymandered maps: North Carolina’s for weakening the black voter’s vote, and Wisconsin’s for weakening the Democratic voter’s vote. Both rulings cited violation of the 14th Amendment’s Equal Protection Clause.

Districts represented by members of Congress, or by members of any state legislative body, shall be compact and composed of contiguous territory. The state shall have the burden of justifying any departures from this requirement by reference to neutral criteria such as natural, political, or historic boundaries or demographic changes. The interest in enhancing or preserving the political power of the party in control of the state government is not such a neutral criterion.

But with the court rulings this year, an amendment might not be needed to require all states to draw fair redistricting maps.
Many states have already acted against gerrymanders, some by appointing an independent mapping commission, and others by spelling out mapping criteria.

Over-zealous purging of voter rolls is one trick in the Republicans’ bag for tamping down the Democratic vote. Automatic voter registration negates that trick by keeping rolls up to date and citizens ready to vote throughout their lives. Whenever a citizen interacts with a government agency, such as the Department of Motor Vehicles (DMV), the agency electronically sends voter registration information to the Board of Elections.

In the states, several have enacted automatic voter registration. Oregon passed a strong version, automatically registering all (except those that opted-out) that have a record at the DMV. That has resulted in 250,000 added registrations, of which 43% voted this year.

With instant runoff voting, the voter ranks the candidates as first choice, second choice, third choice, and so on. Then the ballots are counted for the first choices. If no candidate has the majority, another round of counting occurs, where the last place candidate drops out and that candidate’s ballots are counted for the next choice still in the running. Rounds of voting continue in this manner until a candidate has the majority of counted ballots.

Instant runoff voting is used in several U.S. cities, and now in one state. In the recent election, Maine became the first to enact instant runoff voting statewide, passing a ballot measure that brought it to the governor’s race, and to all state and congressional legislative races.

It seems likely that instant runoff voting would have prevented election of Maine’s sitting governor, Paul LePage — a man with teabag views and a loose cannon style. LePage won both election and re-election with apparent help of the spoiler effect, getting less than a majority both times (38% and 48%).

In the name of election integrity, and especially with the rise of computer hacking, a recount of the recent presidential election is now in progress in three states — Wisconsin, Michigan and Pennsylvania. But if we had a national policy of strong election audits designed to catch error and fraud, such a recount would not be needed.

Many states have election audit laws, but few are up to snuff. New Mexico sets the standard, randomly picking a number of precincts for audit to ensure a minimum 90% probability of finding any error or fraud that could change the outcome of a particular race. Statewide, New Mexico uses one type of voting system — paper ballots counted by optical scanners. The audit procedure is to hand count the paper ballots and compare that to the official count from the scanners. The procedure allows for expanding the audit all the way up to a full recount, when significant error is found.

The presidential debates, on the whole, seemed to dwell more on character issues than important policy issues. Among policy issues, we can call global warming the most important, because it threatens civilization, and is today hammering people all around the globe with harsh weather events and conditions. Yet, in the three debates, plus one vice-presidential debate, not one question was asked about that issue. And, in the second debate, after 87 minutes that seemed largely devoted to each candidate (justifiably or not) tearing down the character of the other, the winner was declared to be Ken Bone — a citizen that innocently asked a good question about energy policy.

We can solve this problem by taking the debates out of the hands of the two major parties, and returning control to the League of Women Voters. Then we would most likely have moderators more concerned with informing the electorate than are the current moderators, who are news hosts from the major TV networks, which are more concerned with ratings.

Also, we could open up the debates to a wider range of policy ideas by scrapping the 15% polling requirement, and letting in any candidate that is qualified for the ballot in enough states to win the majority of the electoral vote.

George Washington warned of “internal and external enemies” that would weaken the citizen’s bond with one’s national government. In the 1970’s a new radical conservative movement arose and built a mighty propaganda machine. Since then, it seems that a parade of those internal enemies has been hammering at us — Ronald Reagan, Grover Norquist, Rush Limbaugh, Dick Cheney, Glenn Beck — and many more. With little regard for facts, pushing unfounded conspiracy theory and character assassination, the radical conservatives have sold the people cynicism for their national government. And they have led us to now, when a man who seems the picture of a blithering crackpot waits to take the highest administrative office in the land.

I think by far the most important bill in our whole code is that for the diffusion of knowlege among the people. No other sure foundation can be devised for the preservation of freedom, and happiness.

The most important knowledge for Americans to guard against cynicism for their national government would, I think, be the nation’s creed, which is found in the “American Testament.” The popular American philosopher, Mortimer Adler (1902-2001), championed teaching of the American Testament, which is composed of three documents:

This one simple standard would, I think, give Americans a better feeling of unity, a better understanding of their government, and make them more resistant to political hucksters.

stopped many “The GOP’s Attack on Voting Rights Was the Most Under-Covered Story of 2016” By Ari Berman; The Nation; NOVEMBER 9, 2016

demagogy “Donald Trump wasn’t a textbook demagogue. Until now. – Up to this point, he was more of a garden-variety blowhard.” By Michael Signer; The Washington Post; December 2, 2015

crackpottery “36 Years Down the Republican Rabbit Hole” – The Paragraph; September 25, 2016

tamping down “ACTUALLY RIGGED – North Carolina GOP Brags Racist Voter Suppression Is Working—and They’re Right – Early-voting data confirms that blacks in the swing state aren’t voting as much as in 2012—not for a lack of enthusiasm or effort, but because of rules designed to stop them.” by Jay Michaelson, The Daily Beast; 11.07.16

teabag views “Maine Chaos Is Culmination Of Gov. LePage’s Retaliatory Use Of The Veto” By TIERNEY SNEED; JULY 9, 2015

loose cannon style “LePage considers ‘corrective action’ after Republicans intervene – Party leaders confront the governor over his racial comments and threats, and he plans to talk with family and advisers to decide how to address their concerns.” – BY SCOTT THISTLE, The Portland Press Herald; August 29, 2016

Q: Why isn’t the campaign doing a recount in any other state besides Michigan, Pennsylvania and Wisconsin?

A: Election integrity experts have independently identified Michigan, Pennsylvania and Wisconsin as states where “statistical anomalies” raised concerns. The anomalies are based on the presence of razor-thin margins, hackable and error-prone touch-screen machines, and a discrepancy between exit polls and election results. …

blithering crackpot “When a Crackpot Runs for President” by Nicholas Kristof, The New York Times; SEPT. 15, 2016