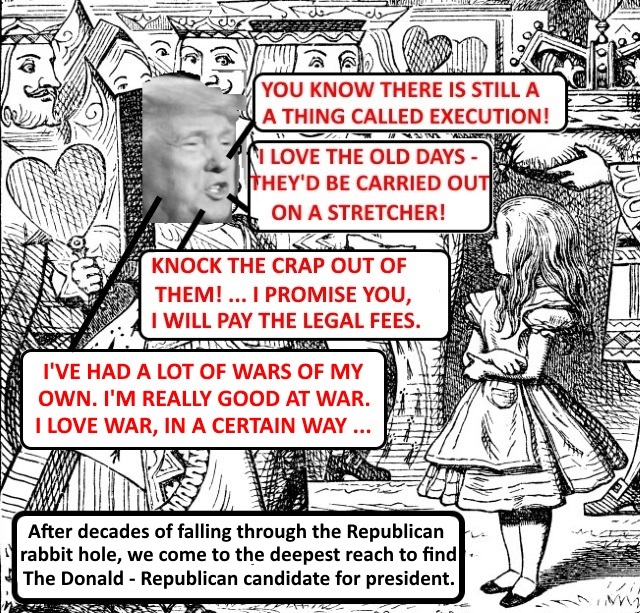 In “Alice’s Adventures in Wonderland,” Lewis Carroll tells the story of Alice, a more-or-less average curious, rational child, who, on a dreamy summer day, chases a waistcoat-wearing white rabbit down a rabbit hole into a bizarre land. In this, and in a later book (“Through the Looking-Glass”), we find many strange characters producing many puzzling and irrational quotes. For instance, we have the giant talking egg, Humpty Dumpty:

When I use a word,’ Humpty Dumpty said in rather a scornful tone, ‘it means just what I choose it to mean—neither more nor less.’

‘The question is,’ said Alice, ‘whether you can make words mean so many different things.’

‘The question is,’ said Humpty Dumpty, ‘which is to be master—that’s all.’

And we have the Queen of Hearts, who is quite quick to propose simple, brutal solutions:

[The King] called the Queen, who was passing at the moment, ‘My dear! I wish you would have this cat removed!’
The Queen had only one way of settling all difficulties, great or small. ‘Off with his head!’ she said, without even looking round.

… and, when the Dormouse spoke out of turn in court:

An observer of American politics since 1980 or so, might well picture oneself as, like Alice, having gone down the rabbit-hole to find many strange Republicans, who, like the characters in Wonderland, issue puzzling and irrational quotes. Over the decades, here are just a few of the characters we have met, as we went down, down, down …

Now, we have come to yet the deepest reach of the rabbit hole, and find The Donald (Donald Trump), a character bizarre as any, and the Republican candidate for president. Like the Queen of Hearts he is quite quick to propose simple, brutal solutions, and blurts out such sayings as these …

Alice eventually woke from her dream world to find herself back in the real world. For us, it will not be so easy. We will have to work to defeat such bizarre characters at the water cooler, in the public forums and at the ballot box. And, under the banner of E Pluribus Unum, we must walk on past the rabbit hole and toward a society enabled to all for the pursuit of happiness.

When I use a word “Through the Looking-Glass” by Lewis Carroll, via Project Gutenberg

called the Queen “ALICE’S ADVENTURES IN WONDERLAND” by Lewis Carroll, via Project Gutenberg

Teflon President “Nothing stuck to ‘Teflon’ president” By Patricia Schroeder; via USA Today; 2004-06-06

made an honorary member “Republicans Get a Pep Talk From Rush Limbaugh” By KATHARINE Q. SEELYE, The New York Times; December 12, 1994

[J]ournalists and others “The Definitive Guide to Every Hillary Clinton Conspiracy Theory (So Far) — From killing cats to faking concussions, all the dastardly deeds attributed to the former secretary of state and first lady.” by TIM MURPHY; Mother Jones; JUN. 9, 2014

We’ve been beat “Limbaugh blamed the left for obesity crisis, lamented that in America, we “[d]idn’t teach them how to … slaughter a cow to get the butter; we gave them the butter” by JULIE MILLICAN; Media Matters; August 29, 2006

anti-government “George Washington Warned of Those Like Reagan, Norquist, Cruz – Enemies to National Government” by Quinn Hungeski, The Paragraph; 2013-10-13

We are trying Ibid.

We also have to work “Cheney’s ‘Dark Side’ Is Showing” By Dan Froomkin, The Washington Post; November 7, 2005

Unknown Known “Rumsfeld’s Knowns and Unknowns: The Intellectual History of a Quip” by DAVID A. GRAHAM, The Atlantic; MAR 27, 2014

Reports that say “The Certainty of Donald Rumsfeld (Part 1)” By ERROL MORRIS; via The New York Times; MARCH 25, 2014

With those attacks “Bush makes historic speech aboard warship” Transcript, via CNN; May 1, 2003

as told by “America’s War for Reality” by Robert Parry, Consortium News; January 15, 2013

Well, they have the education system “The CA cop shooter and Glenn Beck: Here’s what we know” by MATT GERTZ, Media Matters; July 23, 2010

Republican Clown Car “The GOP Clown Car Rolls On – On the campaign trail with the most dishonest, bumbling and underqualified pack of presidential candidates in history” By Matt Taibbi, The Rolling Stone; November 17, 2015

If I’m President “Lindsey Graham: If You Even Think About Joining ISIL, I Will Drone You (AUDIO)” by BRENDAN JAMES, TPM; MAY 18, 2015

This guy is a bad guy “Donald Trump About Edward Snowden: ‘There Is Still A Thing Called Execution’ (VIDEO)” by Rebecca Shapiro, The Huffington Post; 06/24/2013

I love the old days “Protester Would Be ‘Carried out on a Stretcher’ in the Old Days, Trump Reminisces” By CHRIS DEATON, The Weekly Standard; FEB 23, 2016

This is a war against people “Donald Trump’s Pants on Fire claim that US is letting in ‘tens of thousands’ of terrorists now” By Louis Jacobson, Politifact; May 25th, 2016

for the pursuit of happiness “The American Testament” by Quinn Hungeski, The Paragraph; July 3, 2016