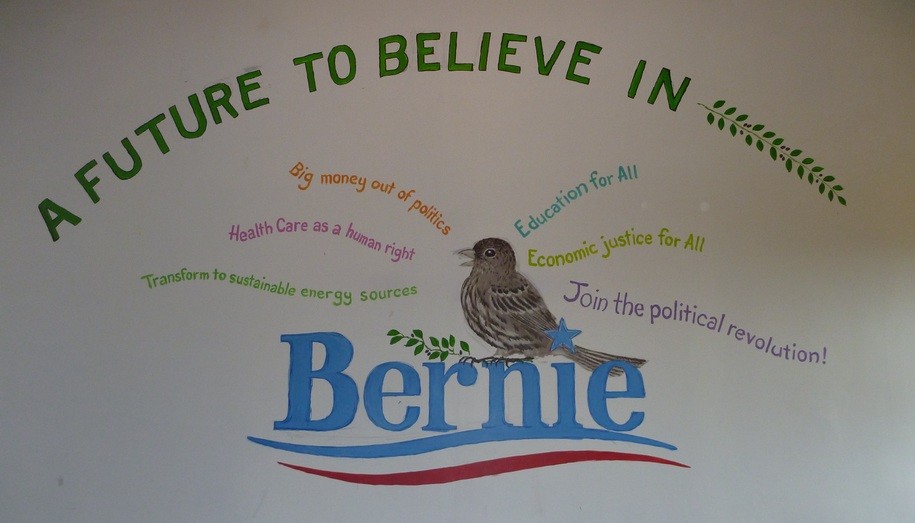 From the time Bernie Sanders threw his hat in the ring, and announced a “political revolution” — a movement to replace the USA’s legalized bribery system with revitalized democracy — various cold water brigades have been trying to douse his campaign. Among them are:

Despite the cold water cast his way, Bernie Sanders has over the past year become well-known and a strong contender. He has won 45% of the primary delegates so far, and finished on top in 19 out of 44 primary votes and caucuses. He has pulled in as much money as Clinton, but unlike his rival, virtually all of it comes from individual donors, with an average donation of about $27. And Sanders has by far drawn the largest crowds to his rollicking rallies.

But, as Sanders keeps saying, “[T]his campaign is not just about electing a president. It is about making a political revolution.” And clearly, what’s best for the political revolution — for democracy, for economic justice, for a livable planet, for peace — is to carry the campaign forward through the remaining primaries, right on through the convention, and into the party platform.

And looking beyond the convention, given the strength and resilience of the Sanders’ campaign so far, the political revolution may well roll on, as a great many that now #FeelTheBern will #KeepOnBerning.

favors a top tax bracket “Bernie Sanders: I’m Not Much Of A Socialist Compared To Eisenhower” – Daniel Marans, The Huffington Post; 11/14/2015

who said “John Kasich Predicts What Will Happen If Bernie Sanders Is The Democratic Nominee” – Amanda Terkel, The Huffington Post; 01/14/2016

he mused “Chuck Todd Says Bernie Knows It’s Over: ‘Did We Just Hear The Bernie Sanders Exit Interview?'” By David, Crooks and Liars; 4/24/16

blog commenters I’ve seen “Why Sanders Must Fight for a Contested Convention (A Response to Rachel Maddow)” By brilyn37, Daily Kos; May 03, 2016

has by far drawn “Bernie Sanders Is Drawing Massive Crowds Around the Country—No Big Deal, Says Washington Post” BY MICHAEL TKACZEVSKI, In These Times; 2015-08-21

into the party platform “﻿ A Contested Convention Is Exactly What the Democratic Party Needs” By John Nichols, The Nation; MAY 3, 2016

may well roll on “Why Bernie Will, Should and Must Stay in the Race” By Jim Hightower; April 27, 2016