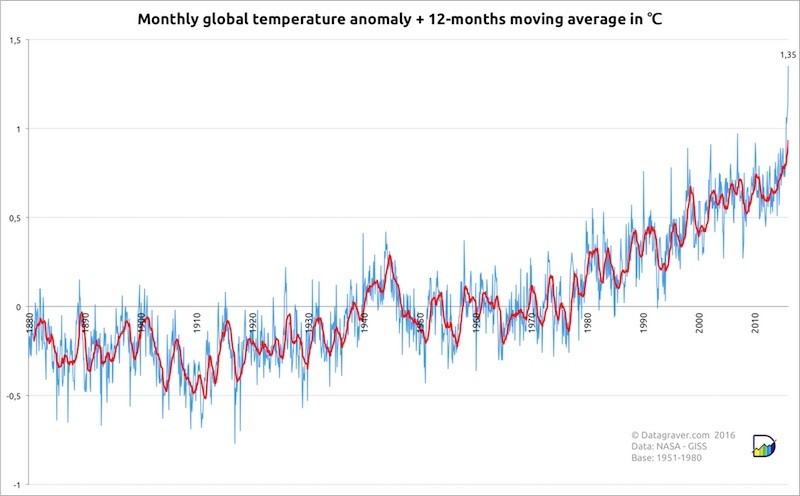 “The departures are what we would consider astronomical. … Everything everywhere is a record this month, except Antarctica. It’s insane.” — Jessica Blunden , NOAA climate scientist

“I feel like I’m looking at something out of a sci-fi movie. … It is a portent of things to come, and it is sobering that such temperature extremes are already on our doorstep.””
— Kim Cobb, Georgia Tech climate scientist

“staggering … The last six months have been … like a punch in the nose. … We are in a new era.” — Deke Arndt, global monitoring chief, NOAA National Centers for Environmental Information, Asheville, North Carolina

“a bombshell of a climate report … a true shocker … we are now hurtling at a frightening pace toward the globally agreed maximum of 2.0°C warming over pre-industrial levels.” — Jeff Masters and Bob Henson, Weather Underground (wunderground.com)

“it is a reminder of how perilously close we are now to permanent dangerous-levels of warmth. It is yet another warning of the urgency of reducing global carbon emissions.” — Michael Mann, director, Penn State Earth System Science Center

The alarm coming from some of the most knowledgeable persons about climate should urge us to pull in the Paris Climate Agreement‘s timetable of zero net carbon emissions by sometime in the latter half of the century, and set our sites on the Climate Mobilization’s timetable of 2025 for the U.S.A. (and 2030 for the world). That means mobilizing the economy to produce clean energy, shutdown fossil fuel extraction operations, and develop CO2 removal machines with the speed and resolve of a nation at war.

What can everyday people do about the climate emergency? We can petition the government to do its job and protect us. And we can vote out those (supposed) public servants blocking action. For the U.S.A., they can be fairly reliably identified by the letter “R” next to their names. That letter stands for the Republican Party (aka, Grand Oil Party), the only major party in the democratic world that believes no national or worldwide climate action is needed.

Image: Monthly global surface temperatures (land and ocean) from NASA for the period 1880 to February 2016, expressed in departures from the 1951-1980 average. The red line shows the 12-month running average. (Stephan Okhuijsen, datagraver.com)

The departures “Beyond record hot, February was ‘astronomical’ and ‘strange'” by Seth Borenstein, Associated Press; March 17, 2016

it is a reminder “It’s Official: February Was The Warmest Month On Record” by Lydia O’Connor, The Huffington Post; 2016-03-17

CO2 removal machines “Climate Change vs. Civilization: We’ve Got Work to Do” The Paragraph; March 3, 2016

the only “Why Are Republicans the Only Climate-Science-Denying Party in the World?” By Jonathan Chait, New York Magazine; 2015-09-27