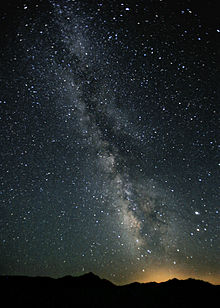 “It Came upon the Midnight Clear” has become my favorite Christmas carol. Though familiar with the song for many years, it was just in the past year or two that I found the lyrics, three verses long, in my mother’s song book. Those three verses tell a nice little story, which I read as follows. In the first verse, the angels come down near earth to give humanity a song of peace and goodwill — a message from “heaven’s all-gracious King.” In the second, more and more angels come, until the song resonates continually around the “weary world,” even over its “Babel sounds.” In the last verse, humanity has finally picked up on the angels’ song, and the foretold golden age of peace sets in.

Thanks to Wikipedia, I have learned that in 1849 Edmund Sears, a pastor of a Unitarian church, wrote the lyrics to “It Came upon the Midnight Clear” in five verses. There are another two verses between the second and the last. The third verse beseeches humanity to silence its noise of war, and hear the “love-song.” The fourth verse beseeches the overworked laborer to take some “glad and golden hours” of rest in the angels’ song. I think these two verses enrich the song, but, to my memory, I have never heard them sung.

Here are the original lyrics for all five verses:

It came upon the midnight clear,

That glorious song of old,

From angels bending near the earth,

To touch their harps of gold:

“Peace on the earth, goodwill to men,

The world in solemn stillness lay,

To hear the angels sing.

Still through the cloven skies they come,

And still their heavenly music floats

O’er all the weary world;

Above its sad and lowly plains,

They bend on hovering wing,

And ever o’er its Babel sounds

Yet with the woes of sin and strife

The world has suffered long;

Beneath the angel-strain have rolled

And man, at war with man, hears not

The love-song which they bring;

And hear the angels sing.

And ye, beneath life’s crushing load,

Whose forms are bending low,

Who toil along the climbing way

With painful steps and slow,

come swiftly on the wing.

O rest beside the weary road,

And hear the angels sing!

For lo!, the days are hastening on,

When with the ever-circling years

Comes round the age of gold

When peace shall over all the earth

And the whole world give back the song

Which now the angels sing.

Of the several versions of the song that I found on YouTube, I most like Ella Fitzgerald’s from 1967. To me, she does the three verses simply and sincerely:

It Came upon the Midnight Clear Wikipedia.org

that was wonderful thank you for sharig

Thank you! I’m singing the first two verses for a Christmas show so I decided to do some research. It’ll be easier to understand now that I know the story behind the lyrics.