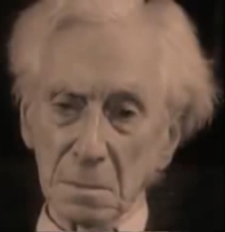 This is my second recent post about Bertrand Russell, the famous philosopher, mathematician, Nobel laureate in literature, and champion of peace. The first post is long — a 21-question pretend interview, where the answers all come from Russell’s book, “Political Ideals,” published in 1917. The present post is short — based on one question and answer taken from an actual interview on the BBC’s “Face to Face” television program in 1959. The interviewer asked Russell what he would like to say to a future generation. Russell’s answer boils down to two watchwords:

Just two, one-syllable watchwords that any of us can keep and carry forward.

The video and transcript of the question and answer follow:

One last question: Suppose, Lord Russell, this film were to be looked at by our descendants like a Dead Sea scroll in a thousand years’ time. What would you think it’s worth telling that generation about the life you’ve lived and the lessons you’ve learned from it?

I should like to say two things, one intellectual and one moral.

The intellectual thing I should want to say to them is this: When you are studying any matter or considering any philosophy, ask yourself only, “What are the facts, and what is the truth that the facts bear out?” Never let yourself be diverted, either by what you wish to believe, or by what you think would have beneficent social effects if it were believed. But look only and solely at what are the facts. That is the intellectual thing that I should wish to say.

The moral thing I should wish to say to them is very simple. I should say, “Love is wise; hatred is foolish.” In this world, which is getting more and more closely interconnected, we have to learn to tolerate each other. We have to learn to put up with the fact that some people say things that we don’t like. We can only live together in that way. And if we are to live together, and not die together, we must learn a kind of charity and a kind of tolerance, which is absolutely vital to the continuation of human life on this planet.

To view the full episode of “Face to Face” with the Bertrand Russell interview, click HERE.

Final question “Bertrand Russell’s Message to the Future” – from the BBC’s “Face to Face” 4 March 1959 (YouTube, uploaded by “B THE CHANGE U WANT 2 C”)