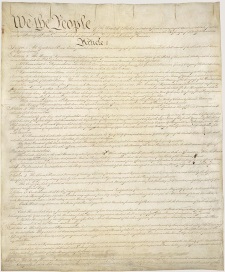 Since William Rehnquist joined the Supreme Court, it has made several rulings that have knocked the U.S. Constitution out of whack. Retired Justice John Paul Stevens, who deliberated on most of those rulings, has written six amendments to fix the damage and tune-up the Constitution. Stevens published his proposed amendments last year in the book “Six Amendments: How and Why We Should Change the Constitution.” The amendments are terse, surgical fixes, which seem to fit the Constitution’s style of saying much with few words. The book gives a good history and description of each problem. Here is a brief rundown with the text of each amendment:

1. The “Anti-Commandeering” Rule: In 1997, by a 5-4 vote, the Supreme Court, created an “anti-commandeering” rule, which bans Congress from ordering state officials to carry out federal duties. The case was brought by two county sheriffs, who did not want to do background checks for firearm sales as ordered by the Brady Act. The new rule led to holes in the database that would allow persons prone to violence, like the killer in the 2007 Virginia Tech mass shooting, to get firearms. Stevens notes that the “anti-commandeering” rule could also cripple other Congressional acts, from routine administration of federal programs to emergency responses to national catastrophes or acts of terror. His fix adds four words (in bold below) to the Constitution’s Supremacy Clause:

2. Political Gerrymandering: Given that he has not heard one word in favor of political gerrymandering from any federal judge, Stevens believes that his amendment addressing it should sail through into law. He points out that, in addition to making legislative districts less representative and less competitive, political gerrymandering tends to give us candidates with more extreme positions. In 1986 the Supreme Court made it practically impossible to challenge gerrymanders by setting a lofty and cloudy standard: “[A] finding of unconstitutionality must [show] continued frustration of the will of a majority of the voters or effective denial to a minority of the voters of a fair chance to influence the political process.” Stevens takes a simpler view: “Just as a controlling political party may not use public funds to pay its campaign expenses, it is also quite wrong to use public power for the sole purpose of enhancing the political strength of the majority party.” He would ban that abuse of power with this new amendment:

Districts represented by members of Congress, or by members of any state legislative body, shall be compact and composed of contiguous territory. The state shall have the burden of justifying any departures from this requirement by reference to neutral criteria such as natural, political, or historic boundaries or demographic changes. The interest in enhancing or preserving the political power of the party in control of the state government is not such a neutral criterion.

3. Campaign Finance: We have gone far down the road to corruption since 1907, when Congress passed a law banning all corporate contributions to political candidates, and many states enacted, outside of narrow lobbying rules, a total ban of corporate activity to influence public policy. In 2010, by a 5-4 vote, the Supreme Court, led by Chief Justice John Roberts, produced the infamous Citizens United ruling giving corporations the unlimited right to finance campaign speech. And last year, by the same 5-4 vote, the Roberts Court struck down any limit on total donations a person could make to candidates, giving rich persons the right to spend millions in a single election. The strongest proposed amendment addressing this problem states that corporations are not persons and money is not speech. Stevens’ amendment states neither, but he believes it would eliminate “the most serious consequences” of Citizens United:

Neither the First Amendment nor any other provision of this Constitution shall be construed to prohibit the Congress or any state from imposing reasonable limits on the amount of money that candidates for public office, or their supporters, may spend in election campaigns.

4. Sovereign Immunity: The Eleventh Amendment, banning a citizen of one state from suing another state in federal court, was prompted by states that wanted to dodge their war debts. Their reasoning leaned on “sovereign immunity,” a principle that holds the “sovereign,” any of the individual states in this case, above the law, shielding it from court action. Stevens says that this doctrine “should never have been adopted in a democracy.” He notes an argument against it from the famous Justice Oliver Wendell Holmes: “It is revolting to have no better reason for a rule of law than that it was so laid down in the time of Henry IV. It is still more revolting if the grounds upon which it was laid down have vanished long since and the rule simply persists from blind imitation of the past.” Since the arrival of Rehnquist, the Supreme Court has made a series of rulings that stretched sovereign immunity and weakened state compliance with national law. For example, in 1974 a Rehnquist opinion let Illinois skate on paying damages for past non-compliance with a federal law for aiding aged, blind and disabled persons. And in 1999 the Rehnquist Court, citing an unwritten state sovereignty rule imagined to be in the “plan of the [Constitutional] Convention,” forbade Congress to authorize suing a state for violations of the Fair Labor Standards Act. To Stevens, striking down the sovereign immunity doctrine is a matter of simple justice. A state-owned hospital, school, or police force should not have a defense to federal claims that a private one does not. To right this wrong Stevens adds an amendment:

5. The Death Penalty: Stevens points out the main arguments for the death penalty: that it keeps the murderer from murdering again; that it deters murder; and that it gives revenge for society’s outrage. But there are good counter-arguments: that a sentence of life without parole also keeps the murderer from murdering again; that it would as well deter murder; and that society has evolved away from vengeance, as shown by its concern that death sentence execution be painless. Another strong argument is that the death penalty is final, yet fallible. Especially with the rise of DNA testing technology, many cases of false convictions have come to light. Under Chief Justice John Roberts, two Supreme Court rulings, including one upholding a judge’s instruction to a jury to choose death when the evidence for and against it is balanced, have made the death penalty a bit more likely. To Stevens, the “final, yet fallible” argument is reason enough to abolish the death penalty, which he would do by adding five words to the Eighth Amendment:

Excessive bail shall not be required, nor excessive fines imposed, nor cruel and unusual punishments such as the death penalty inflicted.

6. Gun Control: For more than two hundred years, federal judges have, according to Stevens, uniformly understood the Second Amendment to be limited in two ways. One, that it applies only for military purposes, and two, that, while it limited the power of the federal government, it did not limit the power of state or local governments to regulate ownership or use of firearms. Thus, in 1939 the Court ruled unanimously that Congress could ban possession of a sawed-off shotgun because that weapon had no reasonable relation to “a well regulated Militia.” But the Roberts Court has twice ruled against governments trying to tamp down gun violence. In 2008, a 5-4 majority, citing the Second Amendment, threw out a Washington, D.C., law and created a new Constitutional right for a civilian in D.C. to keep an enabled handgun at home for self-defense. And in 2010, the same 5-4 Court, citing the Due Process Clause of the Fourteenth Amendment, threw out a Chicago handgun ban, and extended the Court’s newly-created Constitutional right to the states. To restore the Second Amendment to its original meaning, and to return the power of regulating firearms to state and local governments, Stevens adds five words to the Second Amendment:

A well regulated Militia, being necessary to the security of a free State, the right of the people to keep and bear Arms when serving in the Militia, shall not be infringed.

Putting Stevens’ amendments through looks like a long row to hoe. But, as Bertrand Russell once said of his own proposal for political change, “[T]he difficulty … does not diminish the desirability of such a change.” And Stevens is undaunted:

As time passes, I am confident that the soundness of each of my proposals will become more and more evident, and that ultimately each will be adopted. The purpose of this book is to expedite that process and to avoid future crises before they occur.

law banning all corporate contributions “Six Amendments: How and Why We Should Change the Constitution” Page 36

Section 1. [Artificial Entities Such as Corporations Do Not Have Constitutional Rights]

The rights protected by the Constitution of the United States are the rights of natural persons only.

Artificial entities established by the laws of any State, the United States, or any foreign state shall have no rights under this Constitution and are subject to regulation by the People, through Federal, State, or local law.

The privileges of artificial entities shall be determined by the People, through Federal, State, or local law, and shall not be construed to be inherent or inalienable.

Section 2. [Money is Not Free Speech]

Federal, State, and local government shall regulate, limit, or prohibit contributions and expenditures, including a candidate’s own contributions and expenditures, to ensure that all citizens, regardless of their economic status, have access to the political process, and that no person gains, as a result of their money, substantially more access or ability to influence in any way the election of any candidate for public office or any ballot measure.

Federal, State, and local government shall require that any permissible contributions and expenditures be publicly disclosed.

The judiciary shall not construe the spending of money to influence elections to be speech under the First Amendment.

Good article but it should be mentioned that the Bill of Rights already reduced the size of the districts with the ratified Congressional Apportionment amendment. Short once states vote, no one ever looked in Connecticuts voting records but misfiled in 1788 is Connecticuts voting of the Bill of Rights and all 12 amendments were ratified. With that vote, the CAA is ratified and needs to be applied to Congress as soon as possible. While half of you won’t like the amendment, it’s still a ratified amendment and needs to be followed. We are a nation of laws, aren’t we?