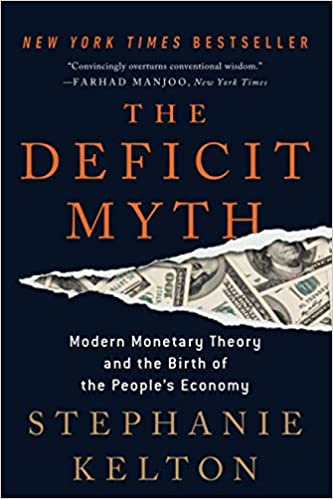 MMT … offers … a realistic description of how a modern fiat currency works, along with some prescriptive ideas about how to transform that understanding into better public policy.

The federal government creates U.S. dollars, and is the only entity that can do so. When the government spends money, it creates the money to spend. It creates coins by minting, reserve notes by printing, or, most often by far, bank reserves by typing on a keyboard. The money then goes into the bank account of the payee. The government doesn’t have to tax or borrow to get money. It just has to spend, and it can never run out.

So, instead of asking, “How will we pay for it?,” we should ask, “How will we resource it?” In other words, how will we find and employ the labor, material, machinery and know-how so that we can use the money created, and so keep inflation under control?

The current way we try to control inflation is via the Fed setting interest rates for lending. The Fed aims for a certain unemployment rate — lowering it by cutting rates and heating the economy; raising it by raising rates and cooling the economy. This method, which sets monetary policy, is indirect and so does not work very well. Also, it is based on pain — keeping a certain number of people unemployed.

Instead of setting fiscal policy after the fact, Congress could look ahead to see what the effects of a spending bill would be. Instead of wasting time on a deficit report, the CBO could produce an inflation report showing how much, if any, of the spending bill would have to be offset by targeted tax increases or spending cuts. If the productive capacity of the economy would be exceeded, then offsets would be needed. Congress could then put them right into the spending bill. In that way, Congress would be working on the important question, “How will we resource it?”

The capitalist economy has been marked throughout history by boom and bust cycles, accompanied by inflation and unemployment. MMT recommends a federal job guarantee to smooth out these cycles. With this program, the federal government would fund jobs at a living wage for every person who wants one. This funding would be open-ended until everyone wanting a job was hired. Local groups and governments would decide what work needs to be done, and create jobs that would be useful to the community.

MMT shows us that we need not sweat budget deficits. What matters are the moral deficits — the shortfall in what people need for the pursuit of happiness. The book points out the deficits in good jobs, individual savings, health care, education, infrastructure, stable climate and democracy. These are not luxuries. With knowledge of how our money works, we can cut the deficits that matter. And we can better keep an economy of full employment and stable prices.

“The Deficit Myth” by Stephanie Kelton

“Productive Capacity” is the only concept I can wrap my head around.

Still trying to understand this paradigm of economics.
So could this principal be implemented by the Chamber of Commerce, say, who knows local businesses and would issue a living wage to locals seeking employment?Businesses would apply to a Federal Guaranteed Jobs data list and receive grants to pay the living wages to meet their productive goals.
This seems like a subtle but profound shift. Potentially increased flexibility and self-worth.

The way I was looking at it, the federal jobs agency would be separate from existing businesses. Businesses could hire away workers in the federal jobs pool by offering more than the set living wage.