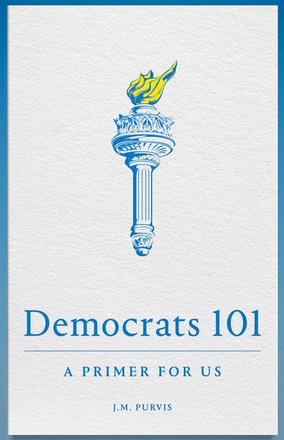 In December, 2021, the Democratic party of a rural northern Ohio county gathered for a holiday party and meeting. During the event, several persons spoke. The last person, the chairwoman announced, would speak about the the book “Democrats 101” by J. M. Purvis. What follows is pretty close to the words the speaker said.

In 1776, American patriots gathered in taverns to hear the reading of “Common Sense” by Thomas Paine. “Common Sense” was, and still is, the most widely circulated publication in American history. It laid down all the fact and reasoning for overthrowing the British monarchy and gaining independence and self rule.

Like the patriots in 1776, we are gathered here tonight at a time of peril. Where their fight was to overthrow monarchy, ours is to save democracy. And the way we do that is by getting more people to identify as Democrats, and more to vote Democratic. And to do that we must state our identity. What is a Democrat? What do we all agree with?

Jim Purvis, the author of “Democrats 101,” brought a group of people from all corners of the Democratic big tent together to answer those questions. They realized that agreement was to be found on values and beliefs, not on policy. The group hammered out the “Democratic Creed,” which forms the core of the book. And I think they did a concise and thorough job of it.

We hold these things to be self-evident:

We further believe that American democracy depends on …

This is what we believe.

The crowd applauded vigorously, and, just as you might have heard in the American taverns in 1776, a shout of “Hear, hear!” rang out.

One man asked, “How can we get people to believe our message over what they hear on Fox News?”

The speaker replied, “By using it everywhere and by repetition.”

There was a box of “Democrats 101” books on a table, and every household went home with one.