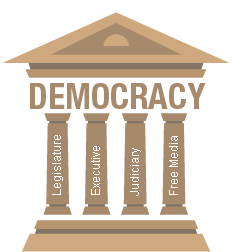 “Everybody knows who Donald Trump is; let’s show him who we are,” said Joe Biden during the presidential campaign. Yes, we do know who Donald Trump is — a destroyer of democracy. And, yes, we did show him who we are — defenders of democracy. During our fight to get from the destroyer’s victory in 2016 to the defenders’ victory in 2020, we drew from the armory of democracy — the free press. From there we armed ourselves with factual information and thoughtful analysis from its hundreds of reliable news publications.

But the destroyer fights with relentless disinformation, big lies and chaos, and tramples the rule of law and democratic norms. That onslaught has spurred some news curators and writers to create new blogs focused on logging the destruction. As the destroyer’s reign slips into history, those focused, news-logging blogs can serve as a gateway to that history. As such, they can serve to further aid the defenders in bringing justice, repair and vigilance. Here is a list of four of those blogs:

“Experts in authoritarianism advise to keep a list of things subtly changing around you, so you’ll remember,” reads the home page of “The Weekly List,” by Amy Suskind. As described on its About page, the blog

tracks specific news stories representing eroding norms under the current regime. Taken together, they reveal a nation pushed towards authoritarianism, the wielding of unchecked governmental authority by one person or group at the expense of the freedom of those who oppose them.

If you had just five minutes a week to absorb the news, you would do well to spend it reading the short summary of each week’s article. But the heart of each article is the 100+ links to reliable news reports. With each link comes a graceful one- or two-sentence description of the news report. In marking the march to authoritarianism, Suskind views The Weekly List as being a “road map back to normalcy.”

“Today’s essential guide to the daily shock and awe in national politics. Read in moderation.” So goes the slogan for WTF Just Happened Today?” by Matt Kiser. This blog began on Inauguration Day 2017. Like “The Weekly List,” “WTF Just Happened Today?” curates the news, but daily (Monday to Friday). Each daily entry lists several top stories of the day, with a solid, short summary for each, and links to several sources that have reported the story.

The Trump false claims database by the Washington Post also began on Inauguration Day 2017. Day-by-day, the Post’s Fact Checker department reviews Trump’s claims and logs the false or misleading ones into this database. In three and two-thirds years, Fact Checker has logged 23,035 entries — a rate of 17 per day, more than one per waking hour. As of today, the database has been updated through Sept. 11 — so it seems the Post has fallen a bit behind with this project.

Letters from an American

“I’m a history professor interested the contrast between image and reality in American politics,” says Heather Cox Richardson. In her blog, “Letters from an American,”she gives a daily essay that sets the day’s political events into historical context. Richardson says, “This is a chronicle of today’s political landscape, but because you can’t get a grip on today’s politics without an outline of America’s Constitution, and laws, and the economy, and social customs, this newsletter explores what it means, and what it has meant, to be an American.”

To further aid defenders of democracy in bringing justice, repair and vigilance, here is a list of blogs focused on logging the destruction wrought by the Trump regime.

Image found at The Rationals.