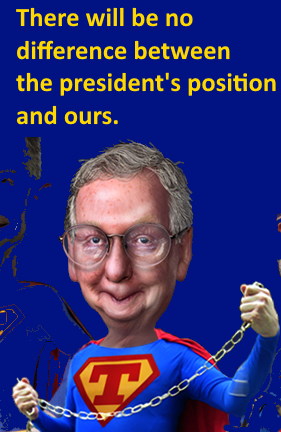 Senator Mitch McConnell, as majority leader, gets a salary of $193,400 from the U.S. taxpayer. But he fails to do his job. Consider the oath of office that McConnell, and every civil servant, takes:

I do solemnly swear (or affirm) that I will support and defend the Constitution of the United States against all enemies, foreign and domestic; that I will bear true faith and allegiance to the same; that I take this obligation freely, without any mental reservation or purpose of evasion; and that I will well and faithfully discharge the duties of the office on which I am about to enter. So help me God.

Well, it seems McConnell fails to “faithfully discharge the duties of the office.” Here are four notable cases.

Before President Barack Obama even took office, then-Senate Minority Leader Mitch McConnell and former House GOP Whip Eric Cantor planned their “no-honeymoon strategy” of total resistance to the president-elect. Former Ohio Senator George Voinovich explained it simply, “If [Obama] was for it, we had to be against it.” But, the plan also had a deeper design, as explained by a Congressional staffer who had left the Republican “cult”:

Should Republicans succeed in obstructing the Senate from doing its job, it would further lower Congress’s generic favorability rating among the American people. By sabotaging the reputation of an institution of government, the party that is programmatically against government would come out the relative winner.

And so it went for Obama’s two terms of office. The first major bill, the Recovery Act, which was an emergency stimulus to climb out of the Great Recession, set the pattern. It passed without a single House Republican vote, and had to be scaled back to get the three Senate Republican votes needed to overcome a filibuster. Also, Senate Republicans filibustered scads of the president’s judicial nominations, which used to be routinely approved. All that played out against a background of baseless GOP and right-wing media character attacks on the president. Thus, McConnell helped lead Republican members of Congress to abandon their normal legislative duties for a cynical power play. And come 2017, they found themselves in control of both houses of Congress and the presidency.

In March of 2016, President Barack Obama nominated Merrick Garland, a highly-qualified and broadly-respected judge, for the Supreme Court. But then-Majority Leader McConnell just brushed off the court vacancy and never even give Garland a hearing. And after ten months, with a new Congress, the nomination expired. Thus, McConnell neglected his duty to do the “Advice and Consent” function, as stated in the Constitution: “[The President] shall nominate, and by and with the Advice and Consent of the Senate, shall appoint … Judges of the supreme Court.”

And how did McConnell feel about his neglect of duty? In August 2016, during the sixth month of blocking Garland, McConnell said, “One of my proudest moments was when I looked Barack Obama in the eye and I said, ‘Mr. President, you will not fill the Supreme Court vacancy.'”

Last April, McConnell announced his plans for any progressive legislation during the next Congress:

If I’m still the majority leader in the Senate think of me as the Grim Reaper. None of that stuff is going to pass.

But, clearly, he has already taken that “Grim Reaper” role in the current Congress. Since Democrats took control of the House of Representatives in January 2019, they have sent some 400 bills to the Senate. Now, the great majority of those bills sit in McConnell’s in-box, as he refuses to bring them up for debate.

Among the blocked bills are HR 1 for clean government, HR 6 to keep protection for Dreamers, HR 8 to close gun background check loopholes, HR 9 for climate crisis action, HR 986 to rescind administration allowance of junk health insurance, HR 1644 to restore net neutrality and internet freedom, and the recently-passed HR 3 to allow Medicare to negotiate drug prices. All of these are popular bills, which deserve movement and debate in the Senate.

Now, an impeachment trial in the U.S. Senate is imminent. Chief Justice John Roberts would preside over the trial, so it seems McConnell would have no power beyond the role of juror, like any other senator. But before the trial, Majority Leader McConnell would take the lead in setting trial rules, which must be voted on by the full Senate. And, here again, McConnell is true to form as a partisan hack. He said:

Everything I do during this [impeachment trial], I’m coordinating with White House Counsel. There will be no difference between the President’s position and our position as to how to handle this. … I’m going to take my cues from the president’s lawyers.

That proclamation conflicts, not only with the Constitution’s oath to faithfully discharge the duties of the office,” but also with the impeachment trial oath to “do impartial justice:”

Do you solemnly swear that in all things appertaining to the trial of the impeachment of Donald J. Trump, President of the United States, now pending, you will do impartial justice according to the Constitution and laws, so help you God?

Mitch McConnell must face Kentucky voters to retain his Senate seat in 2020. So far, one Republican is challenging him in the primary election. And six Democrats are vying in the primary for a chance to challenge McConnell in the November general election. One of the Democrats, Amy McGrath, has raised millions and was virtually tied with McConnell in a July poll. Also, the national Progressive Turnout Project PAC has set its goal in Kentucky to booting McConnell. Said the PAC’s executive director:

If we hope to rebuild our fractured politics and institutions, we need to remove the king of partisan warfare, Mitch McConnell.

Image: Mitch McConnell on Team Trump adapted from ‘Super Trumps of the RNC… even Little Marco joined the team’ by DonkeyHotey on Wikimedia.org; cc-by-sa-2.0 license

planned their “A Walk Down Memory Lane on Republican Obstruction” by Nancy LeTourneau, Washington Monthly; February 1, 2015

left the Republican “cult” “Goodbye to All That: Reflections of a GOP Operative Who Left the Cult” By Mike Lofgren, Truthout; September 3, 2011

set the pattern “The Victory of ‘No’ By MICHAEL GRUNWALD, Politico; December 04, 2016

character attacks “How Years Of The Right-Wing Media’s Obama Hatred Paved The Way For Trump” by Matt Gertz, Media Matters; 01/20/17

control of both “Party divisions of United States Congresses” – Wikipedia

One of my proudest “What Happened With Merrick Garland In 2016 And Why It Matters Now” By Ron Elving at NPR headquarters in Washington, D.C.; June 29, 2018

announced his plans “McConnell pledges to be ‘Grim Reaper’ for progressive policies” By Jordain Carney, The Hill; 04/22/19

sent some 400 bills “House Democrats have passed nearly 400 bills. Trump and Republicans are ignoring them.” By Ella Nilsenella, Vox; Nov 29, 2019

Everything I do “McConnell Says He’ll Take His ‘Cues’ From Trump Lawyers During Impeachment Trial: ‘No Chance’ He’ll Be Removed” By Joe DePaolo, Mediaite; Dec 12th, 2019,