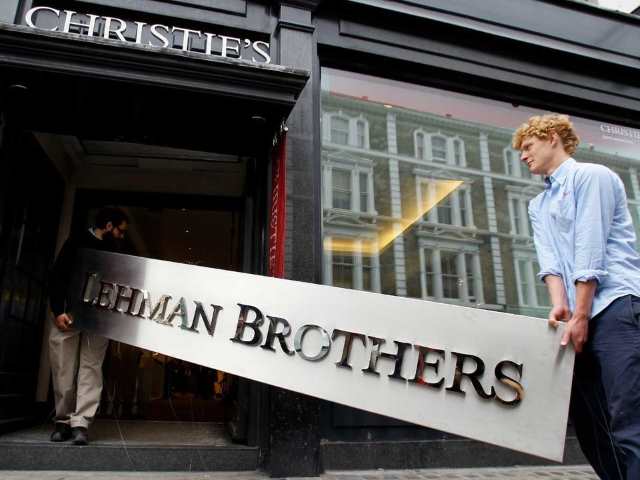 On Tuesday, the U.S. Senate voted to begin floor debate on a bill (S. 2155) that would weaken regulations of banks, large and small, and grease the skids for the next bank crash. After the severe bank crash of 2008, in order to guard against future such crashes, Congress passed the Dodd-Frank law, which enacted the regulations the bill would now weaken. The Congressional Budget Office (CBO) scored the bill for budget costs, and figured $671 million over ten years. But the CBO said its estimate was “subject to considerable uncertainty” due to a “slightly greater” “probability in any year that a systemically important financial institution (SIFI) will fail or that there will be a financial crisis.” However, in 2008, we saw what some of the real cost to the country could be: $821 billion to the federal government, plus $3.4 trillion in real estate wealth and 5.5 million jobs lost.

The banking bill started out with an aim to aid small community banks and credit unions. But soon lobbyists pushed in terms aiding big bank profits. And so the bill became known as the “Bank Lobbyist Act.” A few of the more risky terms would:

There was some agreement that we should help community banks. But it starts with changing the rules for small banks and then you have to do it for the big guys.

But, instead of following Brown, the next day four committee Democrats — Joe Donnelly (IN), Heidi Heitkamp (ND), Jon Tester (MT), and Mark Warner (VA) — resumed negotiations. Within weeks, they reached agreement with Republicans, and sent the Bank Lobbyist Act out of committee, 16-7 (R’s 12-0; D’s 4-7). Democratic staffers believe that Donnelly, Heitkamp, and Tester — being up for re-election in Trump-voting states — think it would help them to say they were “bipartisan” on something. And, we might also imagine that it would help them with their campaign financing. The three senators have received the most money from commercial banks during the 2018 election cycle so far. But Brown, also from a Trump-voting state, does not think that way:

I don’t hear an outcry, whether in Appalachia or downtown Toledo, saying be bipartisan and give lots of stuff to big banks.

16 Democrats joined all Republicans to send the banking bill to the Senate floor, 67-32. So, it would take changing 8 votes to stop the Bank Lobbyist Act by filibuster. But Senate Minority Leader Chuck Schumer, who did a good job of keeping the Democratic caucus together for the Republican tax cut bill, has been on the sidelines for this one.

The Bank Lobbyist Act, as it sits today, is very unlikely to be its final form. Since Tuesday, 146 amendments have been proposed. Also, last summer the House passed a more severe Dodd-Frank roll-back bill. And Republican leaders are aiming to stuff enough of the House bill into the Senate product to get the House to pass it without going to House-Senate conference. Senate debate is set to continue on Monday (March 12).

The following Democratic senators joined Republicans in voting to proceed with the Bank Lobbyist Act:

Petition to Chuck Schumer: “Please speak out loudly and forcefully against the Bank Lobbyist Act, and tell your Democratic colleagues to drop their support of the bill.”

Call and write your senators.

more risky terms “Instead of Taking on Gun Control, Democrats Are Teaming With Republicans for a Stealth Attack on Wall Street Reform” by David Dayen, The Intercept; March 2 2018

without going to House-Senate conference “Senate Claims to Fix Its Wall Street Bill, but a Look at the Text Says It’s Still a Giveaway” by David Dayen, The Intercept; March 8 2018

Call and write your senators U.S. Senate: Senators of the 115th Congress