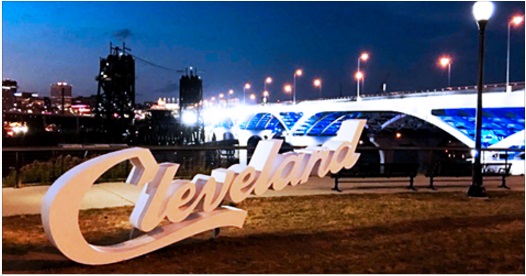 So, you’re a Republican come to Cleveland for your party’s convention — your first visit to my city. I want you to make good use of your time here, and to that end offer these six things for you to do in Cleveland: 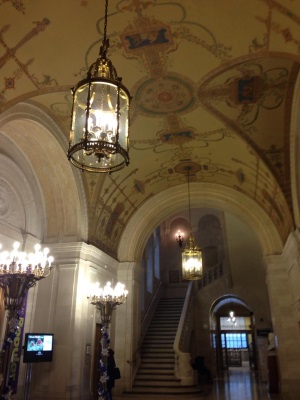 1. With all the downtown bustle, you might like to find a quiet spot to get centered for the week. Walk a few blocks to the main library. Go into the old building, pull down a copy of the Constitution, find a nice chair in a comfortable, sunlit room. Now read some of the words that unite us as Americans: “We the People, … to establish justice, … to promote the general welfare …” Also read, “[The President] shall nominate, and by and with the Advice and Consent of the Senate, shall appoint … Judges of the supreme Court.” But your party’s senators put party over Constitution, and, going on four months now, refuse to give Advice or Consent for President Obama’s Supreme Court nominee, Merrick Garland. Make a note to find one of those cowardly senators, such as Rob Portman of Ohio, and tell him “Do your job or resign!”

2. Are you hungry, and could you do with a brew? Head over the bridge to the Great Lakes Brewing Company. Order fish and chips, and a draft of Edmund Fitzgerald porter. Know that you are partaking of the product of a company that has become successful with its “triple bottom line” philosophy — environmental, social and economic sustainability. Great Lakes Brewing Company sources its food and beer ingredients locally and regionally — including from an in-city farm just a mile or so away. The company does well while doing good, and sets a standard for American business. At the opposite end of that standard are big companies such as ExxonMobil, which hid its own global warming findings to drill ever more oil, dangerously heating the Earth. But the House Science Committee chair, Lamar Smith (R-TX), is running interference for ExxonMobil, harassing scientific groups and attorneys general that are exposing and seeking justice for the company’s fraud. Make a note to tell Mr. Smith, “Put the people before the big corporations, or resign!” 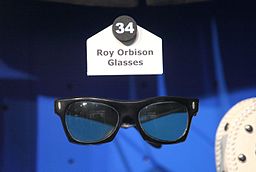 3. Why wait any longer? Stroll on down to the Rock Hall. Take your time … wander the exhibits. Stop at a listening station now and again. Stand before Roy Orbison’s sunglasses. Rock ‘n’ roll was born in America, and shares with America some of its main themes, such as moving forward (like “Get your motor running, head out on the highway.”), and keeping it real (like “Don’t try to lay no boogie-woogie on the king of rock and roll.”). But your party seems to want to move backward to some earlier time — even before the Enlightenment — as it forgoes reality, and latches on to paranoid fantasies. Your party’s presumptive presidential nominee says that Mexicans are coming to engage in crime and rape, so we should build a wall on the border. He also says that certain unnamed scheming persons are hoaxing us on global warming. Make a note to tell your would-be president, “Stop fanning paranoid fantasies — that ain’t rock ‘n’ roll!” 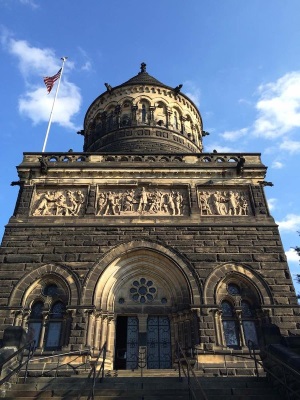 4. Here’s some American history that might interest you. Take the train east and stroll up the hill to Garfield’s Tomb. Look back west and see downtown rise beyond the rolling green sea of treetops of the “Forest City”. President James A. Garfield took office in 1881, and was one of the “Radical Republicans“. Their ideas had become law — banning slavery, mandating equal protection of the laws, and spreading the vote to all (over 21 year-old) adult males regardless of skin color. They put the country on its way to becoming a democracy. So, put a feather in your cap for this legacy of your party. Today’s Republican party is also radical — but in the opposite direction. It strives to favor the rich and big corporations, and to suppress the vote. Make a note to tell your friends in the party, “Remember your democratic legacy.” 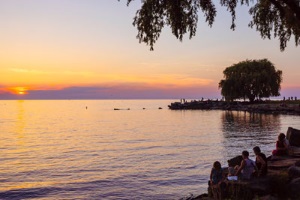 5. Do you want to cool off on this hot day? Take a bus west to Edgewater Park. Walk out on the beach and into the water. As you go, the sounds of the children fade, and the sounds of the waves strengthen. Hear, watch, feel the waves. This is part of the rhythm of Earth — a rhythm that has gone on for ages. But lately the rhythm has been upset by global warming, and we see more fierce downpours, more very hot days, and many other ill effects. But your party — the Republican Party — stands as the only major party in the democratic world that has no policy plank for tamping down global warming. And your would-be president says he will withdraw from the Paris Climate Agreement, which sets a plan for each country on earth to zero-out its greenhouse gas emissions. Make a note to tell your party’s leaders, “Quit embarrassing me, and help our nation do its part to keep a habitable planet.”

6. You’ve crossed the Cuyahoga River a few times, and waded in Lake Erie. Now it’s time to cruise these waters. Stroll back down to the East 9th Street Pier and board the Goodtime III. As you travel the river, you see many bridges, low and high. Look up at the new Innerbelt Bridge, a graceful double span interstate highway bridge — now nearly complete. The bridge was built with significant funding from the Recovery Act of 2009 (“the stimulus”). Passed with a Democratic majority in both houses of Congress, the Recovery Act helped the nation climb up from the Bush Crash of 2008. And with infrastructure like the Innerbelt Bridge, it will continue to help commerce into the future. But the Recovery Act passed with almost no support from Republicans. So, make a note to yourself, “Give the Democrats some credit.”

It’s been a wonderful week, but now it’s time for you to go. As you wait at the airport, review your notes, and think back on your visit. I hope you find it to have been spiritually enriching. Yes, you missed the convention, but there’s just not time for everything in this life. Take out your phone and bring up the Ohio blog Plunderbund.com to catch up.

Great suggestions! Indeed, the Republicans were a great party before the Southern strategy got them all excited about pandering to America’s worst instincts. The current Republicans are no longer the party of Lincoln nor, as you note, Garfield. But if a few take your suggestions, they will probably have a more enjoyable experience than those who hang around the convention.

I have to admit, though, I am no fan of Merrick Garland. Meh.

Didn’t read this till today but found the suggestions pertinent for any visitors. The Rock and Roll Hall of Fame certainly has something for everyone. Interesting factoid; Elton John is Donald Trump’s favorite artist! Unfortunately, I’m sure time didn’t permit for him to put on headphones and kick back to “Burn Down The Mission,” and “Goodbye Yellow Brick Road.”