Agriculture and civilization arose during the unusually long period of fairly steady climate of the last 12,000 years. Today, after 125 years of fossil fuel use boosting the greenhouse effect, the climate is no longer steady. The warmer and still-warming earth gives us ever-harsher storms, heat waves, drought and floods, melting glaciers, and more acidic and rising seas. Those effects stress civilization with food and water scarcity, loss of human habitat, and depletion of public treasuries.

In 1979, the United Nations saw the early onset of global warming climate change and its ill effects, and held the First World Climate Conference. And in 1992, the world adopted the United Nations Framework Convention on Climate Change (UNFCCC), agreeing to “stabilize greenhouse gas concentrations in the atmosphere at a level that would prevent dangerous anthropogenic interference with the climate system.” Today, the problem is far more clear and pressing, and greenhouse gas concentrations are still rising and far from stabilized. So, in December 2015, practically all nations of the world signed the Paris Climate Agreement, agreeing to zero-out greenhouse gas release by sometime in the second half of the century, and to shoot for capping global warming at 1.5C (2.7F) degrees above the average temperature before the fossil fuel era.

To reach those two goals, we’ve got work to do. We can reach the goal of zeroing-out greenhouse gas release by switching all fossil fuel burning to clean energy. But, with ever more greenhouse gas put into the air in the 23 years since the UNFCCC was adopted, that alone is unlikely to keep the average global temperature rise to 1.5C degrees. We must also remove greenhouse gas from the atmosphere.

Switching to clean energy can be done quickly with known technology. In 2009, Stanford University scientists mapped out a plan to meet 100% of the world’s energy needs — for both electricity and fuel — from clean sources. The plan showed the amount of each type of clean energy source to build out for almost every country on earth, considering the resources and situation of each country. The scientists later broke it down for each state of the United States, and last year updated the whole thing for the 2015 Paris Climate Meeting. At the end of 2014, the world was meeting 3.5% of its 45,230 GW power need for 2050 with clean energy, and the USA was meeting 3.7% of its 4,550 GW power need. Here is the build mix for the USA at 100% clean energy:

While we have made gains in implementing clean energy, the world’s leaders still need to set and start executing a clear action plan to reach 100% clean energy by 2050. In the USA, citizens can help that effort by voting against Republicans, who reject climate action, and for Democrats, who favor climate action. Particularly helpful would be the election of Democratic presidential candidate Bernie Sanders, who has put the Stanford build-out plan into his policy platform, and appears to have a stronger climate action plan than the other Democratic candidate, Hillary Clinton. 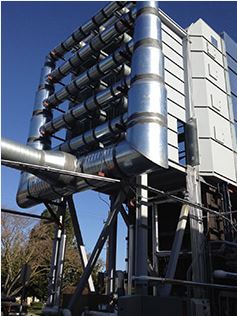 Removing greenhouse gas from the atmosphere can also be done, but how quickly and with what technology is less clear. One promising technology is Direct Air Capture (DAC), which pulls CO2 from the air for commercial use, long-term underground storage, or — best — conversion to a solid form, which would have no chance of leaking back into the air. One company — Global Thermostat — has proven, running prototypes for its device that removes 100,000 tonnes of CO2 per year at an operating cost of $10 per tonne. At that rate, it would cost about $1 trillion to bring CO2 concentration down 50 ppm. That would put us close to the 350 ppm CO2 concentration taken by some experts to be a standard at which climate can be fairly safely stabilized. For comparison, the $1 trillion operating cost would be what the world spends in two years for advertising.

Clearly, accomplishing these tasks and reaching these goals — zeroing-out greenhouse gas release by 2050, and limiting warming to 1.5C — would put us in far, far better shape than continuing on our past course. But it would still leave us with a changed climate with risks of eco-system collapses, such as we are seeing in coral reefs, and of crossing runaway global warming tipping points, such as we may soon see in a massive methane release from Arctic permafrost melt. Also, as we stop burning coal, the most damaging fossil fuel, we will get some unknown amount of further warming, as sulfate particles fall from the atmosphere, no longer reflecting sun rays. Given these risks, we should set stronger goals: to zero-out greenhouse gas release by 2025, and to return global temperatures to that before the fossil fuel era. In other words, we should do these two tasks — switch to clean energy, and deploy atmospheric carbon removal devices — post-haste, with wartime urgency.

During World War II in the United States, the war mobilization called on Rosie the Riveter, who symbolized the can-do factory worker on the home front making the war machines and weapons to support G.I. Joe abroad and beat global fascism. Today, we need Rosie and Joe to build and install wind turbines, solar plants and panels, and DAC devices — and to engineer better versions of them. Against a backdrop of lingering underemployment and low wages, we might well imagine that, once leadership sets the goals and action plan, millions of Rosie’s and Joe’s would sign up for those jobs to beat global warming and save civilization.

zero-out “Why zero is a better climate target than 2 degrees” by David Roberts; Vox; December 21, 2015

switching all “139 Countries Could Get All of their Power from Renewable Sources” By Mark Fischetti, Scientific American; November 19, 2015

is unlikely to keep IPCC, 2013: Summary for Policymakers. In: Climate Change 2013: The Physical Science Basis

A large fraction of anthropogenic climate change resulting from CO2 emissions is irreversible on a multi-century to
millennial time scale, except in the case of a large net removal of CO2 from the atmosphere over a sustained period.
Surface temperatures will remain approximately constant at elevated levels for many centuries after a complete cessation
of net anthropogenic CO2 emissions. Due to the long time scales of heat transfer from the ocean surface to depth, ocean
warming will continue for centuries. Depending on the scenario, about 15 to 40% of emitted CO2 will remain in the
atmosphere longer than 1,000 years.

The best scenario that the IPCC shows here is RCP 2.6, the blue line, which has the lowest and most quickly reducing emissions. This line dips below zero emissions — meaning that more greenhouse gas is being removed from the atmosphere than added — before 2100. But even this scenario leaves us “more unlikely than likely” to stay below 1.5C degrees of warming (see table below). 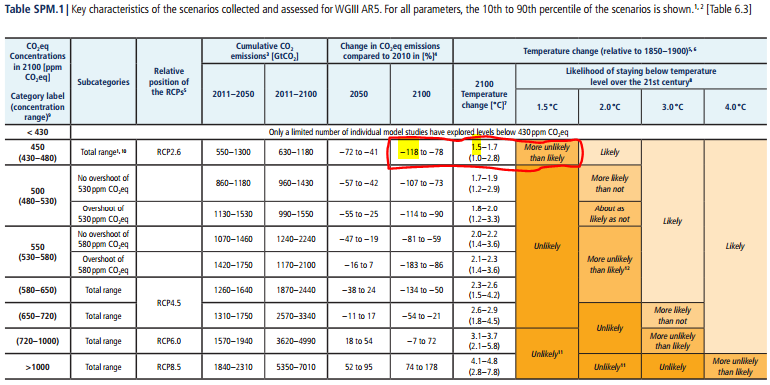 remove greenhouse gas “It’s time to look seriously at sucking CO2 out of the atmosphere” by Brad Plumer, Vox; July 13, 2015

The IPCC has estimated that, to stay below 2°C of warming, we’ll need to zero out our emissions and start removing between 2 and 10 gigatons of CO2 from the atmosphere each year by 2050.

mapped out “How to Power the World without Fossil Fuels” By Mark Fischetti, Scientific American; April 15, 2013

stronger “TWITTER FIGHT! BERNIE AND HILLARY BATTLE IT OUT OVER WHO HAS THE BETTER CLIMATE PLAN” – ecOiko.eu; 23RD JANUARY 2016″

But Clinton has not laid out a comprehensive agenda to cut down on carbon pollution. She hasn’t called for a carbon-pricing system, like Sanders’ carbon tax proposal. It isn’t clear how she would reach her clean energy goals. And she has adamantly refused to join Sanders in calling for a full ban on fossil fuel leasing on federal land. With Obama having just put a moratorium on new coal leasing on public land, that ups the pressure on Clinton to clarify what exactly she would do on fossil fuel leasing. So far, she has only vaguely said she would charge more than the current below-market rates for federal fossil fuel leases.

So the Sanders campaign issued a statement bragging about his climate agenda and calling on Clinton to match it. It ended with a list of top items from Sanders’ agenda that Clinton hasn’t taken a stance on, asking if she will make the same commitments:

With only 12 days to go before the Iowa caucuses, … it remains unclear whether Hillary Clinton will tell voters what she would do to address climate change. …
Does Secretary Clinton oppose the Bakken crude oil pipeline that cuts through Iowa and three other states? What’s her position on the Northeast Direct pipeline in New Hampshire?
Will she support a carbon tax? Will she continue President Obama’s moratorium on all new coal leases on public land? Will she commit to banning fossil fuels extraction on public lands? Does she oppose offshore drilling? Fracking? We just don’t know.
Where is Secretary Clinton’s climate plan?

conversion to a solid form “A Perspective on Air Capture of Carbon Dioxide: Much Easier than Media Reporting Suggests” – Climate Discovery; September 1, 2014

bring CO2 concentration down “Legacy Climate Policy: The Scale of the Current Science and Need for DAC” – Climate Discovery; November 27, 2015

world spends “A Generation of Delay: Climate Policy Is 20 Years Behind” By Bruce Melton, Truthout; 04 December 2015

further warming “A Generation of Delay: Climate Policy Is 20 Years Behind” By Bruce Melton, Truthout; 04 December 2015

In order to meet America’s energy needs, and to help the world meet theirs, we call for a massive scale-up of renewable energy production. As in World War II, we advocate the US government entering into public-private partnerships in which company’s transition costs are covered as they begin producing solar panels and wind turbines.

Government agencies should partner with universities and private companies to continue research into improving renewable energy. Renewable energy technology and hardware should be shared with developing countries who are committed to mobilization.