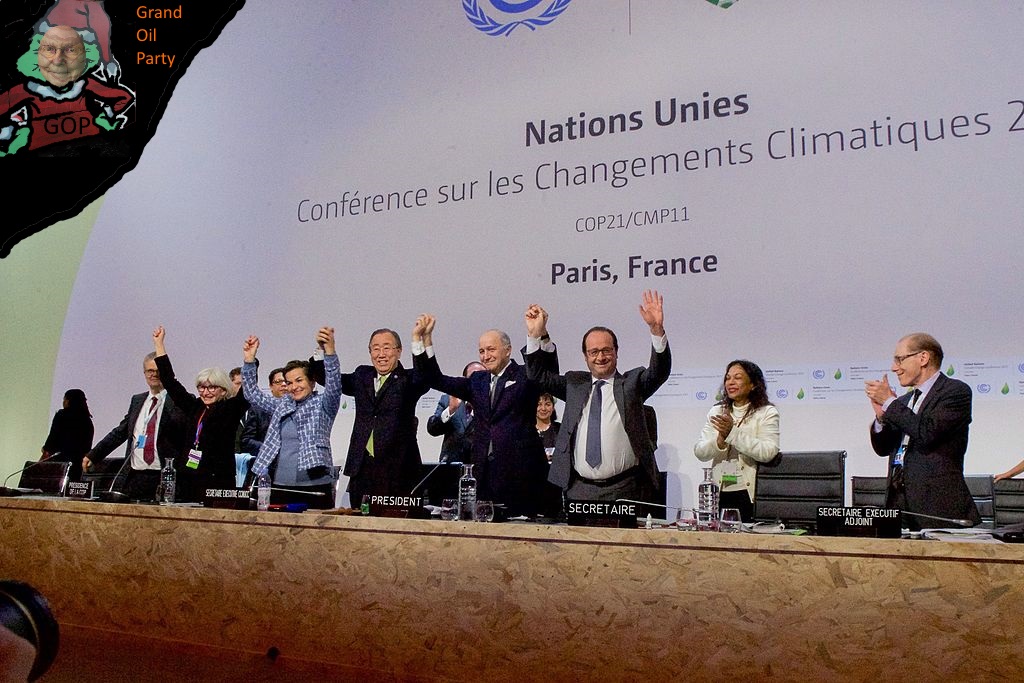 Every nation on earth saw the world getting hot …

But the Grinch, from the Grand Oil Party, did NOT!

He hated the pact made on this Christmas season,

The Grinch forgot all about Hurricane Sandy.

But always remembered his oil and coal candy.

Not forest infernos, nor hard rains in Texas,

But billionaire bucks were the crux of his nexus.

And as ocean waters crept into Miami,

Awash in Koch money, he lounged in his jammies.

But this night his G.O.P nerves were so frighted

At the specter of all the world’s people united.

“They’ll build out clean power!” he snarled with a sneer.

“The end of coal candy is practically here!”

Then he growled with his grinch fingers nervously drumming,

“I MUST find a way, keep clean power from coming!”

Then he got an idea, surely not heaven-sent.

“And the climate agreement that I have so dreaded,

“In just 13 months can be easily shredded!”

But with 13 running the picture was hazy.

They mostly competed to find the most crazy.

But come the next year the grinch plan did bear fruit,

Then young people who loved the earth, loved the nation,

And sought steady climate for civilization,

Asked the contender, “Oh, grinchy one, why

“Do you want greenhouse gas going up to the sky?

“We will keep building wind, solar and water,

“For all of the people, old, young, son and daughter.”

Saw the Oil Party get knocked, rocked and socked!

In favor of one from the Non-Crackpot Party.

And the climate pact made on the Christmas before,

The poor Grinch’s spirit was not very sunny.

He made a bonfire of all his Koch money.

And things looked much brighter for earth, for the nation,