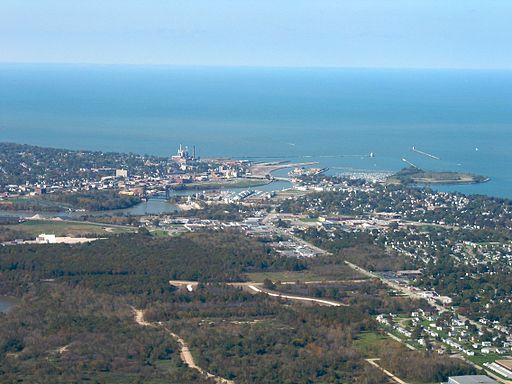 Around 2:00 a.m. Wednesday, Lorain, Ohio, police answered a 911 call from a relative of a suicidal woman with a handgun. Thanks to the police officers’ judgement, bravery, and some luck, the incident ended with a rescue, no shots fired, and no life lost.

The incident ran through three tense phases that could each have taken a fatal turn:

First, when the woman walked towards police holding the gun to her head:

In a dash-camera video, officers can be heard repeatedly telling the woman to “drop the gun.” Police said the woman came toward officers and did not put the gun down, despite repeated orders to.

Next, when she fled in her car at high-speed:

She entered her vehicle in an effort to escape the scene.

“Don’t get in the car,” officers can be heard saying on the dash camera video as the woman begins to drive away, still keeping the gun.

According to police, the woman traveled at a high speed for several minutes before pausing at the intersection of Root Road and East Erie Avenue.

And finally, when she flew her car off a cliff and ended up swimming out into the frigid, dark waters of Lake Erie:

She then accelerated through a residential backyard and drove off a cliff into Lake Erie.

In a media release, Lorain police say the woman fell at least 35 feet in the car and traveled airborne for “a considerable distance.”

Officers could then see the woman swimming out into the lake, rather than trying to get to shore. Three officers went [neck-deep] into the lake to rescue the woman.

Officers pulled the woman from the lake, and she was taken to Mercy Regional Medical Center in Lorain for psychiatric evaluation.

Later that morning, Lorain County’s dive team and the Coast Guard pulled the car from the lake, and investigators found a loaded handgun in the car. 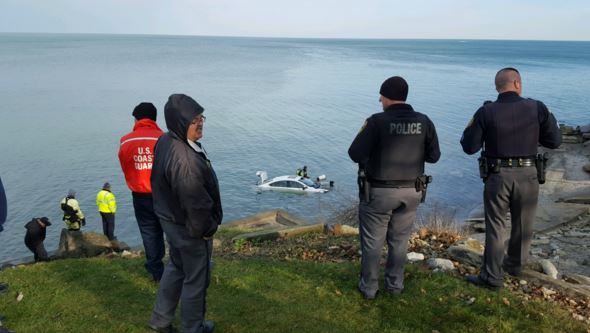 holding the gun to her head “Lorain woman leads police on car chase, drives into Lake Erie” By Kelsey Leyva, The Morning Journal; 12/09/15