On Monday night, a crowd of some 7000 packed into the Cleveland State University arena to see, hear and rally for Bernie Sanders, as he pursues the United States presidency. Sanders spoke for 80 minutes, laying out his platform, one issue after another, and the crowd, which appeared to be made up mostly of young adults, cheered throughout. I am glad to have been among that crowd, to hear Bernie Sanders clearly frame and put forth what I think are some very good policy proposals and ideas, to see so many people cheer those proposals and ideas, and, yes, even to #FeelTheBern. What follows, in the order that they occurred, are the video clips and transcripts of what I judged to be the seven loudest and longest cheers, and the Sanders lines that prompted them.

Yes, we need to create a world-wide coalition that will defeat ISIS, but, no, the United States of America must not be involved in perpetual warfare in the Middle East. 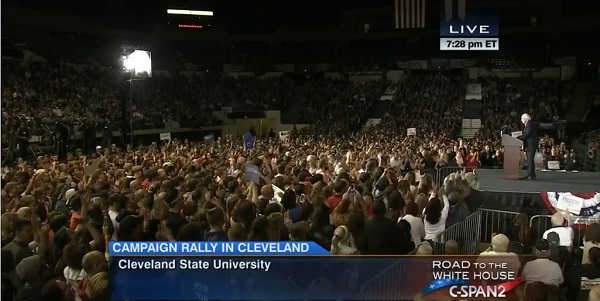 some 7000 “At Rally, Sanders Goes Off Script and Into Foreign Policy” by Emily Schultheis, The National Journal; November 16, 2015