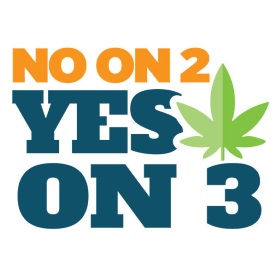 Among the ballot measures for the current election in Ohio is Issue 3, which:

[L]egalize[s] the limited sale and use of marijuana and create[s] 10 facilities with exclusive commercial rights to grow marijuana.

But that plain and accurate summary — from Ballotpedia — is not what Ohio voters will find on the ballot. Instead, Ohio Secretary of State Jon Husted has endorsed this language:

So, instead of leading with what is clearly the main thrust of the issue — to legalize marijuana, Husted has led with a secondary point, and has done so with the negative and inaccurate word — “monopoly.” The ten separate growing companies that Issue 3 licenses would be banned by federal law from collusion, and would likely be in brisk competition among themselves. Clearly, that is not the description of a “monopoly,” where one company controls a market. Also, Husted’s ballot summary would leave you to believe that the “monopoly” was selling to the public. But Issue 3 strictly limits the ten companies to growing and wholesale. There would be some 1100 licensed retail outlets for selling to the public. A third problem with Husted’s ballot text is that it leaves the main effect of the Issue on the broad population to the second sentence (which I have boldfaced) of the fourth bullet point:

In addition to Husted’s tricky ballot language, the Ohio legislature has (with Republicans voting 84-0 for it, and Democrats voting 21-18 against it) placed Issue 2 on the ballot to cancel Issue 3, which was placed on the ballot by initiative petition. Issue 2 would curtail direct democracy by banning “an initiated constitutional amendment that would grant a monopoly, oligopoly, or cartel, specify or determine a tax rate, or confer a commercial interest, right, or license to any person or nonpublic entity.” The issue empowers the ballot board, which is chaired by the secretary of state, to declare an initiative in violation of that ban, and to require voters to pass two questions in order to pass the initiative. The first question would ask the voters to authorize the initiative issue’s “violation … of the Ohio Constitution,” and the second would be the issue itself. In addition, Issue 2 expressly says that any issue involving a “federal Schedule I controlled substance” in this November 3, 2015 election that is in violation of Issue 2’s new rule — in other words, Issue 3 — would not take effect. So the Ohio General Assembly has created a situation where two issues could pass, and only one could take effect in total. Secretary Husted has publicly declared that if both pass, Issue 2, being placed by the legislature, would take effect immediately and cancel Issue 3. But, it seems to me that the vote on Issue 3 should decide Issue 3, and that Issue 2 would, at the least, have to be implemented without its special clause to cancel Issue 3, if not be thrown out entirely. Maybe an impartial judge would also see it that way.

This whole mess created by Husted and the General Assembly is ripe for irony. One irony would see supporters of legal marijuana that are fired up against the supposed “monopoly” vote “No”, and cause marijuana to remain illegal in Ohio for years to come. Another would see, in some future year, a marijuana initiative with a more open market for growing pass, and Ohioans end up with less competition than they would have had with Issue 3. As the capitalistic process of bigger fish swallowing or starving smaller fish went on, Ohioans would be left with a choice between Phillip Morris and R.J. Reynolds — two huge nationwide companies instead of ten small regional ones. A third irony would see Issue 2 pass, and Secretary Husted, through a ballot mess that he had a major hand in creating, bestowed with yet another trick in his bag for thwarting direct democracy and the will of the people.

The Paragraph’s Endorsements for Ohio 2015

one company controls “Does a ballot measure in Ohio create a marijuana monopoly?” – Ballotpedia

chaired by the secretary of state “Ohio Ballot Board” – Ballotpedia