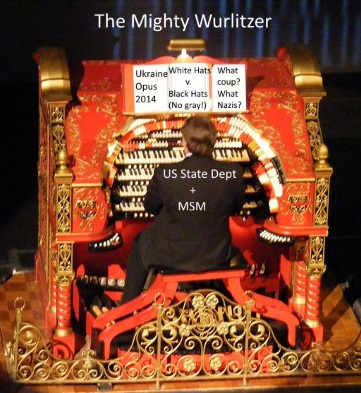 “We can fight against the Europeans, we can fight with rhetoric against them,” said Assistant Secretary of State for European Affairs Victoria Nuland during a meeting of United States officials at a security conference February in Munich, according to the German magazine Bild. The statement shows disdain for the Minsk II agreement — the Ukrainian Donbass war truce and political solution engineered by Germany and France — and favor for a military victory of the current Ukraine government over the break-away Donbass region, which borders and is supported by Russia. Also, the statement shows faith in the U.S. propaganda effort, which employs the Mighty Wurlitzer method of continuously pumping out a one-sided, misleading storyline through many media pipes so that the public comes to believe it. Nuland, a neocon holdover from the Bush II administration who advised Vice President Dick Cheney, gave U.S. politicians at the meeting a tip for minding the p’s and q’s of the propaganda for arming Ukraine. She said, “I’d strongly urge you to use the phrase ‘defensive systems’ that we would deliver to oppose Putin’s ‘offensive systems.’”

On March 23, the House of Representatives officially called on President Barack Obama to send “lethal defensive weapons systems” to Ukraine. Were Obama to heed that call, it could bring a showdown between the U.S. and Russia, two countries that each have thousands of nuclear warheads. So citizens of the U.S. — as well as of the world — would do well to get a fuller and truer story of the Ukraine crisis.

First, let’s look at the “white hats versus black hats” storyline being pumped out by the Mighty Wurlitzer via U.S. officials and the mainstream media. On March 4 and 10, Nuland gave that storyline to Congress in separate testimony to the foreign affairs committees of both houses:

Sixteen months ago, the Kyiv Maidan and towns across Ukraine erupted in peaceful protest by ordinary Ukrainians fed up with a sleazy, corrupt regime bent on cheating the people of their sovereign choice to associate with Europe. … The leader of that rotten regime fled the country, and he was voted out by the parliament … Then, Ukraine began to forge a new nation on its own terms — … undertaking deep and comprehensive economic and political reforms.

[E]ven as Ukraine is building a peaceful, democratic, independent nation across 93% of its territory, Crimea and parts of eastern Ukraine are suffering a reign of terror. …

This manufactured conflict—controlled by the Kremlin; fueled by Russian tanks and heavy weapons … —has cost the lives of more than 6000 Ukrainians …

[W]e salute the efforts of German Chancellor Merkel and French President Hollande in Minsk on February 12th to try again to end the fighting in Ukraine’s East. The Minsk Package of Agreements … offer a real opportunity for peace, disarmament, political normalization and decentralization in eastern Ukraine, and the return of Ukrainian state sovereignty and control of its territory and borders.

Now, let’s look at some facts that can help correct or add some shades of gray to that one-sided story: 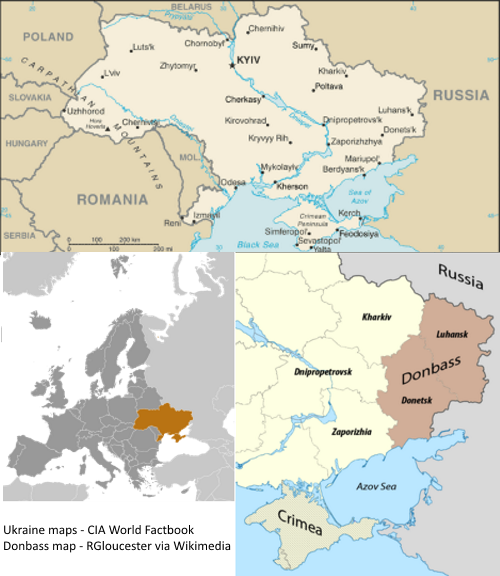 2015-04-05 09:49 EDT: Correction: Crimea is the only mostly ethnic Russian region; other eastern regions are mostly Russian-speaking.

according to “Guiding Obama into Global Make-Believe” by Ray McGovern, Consortiumnews; March 14, 2015

called on “H.Res.162 – Calling on the President to provide Ukraine with military assistance to defend its sovereignty and territorial integrity.” – U.S. Congress

amp up the violence “Ukraine, Through the US Looking Glass” by Robert Parry, Consortiumnews; April 16, 2014

carried out a coup “NYT Still Pretends No Coup in Ukraine” by Robert Parry, Consortiumnews; January 6, 2015

sent the ultra-nationalists “Ukraine, Through the US Looking Glass” ibid.

the deal would cost “The Putin-Did-It Conspiracy Theory” ibid.

to save his life “NYT Still Pretends No Coup in Ukraine” ibid.

brought a band of armed men “Ukraine’s Oligarchs Turn on Each Other” by Robert Parry, Consortiumnews; March 24, 2015

Most of “Crimeans Keep Saying No to Ukraine”; ibid

Nice response in return of this matter with solid arguments and describing everything about that.