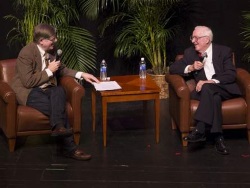 Over his career, Supreme Court justice John Paul Stevens became known for a humble, respectful manner, and for clear, well-founded judicial opinions. We can see those qualities in the infamous Bush v. Gore case, in which the majority stopped Florida’s count of machine-rejected ballots and effectively handed the presidency to George W. Bush. Though the majority’s ruling was blatantly political, Stevens kept to his standard of always taking a fellow judge’s opinion to be honestly held. The famous wrap-up to his dissenting opinion …

Although we may never know with complete certainty the identity of the winner of this year’s Presidential election, the identity of the loser is perfectly clear. It is the Nation’s confidence in the judge as an impartial guardian of the rule of law.

… does not (as I had thought) refer to the majority’s political ruling, but to its cynical lack of confidence in state judges. Reading from the top of that last paragraph:

What must underlie petitioners’ entire federal assault on the Florida election procedures is an unstated lack of confidence in the impartiality and capacity of the state judges who would make the critical decisions if the vote count were to proceed. Otherwise, their position is wholly without merit. The endorsement of that position by the majority of this Court can only lend credence to the most cynical appraisal of the work of judges throughout the land. It is confidence in the men and women who administer the judicial system that is the true backbone of the rule of law.

In 2010, upon the announcement of his retirement from the Court, The New York Times published an article of reminiscences by six of Stevens’s law clerks. We can also see Stevens’s qualities through each of these reminiscences. But my favorite also ends with a quip:

ONE of Justice Stevens’s trademarks is the courteousness with which he treats the lawyers who appear before the Supreme Court. When he wants to elicit information or make a point during oral argument, he typically interrupts the lawyer with the gentle preface, “May I ask you a question?”

During William Rehnquist’s tenure as chief justice, a lawyer was arguing in the court for the first time. When asked a question by Justice Anthony Kennedy, the nervous lawyer started her response with, “Well, Judge — ”

The chief justice leaned forward, his deep voice now at its sternest, to say, “Counsel is admonished that this court is composed of justices, not judges.”

Before the lawyer could say anything, Justice Stevens interjected: “It’s O.K., Counsel. The Constitution makes the same mistake.”

— JEFFREY L. FISHER, associate professor [when this was written] at Stanford Law School, and clerk from 1998 to 1999

Checking the Constitution, we find that Stevens is right — the Supreme Court is to be composed of judges:

[The President] shall nominate, and by and with the Advice and Consent of the Senate, shall appoint … Judges of the supreme Court … [Article II, Section 2]

The Judges, both of the supreme and inferior Courts, shall hold their Offices during good Behaviour … [Article III, Section 1]

Since his retirement, Stevens, now 94, has kept active. He has written two books — “Five Chiefs: A Supreme Court Memoir,” and last year’s “Six Amendments: How and Why We Should Change the Constitution.” And just last month, he appeared on stage for a conversation at the University of Florida.

Rehnquist was always a pompous ass. Read up on the story of how he selected his ornate robe.