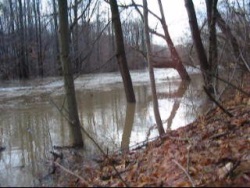 One day past the Winter Solstice, after 34 hours of rain melted last week’s half-foot of snow, the flooding Vermilion River rushes on its winding way to Lake Erie. This seems to be another global warming-type day — heavy rain, instead of snow at solstice time. Now, I understand that you can’t for sure peg any one unusual weather event to global warming. It’s the overall increase in number and severity of such events that you can, with certainty, peg to global warming. 300 years ago, before the Industrial Revolution and the keeping of weather records, who can say a very rainy solstice did not occur? And, by the same token, if the Industrial Revolution had never occurred, or if 20 years ago we had begun to steeply ramp down fossil fuel burning, who can say we would not have a flooding river today? But, leaving aside conjecture, the truth is that every day is a global warming day — because that is the world we live in. And every weather event is a product of our warmer and still-warming planet, as it ruthlessly seeks a new balance.

can’t for sure peg any one unusual weather event “It’s Simple: Global Warming Is Causing the Extreme Weather” by Bill Blakemore, ABC News, 2012-07-15

The few little bubbles before you turned up the heat were like the occasional extreme weather events before the year 1800. That’s when the Industrial Revolution began and then started heating the atmosphere by pouring heat-trapping CO2 into the atmosphere by burning coal and other fossil fuels, and by other industrial-scale activities including clearing of forests, which also release large amounts of CO2.

But it doesn’t make any sense to say any one bubble “was caused by” turning up the gas.

This simple “Parable of the Pot” avoids what is called “the single cause fallacy.”

Of course there have always been extreme heat waves, drought and flood – going back Billions of years, but it’s just that manmade global warming is now shown by virtually all the world’s professional climate scientists to be causing them to be much more frequent, and in some cases (such as intense downpours, intense snowfalls, the extension and height of heat waves) to be more severe more frequently.

According to NCAR senior climatologist Kevin E. Trenberth, “The answer to the oft-asked question of whether an event is caused by climate change is that it is the wrong question. All weather events are affected by climate change because the environment in which they occur is warmer and moister than it used to be.

ruthlessly “9 Reasons Why 2013 Was Not The Best Year In Human History” By Ryan Koronowski and Katie Valentine, ClimateProgress, December 16, 2013