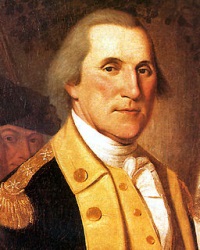 In his farewell address, George Washington gave advice and warnings to help the citizens of the United States keep the Constitution and their liberty. He warned of “overgrown military establishments,” political parties, favoritism for a foreign nation, change to the Constitution based on “mere hypothesis and opinion”, encroachment of one department of government upon another, undermining religion, piling up debt, unwillingness to pay taxes, and permanent alliances with foreign nations. But Washington’s first, and maybe strongest, warning was of “internal and external enemies” that would weaken the citizens’ bond with their national government.

The unity of Government, which constitutes you one people, … is a main pillar in the edifice of your real independence, the support of your tranquillity at home, your peace abroad; of your safety; of your prosperity; of that very Liberty, which you so highly prize. But … it is easy to foresee, that … much pains will be taken, many artifices employed, to weaken in your minds the conviction of this truth; as this is the point in your political fortress against which the batteries of internal and external enemies will be most constantly and actively (though often covertly and insidiously) directed …

We can, I think, find the internal type of such enemies among the leaders of the modern conservative movement, from the “Reagan Revolution” to today’s Teabag Party congressmen. Among those in that movement that have acted to weaken the citizens’ bond with their national government are:

Of fevered factions, such as the teabag Congressmen, that would damage the regular functioning of democratic government, George Washington gave a special warning:

… The very idea of the power and the right of the people to establish Government presupposes the duty of every individual to obey the established Government.

All obstructions to the execution of the Laws, all combinations and associations, under whatever plausible character, with the real design to direct, control, counteract, or awe the regular deliberation and action of the constituted authorities, are destructive of this fundamental principle, and of fatal tendency. They serve to organize faction, to give it an artificial and extraordinary force; to put, in the place of the delegated will of the nation, the will of a party, often a small but artful and enterprising minority of the community; and, according to the alternate triumphs of different parties, to make the public administration the mirror of the ill-concerted and incongruous projects of faction, rather than the organ of consistent and wholesome plans digested by common counsels, and modified by mutual interests.

George Washington did not expect that his advice would be strongly followed, but hoped that it might be helpful to his compatriots from time-to-time.

In offering to you, my countrymen, these counsels of an old and affectionate friend, I dare not hope they will make the strong and lasting impression I could wish; that they will control the usual current of the passions, or prevent our nation from running the course, which has hitherto marked the destiny of nations. But, if I may even flatter myself, that they may be productive of some partial benefit, some occasional good; that they may now and then recur to moderate the fury of party spirit, to warn against the mischiefs of foreign intrigue, to guard against the impostures of pretended patriotism; this hope will be a full recompense for the solicitude for your welfare, by which they have been dictated.

plot “New ‘October Surprise’ Series” – Consortiumnews.com. The latest evidence of a history-changing Republican dirty trick in 1980 and its precursor in 1968.

During the Reagan Administration, the Interior Department leased millions of acres of land, quintupled the amount of previous administrations for oil drilling. It reduced the royalties of coal mining companies on public lands from 8% down to 5%. It sold off oil and shale land for $2.50 per acre. To give an example of what this meant, one parcel of land was sold to a friendly Republican company for $42,000 that was later re-sold only months later for $37,000,000.

Under that compromise, a few segments of the draft chapter were inserted in the final [Iran-Contra] report’s Executive Summary and in another section on White House private fundraising, but the chapter’s conclusions and its detailed account of how the “perception management” operation worked ended up on the editing room floor.

The American people thus were spared the chapter’s troubling finding: that the Reagan administration had built a domestic covert propaganda apparatus managed by a CIA propaganda and disinformation specialist working out of the National Security Council.

“One of the CIA’s most senior covert action operators was sent to the NSC in 1983 by CIA Director [William] Casey where he participated in the creation of an inter-agency public diplomacy mechanism that included the use of seasoned intelligence specialists,” the chapter’s conclusion stated.

“This public/private network set out to accomplish what a covert CIA operation in a foreign country might attempt – to sway the media, the Congress, and American public opinion in the direction of the Reagan administration’s policies.”

many officials convicted Excerpt from “Sleep-Walking Through History: America in the Reagan Years”, by Haynes Johnson, (1991, Doubleday); p. 184

We are trying ibid

but not the polls “Obamacare Polls: Little Support For Defunding But Much Uncertainty, Doubt” by Mark Blumenthal; The Huffington Post; 09/30/2013

The five surveys show that the percentage of Americans who want to defund Obamacare — ranging from 37 to 39 percent — falls well short of a majority, while far more Americans — between 42 and 56 percent — oppose eliminating its funding. And none of these questions raised the possibility of a government shutdown or default on the national debt. When the CNBC/Hart-McInturff survey probed with a follow-up question, a mere 19 percent of adults said they favored eliminating funding for the law “even if this meant shutting down the federal government and having the government default on its debts.”

did not expect “Farewell Address” by George Washington, 1796; paragraph 43

Thank you for your research and your clear-headed delineation of a founding father’s wisdom in the face of the brutal insanity currently being perpetrated on this country.