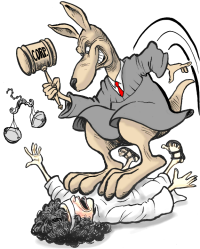 During the "Progressive Era" of the early 20th century, many states passed laws – up to a complete ban with penalties against officers – to keep corporations from meddling in politics. Today, big corporations warp politics in ways that go beyond meddling. One way is corporate spending for elections. Another way is the legal bribery system of lobbying at political fundraisers and the revolving door between government and corporate lobbies or boardrooms. A third way is through the American Legislative Exchange Council (ALEC), where corporate agents hand their ready-to-pass bills to Republican lawmakers. And a fourth way is through the "free trade agreement," which might better be called "fake trade agreement" (FTA), because it is less about trade than about skirting and stomping democratic sovereignty. Since NAFTA, the U.S. has signed on to twelve more FTA’s, and is now driving talks to wrap up two huge new FTA’s, the Trans-Atlantic Free Trade Agreement (TAFTA) and the Trans-Pacific Partnership (TPP).

The way TAFTA and the TPP would skirt democratic sovereignty is by investor-state enforcement. That mechanism lets a foreign corporation skip a member country’s courts and sue at an international tribunal for acts by the country’s legislature or executive that might have hampered the corporation’s planned profits. From such suits under U.S. FTA’s, countries have so far paid corporations $400M, much of it for public health and other public interest policies. For instance, S.D. Myers, Inc., got $5.6M from Canada for its ban on exporting PCB’s, which the company planned to treat in Ohio. The ban was to comply with the world-wide Basel Convention to control and reduce production of hazardous waste. Today, 15 claims for $14B, all leveled against public health and other public interest policies, are pending. For instance, Lone Pine Resources, Inc., wants $241M from Canada, for Quebec’s moratorium on fracking, a gas drilling process that poisons and injects into the ground millions of gallons of water. Lone Pine had permits to frack on 30,000 acres directly beneath the St. Lawrence River. TAFTA and the TPP would offer investor-state enforcement to some 75,000 corporations, and surely bring many more such cases.
The way these two huge FTA’s would stomp democratic sovereignty is by overriding certain current, or banning certain future laws. According to released corporate wish-lists and leaked secret documents, corporate agents seek to stuff these pacts with such goodies as:
While the Obama administration does not support all of the corporate goodies, it does reportedly support and insist on many of them, and is pushing for rapid conclusion to these treaties. Resistance has come from Congress, as 151 Democratic and 23 Republican congressmen have signed letters against re-instating the fast-track rule, which would enable ramming-through these FTA’s without Congressional debate. And steady resistance comes from freedom and public interest organizations such as Public Citizen, the Electronic Frontier Foundation and the Progressive Democrats of America.

many states passed laws “Fixing Corporations: The Legacy of the Founding Parents” by Jane Anne Morris

lobbying at political fundraisers “What Happened When I Gatecrashed Dozens of Capitol Hill Fundraising Parties” by Harry Hanbury, AlterNet

Fundraising parties seem to be proliferating–possibly as an unintended consequence of the otherwise laudable post-Abramoff reforms of 2007, which banned gifts from lobbyists to members of Congress, restricted the use of corporate jets by members, and curbed junkets like Abramoff’s notorious Scottish golfing trip. In his new book, So Damn Much Money , Robert Kaiser quotes the prominent lobbyist Lawrence O’Brien III, who says the latest reforms “have shifted the emphasis over to political fundraising. Now writing checks and raising money is the simplest pathway to completely legal personal face time with members and their senior staff.”

Although the influence powerhouses that line Washington’s K Street are just a few miles from the U.S. Capitol building, the most direct path between the two doesn’t necessarily involve public transportation. Instead, it’s through a door—a revolving door that shuffles former federal employees into jobs as lobbyists, consultants and strategists just as the door pulls former hired guns into government careers.

[9] The Convention also required that appropriate measures be taken within a signatory country to ensure availability of adequate disposal facilities for the environmentally sound management of hazardous waste that were located within its boundaries. It also required that the transboundary movement of hazardous waste be reduced to a minimum, consistent with the environmentally sound and efficient management of such waste and be conducted in a manner that would protect human health and the environment.

An estimated 30% to 70% of the fluid used in fracking will resurface, requiring treatment. Fracking also releases “produced water” from underground that also rises to the surface, and can be anywhere from two to 200 times as much water, depending on the oil/gas/water concentrations in the shale formation.[2]

A 2004 EPA study concluded fracking did not pose a risk to drinking water, helping lead to its exemption from the Safe Drinking Water Act through the Energy Policy Act of 2005. The study was later criticized as limited and compromised by oil/gas industry influence. A 2009 ProPublica investigation found that contamination was far more prevalent than indicated in the report, citing more than 1,000 cases tied to drilling and fracking that had been documented by courts and state and local governments.[3]

TAFTA-2 “TAFTA Could Make You Sick: A Backdoor for Food Contamination” – Public Citizen

TPP-2 “How the TPP Endangers Access to Knowledge, Technology and Information

does not support all “U.S. Wants Financial Services Off Table in EU Trade Talks” By Jamila Trindle And Tom Fairless, The Wall Street Journal, July 15, 2013
NOTE: This article is now behind the pay-wall. It began, “U.S. Treasury Secretary Jacob Lew poured cold water on a push by the European Union’s top financial markets regulator to include negotiations over financial services regulation in EU-U.S. trade talks.” I believe it indicated that the U.S. in TAFTA was trying to protect the Volcker rule of the Dodd-Frank law. However, according to leaked memos (see next note), the Obama administration in the TPP does support some some financial corporate goodies.

does reportedly support and insist on many “Obama Faces Backlash Over New Corporate Powers In Secret Trade Deal” By Zach Carter, The Huffington Post, 12/08/2013

pushing for rapid conclusion “Get Ready for the 2014 Trade Tsunami” by Lori Wallach, Public Citizen

What I think I understand you’re saying is that our laws now allow corporations all over the world to file – and win – lawsuits against us (and other countries) in which they claim our protective laws have prevented them from doing what we forbid and making a profit at it.

That’s about it. These FTA laws are treaties, made by the executive and approved by two thirds of the Senate. We need treaties for things like controlling nuclear weapons, carbon emissions and brutal dictators (by joining the International Criminal Court). But these FTA treaties let corporations sue against higher standards set by democratic legislatures, fueling the race to the bottom. And they would aim to boost corporate profits at the expense of public health and well-being. I think that anyone with an active financial interest in the outcome of these treaties — like corporate agents — should be banned from negotiations.

Do you think that following the protective practice applied in medical research would help? In that situation, any author of an article reporting on or recommending some medicine or treatment approach is required to disclose any connection at all that could be considered to constitute a potential conflict of interest (e.g., a pharmaceutical company paid for the research). Would it help to have authors of treaties disclose their corporate connections?