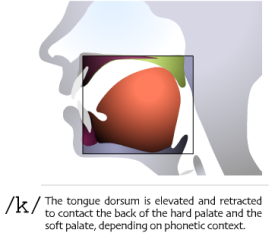 Phonetics is the study of the sounds of human speech, from formation by the speaker to reception by the listener. Some examples of formation are: the “K” sound, which comes from the back of the mouth as the back of the tongue contacts the soft palate; the “P” sound, which comes from the two lips put together; and the “N” sound, which comes when the front and sides of the tongue seal against the alveolar ridge sending the voice to resonate in the nasal cavity. A deafblind person, having no hearing to receive the sound nor sight for lipreading, might use tactile lipreading to receive the sounds being formed. Helen Keller, though adept with a manual alphabet, favored this method, laying fingers on the speaker’s throat, lips and face. By imitating the vibrations and movements she felt, and after much hard practice, she learned to speak with her own voice. She wrote:

… In reading my teacher’s lips I was wholly dependent on my fingers: I had to use the sense of touch in catching the vibrations of the throat, the movements of the mouth and the expression of the face; and often this sense was at fault. In such cases I was forced to repeat the words or sentences, sometimes for hours, until I felt the proper ring in my own voice. My work was practice, practice, practice. Discouragement and weariness cast me down frequently; but the next moment the thought that I should soon be at home and show my loved ones what I had accomplished, spurred me on, and I eagerly looked forward to their pleasure in my achievement.

“My little sister will understand me now,” was a thought stronger than all obstacles. I used to repeat ecstatically, “I am not dumb now.” I could not be despondent while I anticipated the delight of talking to my mother and reading her responses from her lips. It astonished me to find how much easier it is to talk than to spell with the fingers, and I discarded the manual alphabet as a medium of communication on my part; but Miss Sullivan and a few friends still use it in speaking to me, for it is more convenient and more rapid than lip-reading.

However, with her great joy in speaking, later came great disappointment in not being able to do it normally. When lecturing, an interpreter stood beside Keller to repeat her sentences for the audience to understand.

It is not blindness or deafness that brings me my darkest hours. It is the acute disappointment in not being able to speak normally. Longingly I feel how much more good I could have done if I had acquired normal speech. But out of this dark experience I understand more fully all human strivings, thwarted ambitions and the infinite capacity of hope.

Keller was also able, by laying fingers on the face, to enjoy song, as she did with Enrico Caruso. The New York Times reported:

Caruso … sang with power that brought tears to the eyes of other Metropolitan singers who were in the room. And as he sang his voice grew husky with the pathos of the song.

“Though I cannot see your face, I can feel the pathos of your song.” said Miss Keller.

And Caruso said, with his lips against her hands: “In your fingers I can feel your soul. In your blue eyes your soul is shining.”

Miss Keller almost collapsed, so powerfully had the voice of the tenor stirred her.

Keller answered those that wonder how she could enjoy music and natural beauty that most take-in by hearing and sight.

We went to Niagara in March, 1893. It is difficult to describe my emotions when I stood on the point which overhangs the American Falls and felt the air vibrate and the earth tremble.
It seems strange to many people that I should be impressed by the wonders and beauties of Niagara. They are always asking: “What does this beauty or that music mean to you? You cannot see the waves rolling up the beach or hear their roar. What do they mean to you?” In the most evident sense they mean everything. I cannot fathom or define their meaning any more than I can fathom or define love or religion or goodness.

examples of formation “Phonetics: The Sounds of American English” – University of Iowa

When I saw Helen Keller first, she was six years and eight months old. She had been blind and deaf and mute, since her 19th month, as the result of an illness. She had no way of communicating with those around her, except a few imitative signs that she had made for herself: a push meant “go,” a pull meant “come,” and so on. She had observed that we did not use the hands when we were talking to each other. And I let her see by putting her hand on my face, how we talked with our mouths. She felt the vibration of the spoken word. Instantly, she spelled, “I want to talk with my mouth.” That seemed impossible. But after experimenting for a time, we found that placing her hand in this position: The thumb resting on the throat right at the larynx, the first finger on the lips, the second on the nose, we found that she could feel the vibration of spoken words. For instance, the throat she feels the “G”, the hard “G”, “guh”. And on the lips she feels – and the “K” sound, “kuh”, on the lips she feels the “B” and the “tih”. And with the second finger on the nose the nasal sounds, the “nnn”, the “mmm”. The first word she learned to articulate was the little word “it.” With the hand in this position, I made the vowel “ih”. She felt it, “ih.” Then I made the “T”, “tih, tih”. She feels it with the finger on her lips – on my lips.” Then I put the two letters together to form the word, “it.” And the first word was learned. After her seventh lesson, she was able to speak the sentence, word-by-word, “I am not dumb now.”

She wrote “The Story of My Life” by Helen Keller; Chapter 13

later came great disappointment “The Story of My Life” by Helen Keller; Chapter 17 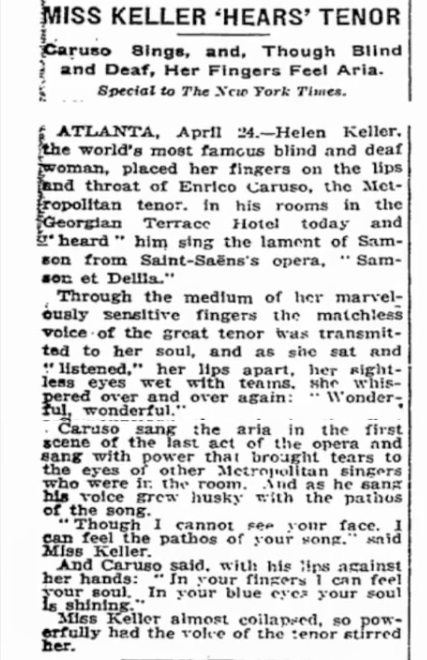 Keller answered those “The Story of My Life” by Helen Keller; Chapter 15