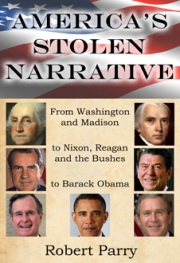 “Nixon Camp Sabotages Viet Peace Talks” — Had the story under that headline been published in real time, Richard Nixon might have lost the 1968 election, and the Vietnam War would likely have ended years earlier. Now, with Robert Parry‘s latest book, “America’s Stolen Narrative,” a full telling of that story has been published, and a sketchy part of America’s history can be filled. The book gives up-to-date, factual, solidly-sourced stories of several important recent (and a few of the earliest) events of American history. And it points out the false narratives, as it sweeps them away. Here are some of the highlights:

The book also tells the stories of:

A nice feature of the book is that many of its notes have web links to original documents and recordings. For example, here is a link that shows the sign-in sheet that helped dismantle Robert Gates’ alibi that he was at a White House meeting with the prime minister of Belize and not at an Iraqgate meeting with an Israeli intelligence agent on April 20, 1989. And here is a link where you can hear the phone call noted above, where Nixon lies to Johnson about sabotaging the Vietnam peace talks.

The book’s author, Robert Parry, wrote some of the earliest stories of Iran-Contra and October Surprise. He has followed up on these and other such stories, digging up and keeping up on new evidence along the way. “America’s Stolen Narrative” is the latest, and, I think, the greatest, result of that work. It is not a long book — 221 pages not counting the index and notes – but it is a meaty book. Virtually every word in it advances the stories told. And they are the classic product of investigative reporting – exposés of dirty, anti-democratic deeds by the highest officers of the republic, a type of story crucial to an informed citizenry in a democracy. These stories show that some conspiracies really are true. But, as the author points out, it is only “careful research and open-minded reporting” that can separate what is real from what is “just a curious anomaly or something hard to explain.” While these stories were largely missed in real time, they are here now, and should rightfully become well-known American history. You the reader can help that come to pass.

I have several copies of Robert Parry’s prior book, “Neck Deep – The Disastrous Presidency of George W. Bush” to give away. E-mail me your (U.S.) mailing address, and I will, while they last, send one to you postpaid. (Note: The free books are now gone.)