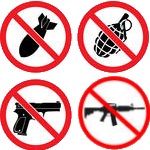 Backed by a national wave of revulsion from the Sandy Hook Elementary School shooting, President Obama asked Congress to ban assault rifles and high-capacity ammunition magazines, such as was used in the massacre. While some have marched in favor of the assault weapons ban, others have marched — toting their guns — against it, viewing the ban as an attack on their Second Amendment right. But that right to keep and bear arms has always had limits. To begin with, the Second Amendment itself limits that right to the purpose of joining a “well regulated Militia.” That limit had been well-settled law until 2008, when the Supreme Court in a 5-4 ruling declared further Constitutional rights, such as self-defense by handgun. But even that new reading upheld limits, such as “prohibiting the carrying of dangerous and unusual weapons.” And even an unstable gun rights zealot that sees himself taking up arms against a tyrannical U.S. government can admit to a Second Amendment limit. We find a case of that in the movie “Bowling for Columbine,” where James Nichols, brother of Terry, the convicted Oklahoma City terror bombing conspirator, showed filmmaker Michael Moore off-camera how crazy he was by putting his under-the-pillow .44 Magnum to his own head.

Moore: Mm, put the hammer back.

Nichols: No one has the right to tell me I can’t have it. That is protected on our constitution.

Moore: Where does it say a handgun is protected?

Nichols: No, gun. We should…

Nichols: Arms. What is “arms”?

Moore: Could be a nuclear weapon.

Nichols: It’s not these – That’s right. It could be a nuclear weapon!

Moore: Do you think you should have the right to have weapons-grade plutonium here in the farm field?

Nichols: We should be able to have anything…

Nichols: I don’t want it.

Moore: But, should you have the right to have it if you did want it?

Nichols: [thinking about it] That should be restricted.

Moore: Ah! Ah, so you do beleive in some restrictions?

Nichols: Well, there’s wackos out there.

Where would you set the limit of what arms you – and your next-door neighbor – could legally keep at home? In the poll below, pick one level of banning. Each ban includes all those prior.

Obama asked “Obama to ‘Put Everything I’ve Got’ Into Gun Control”
By PETER BAKER and MICHAEL D. SHEAR; The New York Times; January 16, 2013

The primary weapon used in the attack was a “Bushmaster AR-15 assault-type weapon,” said Connecticut State Police Lt. Paul Vance. The rifle is a Bushmaster version of a widely made AR-15, the civilian version of the M-16 rifle used by the U.S. military. The original M-16 patent ran out years ago, and now the AR-15 is manufactured by several gunmakers. Unlike the military version, the AR-15 is a semiautomatic, firing one bullet per squeeze of the trigger. But like the M-16, ammunition is loaded through a magazine. In the school shooting, police say Lanza’s rifle used numerous 30-round magazines.

… Matt Brady of Ashton was among those who made the trek. He had an AR-15 military-style assault rifle slung over his shoulder and a Glock pistol strapped to his waist.

“I think our (Second Amendment) rights are being eroded,” Brady said. Still, he wasn’t ready to condemn all of the Obama administration proposals to reduce gun violence. Brady, who said he is a psychologist, supports the president’s call for more money for mental health programs.

“My concern,” he said, “is what the (larger) legislative agenda is going to be. I have a lot of concern about (the federal government) taking away our Second Amendment Rights.”

A well regulated Militia, being necessary to the security of a free State, the right of the people to keep and bear Arms, shall not be infringed.

The first law review article asserting an individual’s right to own firearms for self-defense (or sport) did not even appear until 1960. Eleven articles discussing the Second Amendment were published during this 73-year period. All endorsed the collective right model.

The Second Amendment was adopted to protect the right of the people of each of the several States to maintain a well-regulated militia. It was a response to concerns raised during the ratification of the Constitution that the power of Congress to disarm the state militias and create a national standing army posed an intolerable threat to the sovereignty of the several States. Neither the text of the Amendment nor the arguments advanced by its proponents evidenced the slightest interest in limiting any legislature’s authority to regulate private civilian uses of firearms. Specifically, there is no indication that the Framers of the Amendment intended to enshrine the common-law right of self-defense in the Constitution.

James Nichols: If the people find out how they’ve been ripped off and… and enslaved in this country by the government, by the powers-to-be… they will revolt, with anger, with merciless anger.
There’ll be blood running in the streets. When a government turns tyrannical, it is your duty to overthrow it.