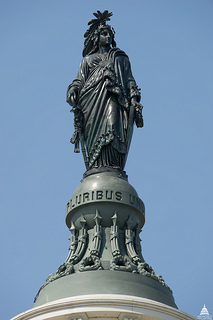 “No minority has a right to block a majority from conducting the legal business of the organization. No majority has a right to prevent a minority from peacefully attempting to become a majority.” Robert M. Pirsig, American philosopher and author of “Zen and the Art of Motorcycle Maintenance,” put that terse summary of Robert’s Rules of Order in his later book, “Lila.” To Pirsig, those two sentences set a framework for a democracy where “Dynamic Quality” can flourish, and society can evolve. But unluckily, in the world’s first modern democracy one party has battered and cracked that framework. In both houses of the U.S. Congress a reckless minority of Republicans routinely blocks a majority from conducting the business of the nation.

In the Senate the Republican minority blocks the nation’s business with the silent filibuster rule. Originally, the filibuster was a seldom-used tactic for a Senator to demonstrate one’s displeasure with an issue by holding the floor for as long as one’s wind held out. But the silent filibuster has practically become a 60% vote requirement. Since 2007, the minority Republicans have filibustered way more than any group before. They have filibustered legislation, such as that to close loopholes to keep the crazy and criminal from buying guns. And they have filibustered confirmations, such as that for director of the Consumer Financial Protection Bureau, trying to block its work, and for judgeships, creating a “judicial emergency” in 33 districts and circuits. 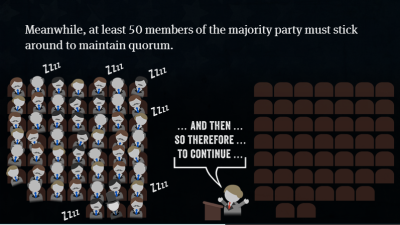 In the House a minority formed of the Republican Teabag Caucus and its followers blocks action on any bill it opposes with the “majority of the majority” rule. Also known as the “Hastert Rule,” after the Republican speaker of the House that made it official party policy, it states that no bill comes to the floor, unless the speaker knows that a majority of Republicans, now a 233-201 majority in the House, favors it. Under the majority of the majority rule, any bill favored by a majority formed of most Democrats and less-than-half of Republicans would not come to the floor. Take for example H.R. 199, which closes a corporate tax loophole on a deduction for executive compensation of more than a half million a year. Such a sensible budget bill just might get 17 Republicans to join 201 Democrats for a majority to pass it. Or take H.R. 163, which protects the Sleeping Bear Dunes area of the Lake Michigan shore as a national wilderness area. That bill is sponsored by twelve Michigan congressmen of both major parties, and would very likely pass before the whole House. But it might be tough to get a majority of House Republicans, who in the last Congress passed a bill that would have gutted the Wilderness Act.

Now, this battered and cracked Congress can be fixed by electing more sane and sensible persons to it. In the Senate, a simple majority can change the rules, and dump the silent filibuster. Voters could enable that in the primary election by ousting any senator that won’t support majority rule. And in the House, the majority party leaders could simply reject the majority of the majority rule. Voters could enable that in the general election by voting in the Democrats, who have never adopted such a rule. To help voters, a candidate in favor of fixing Congress would do well to sign a pledge for democracy and majority rule: 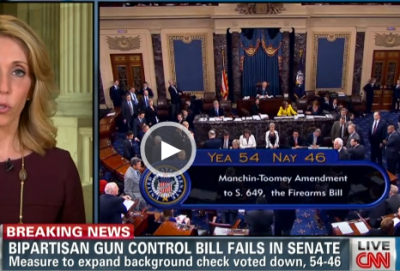 Zen and the Art of Motorcycle Maintenance – WorldCat

Now you might ask: Why don’t the Democrats simply force the Republicans to conduct a talking filibuster?

The reason is this: When 40-plus minority senators are committed to a talking filibuster, the process is much more time-consuming and physically demanding for the majority waiting it out than for the minority doing the actual filibustering.

This is because of something called “quorum.” Under Senate rules, the chamber can’t technically conduct business unless a “quorum” of 51 senators are in the building and ready to take a vote.

… the first thing the minority will do is reduce its presence in the Senate chamber to just one member. This member can keep the filibuster going for a few hours, before being replaced at the podium by another minority member, who takes the next shift. It can go on for days and days without demanding too much of any one minority senator’s time. Meanwhile, at least 50 members of the majority party must stick around to maintain quorum.

crazy and criminal “Background checks on gun sales: How do they work?” By Corinne Jones, CNN; April 10, 2013

The letter was signed by Minority Leader Mitch McConnell (R-Ky.) and 42 of his GOP colleagues — enough to filibuster a vote on Cordray’s nomination.

The senators demanded changes to the bureau’s structure before they would allow a vote on Cordray or any nominee to be its director.

They want the single director position to be replaced by a bipartisan board similar to those that run most other government agencies. The senators also want the bureau’s funding to be part of the congressional appropriations process instead of flowing directly from the Federal Reserve.

And they want to make it easier for other banking regulators to block actions by the consumer bureau.

would have gutted the Wilderness Act “GOP-backed bill is most serious attack on America’s Wilderness Act in history” By Stewart Brandborg; The Christian Science Monitor; November 30, 2012

First, H.R. 4089 elevates hunting, fishing, shooting, and wildlife management above wilderness protection within designated wilderness areas. Visitors or wildlife managers could drive motor vehicles and build roads, cabins, dams, hunting blinds, aircraft landing strips, and much more in wildernesses if any of these activities could be rationalized as facilitating opportunities for hunting, fishing, shooting, or managing fish and wildlife.

Perhaps even more troubling, H.R. 4089 would waive protections imposed by the Wilderness Act for anything undertaken in the name of wildlife management or for providing recreational opportunities related to wildlife. This would allow endless manipulations of wildlife and habitat.

simple majority “How To End the Filibuster Forever – The Senate can kill the rule any time! And with only 51 votes.” By Akhil Reed Amar and Gary Hart; Slate; Jan. 6, 2011