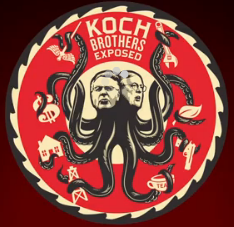 Since the onset of the greed-is-good era, and even more so with the clamor over the “fiscal cliff,” some fat cats have been pushing hard to cut benefits to the old, the disabled and the poor from the big public insurance programs — Social Security, Medicare and Medicaid.

For instance, Peter Peterson ($1.2B net worth), who made his fortune with a boost from the fund manager’s tax break, has so far spent $485M on hyping the national debt problem and pushing propaganda to undermine the public insurance programs — what he has called “the entitlement monster.” He said, “We have to protect the very poor, but it’s a period of shared sacrifice.” But, in the throes of the Great Recession, the non-rich have already sacrificed. And if we would bring back the top bracket ($2.3M in 2011 $’s) 91% income tax rate that was in place from 1941 to 1964, we might help Peterson with his end of the “shared sacrifice.”

Another such fat cat, Lloyd Blankfein ($450M), runs Goldman Sachs, a company that throughout history has inflated Wall Street bubbles, including the housing bubble that popped to bring the bank crashes of 2008 and the Great Recession. Blankfein is a member of the CEO council of the Peterson-funded “Fix the Debt” organization, which was established during the “fiscal cliff” clamor. About the public insurance programs, Blankfein said, “You’re going to have to undoubtedly do something to lower people’s expectations — the entitlements and what people think that they’re going to get, because … they’re not going to get it.” But wouldn’t it be better to instead lower Goldman Sachs’s expectations? If we would bring back the .04% stock transfer tax, which was in place from 1932 to 1966, we might lower them a bit, and might even slow Goldman Sachs’s work on the the next bubble and crash.

Other such fat cats, the brothers Charles and David Koch ($31B each), own and run Koch Industries, which they inherited from their father. The Kochs bankroll so wide an array of political groups — such as the Heritage Foundation, ALEC and the Teabag Party — that it is called the “Kochtopus.” The Kochtopus also pushes propaganda to undermine the public insurance programs, as well as to stifle action on global warming. And the Koch brothers seem to approach their policy drives with the same results-oriented, focused follow-through that has worked in their company business. Charles Koch said, “To bring about social change [requires] a strategy [that is] vertically and horizontally integrated, [spanning] from idea creation to policy development to education to grassroots organizations to lobbying to litigation to political action.” Though it would hardly be enough to corral the Kochtopus, if we would bring back the top bracket ($40M in 2012 $’s) 77% estate tax rate, which was in place from 1941-1976, we might at least, when the Kochs’ children take the reins, slow the flow of its poison.

So, before we cut one dollar going to the old, the disabled and the poor, let’s try bringing back tax rates that worked during the prosperous times before the greed-is-good era, and that would raise many billions for the public till.

The first thing you need to know about Goldman Sachs is that it’s everywhere. The world’s most powerful investment bank is a great vampire squid wrapped around the face of humanity, relentlessly jamming its blood funnel into anything that smells like money. In fact, the history of the recent financial crisis, which doubles as a history of the rapid decline and fall of the suddenly swindled dry American empire, reads like a Who’s Who of Goldman Sachs graduates.

Fix the Debt “The CEO Campaign to ‘Fix’ the Debt: A Trojan Horse for Massive Corporate Tax Breaks” By Sarah Anderson and Scott Klinger; Institute for Policy Studies; 2012-11-13

Charles and David Koch “Inside The Koch Empire: How The Brothers Plan To Reshape America” by Daniel Fisher; Forbes; 2012-12-05

Teabag Party: a more apt name for the fervent anti-tax political movement that calls itself the “Tea Party,” and whose policies abet corporate power. Formed in 2009, the Teabag Party soon held a Tax Day protest, at which a protester threw a box of teabags on the White House lawn. The Teabag Party has virtually no connection to the Boston Tea Party, which was a direct action against a corporate monopoly.

Kochtopus “The Kochtopus” – The Influence of Koch Cash

Charles Koch said “Covert Operations – The billionaire brothers who are waging a war against Obama.” by Jane Mayer; The New Yorker; August 30, 2010

It’s a shock to realize that what you say is true. What a clear eye you cast upon these perilous times. Thanks for helping us see the facts as they really are.

Thanks, Barbara. I’m glad to hear that you got something positive out of this article.