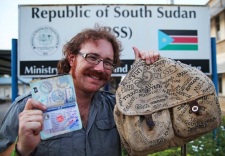 The main feeling today is just one of intense gratitude to every person around the world who helped me get here, by giving me a lift, letting me stay on their couch, or pointing me in the right direction.

Thus spoke Graham Hughes Monday from Juba, South Sudan — the 201st and last country of his surface journey to every country in the world. A hiker and filmmaker from Liverpool, Hughes made the quest alone, on one continuous route, without flying and without driving. Along the way, he shot video, blogged, and hosted the “Graham’s World” show on the National Geographic Adventure Channel. With the publicity, he raised money for a charity that brings sanitation and safe drinking water to the world’s people that lack it.

Hughes began his journey on New Year’s Day, 2009, after reveling in Buenos Aires the prior night. He got up late, rushed to catch the ferry, and crossed the first border of his journey — the River Plate into Uruguay.

They say that every journey begins with a first step. Mine began with a drunken stumble.

Staying on a shoestring budget of, on average, less than $100 a week, Hughes traveled with and stayed with local people, and ate only local food.

I think if I didn’t harbor certain personality traits, I couldn’t actually do this. I’m stubborn and fairly arrogant, but I’m also friendly and jovial with pretty much everyone I meet, which goes a long way.

Though being outgoing and friendly, Hughes did not join every crowd he came upon.

I arrived in Bucharest around lunchtime and headed to the coach station. A political rally was taking place in the park between – I gave it a wide berth. I’ve never been one for mob mentality; I prefer to operate under the radar, subverting people’s opinions by means of stealth, cunning and outright ridicule.

And while skilled at blagging, Hughes could not sway every person he met.

The first time I was thrown in jail was after a boat ride to Cape Verde … I’d arrived on a fishing boat with a bunch of Senegalese fishermen, and naturally the policemen at the port assumed I was a people smuggler. No talking them out of it. I ended up sleeping on the floor of a tiny jail cell with 10 other people for five nights before I was freed without charge.

Hughes knew from the start that he was taking a leap of faith in strangers.

There is no precedent for this. I can’t refer to a single book or call up one person and ask them how to do it – I’m making it up as I go along, dealing with the best information I can lay my heads on and leaving myself completely at the mercy and good will of my fellow human beings from Timbuktu to Kathmandu.

And strangers came through for him. Hughes posted a picture of and a note about many of them — for example: 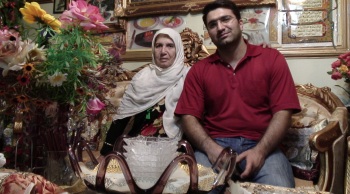 The other reason that Iran is now in my Top Ten countries of the world is this guy here. I was on the overnight coach from Shiraz to Khorramshahr when the dear old lady in front of me who didn’t speak a word of English passed me her mobile phone. The guy on the other end of the line explained that the lady was his grandmother and that she was concerned that the bus got in at 5am and I’d have nobody to meet me. He invited me for breakfast at Granny’s house (how could I refuse?) and sure enough, Hossein picked me up the next morning and we shared the most scrummy breakfast in the world in Granny’s flat. After breakfast he drove me down to the port and made sure I made it safely onto the ferry to Kuwait.

But there were many more helpful strangers than Hughes could list.

The following people are just some of the many ODYSSEY HEROES – believe me, there are many more, but it’s not always possible to snap a pic of border guards who welcome me into their country with a cup of tea, the policeman who slips his mobile phone through the cell bars so I can call for help or the bus driver who drives through the night to get me where I need to be.

As you might imagine, Hughes’ journey brought many highlights.

I … spent seven days in Tibet and warned schoolchildren in Afghanistan about the dangers of men with beards.

I met the Prime Minister of Tuvalu, rode on top of a 18-wheeler through the northern badlands of Kenya, hitched a ride on a cruise ship to The Dominican Republic, joined a Bwiti tribe in Gabon, screamed at the ocean in El Salvador and watched a space shuttle blast off in the USA.

I’ve fed the crocs in Australia, hunted the dragons of Komodo, befriended the orangutans in Borneo, played with the lemurs in Madagascar, washed the elephants in India and eaten live octopus in South Korea.

I … danced with the Highlanders of Papua New Guinea and was rescued from Muslim fundamentalists in The Philippines by a ladyboy called Jenn.

But, for Graham Hughes, one broad highlight stood out.

The main highlight I have to say, … for me, has been the reaffirmation of my faith in humanity and the fact that people I have met on the road have been so friendly and hospitable. 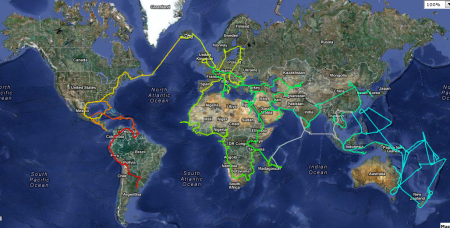 a charity WaterAid – a UK-based registered charity fighting to alleviate the disease, misery and death caused by open sewers, contaminated drinking water and lousy sanitation in developing countries around the world.

They say that every journey ‘Day 1: Hey-Ho LET’S GO!’ by Graham Hughes; The Odyssey Expedition; January 1, 2009

I think if I didn’t harbor certain personality traits ‘Globe-trotting Brit sets a new ‘Guinness’ record for itchy feet’ By GREG CORMACK, Special to The Japan Times; May 16, 2010

I arrived in Bucharest ‘Day 119: Carlos The Jackal’ by Graham Hughes; The Odyssey Expedition; April 30, 2009

The first time I was thrown in jail ‘Globe-trotting Brit sets a new ‘Guinness’ record for itchy feet’ By GREG CORMACK, Special to The Japan Times; May 16, 2010

There is no precedent About The Odyssey Expedition

I … spent seven days in Tibet The Odyssey Expedition