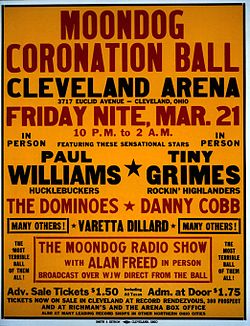 Sixty years ago this week, the world’s first rock ‘n’ roll concert took place in Cleveland, the city that now houses the Rock ‘n’ Roll Hall of Fame.1 The concert was the creation of Cleveland disc jockey Alan Freed, who called his radio show “The Moondog Show,” himself “The King of the Moondoggers,” and the concert “The Moondog Coronation Ball.”2 Freed, who was later among the first inductees into the Rock Hall, and whose ashes lie in its walls, fervently promoted and defended the music, and would soon give it the name that stuck — “Rock ‘n’ Roll”. But the Moondog Coronation Ball was cut short, with the opening act, Paul Williams and the Hucklebuckers, still on stage. Reportedly due to a ticket printing error, some 20,000 ticket holders had shown up at the Cleveland Arena – a venue that usually held no more than 9,950 spectators in the seats and 12 hockey players on the ice. And after the shut-out ticket-holders knocked in the doors, police, and firemen with hoses, shut down the show. Twenty-some years later, Cleveland produced similar rock concerts called “The World Series of Rock”, where a line-up of musicians performed at Cleveland’s Municipal Stadium, packing in as many as 88,000 rock fans.3 And for the past eight years, the big oldies station in town has been putting on, as a tribute to the original, a Moondog Coronation Ball, featuring oldies artists again playing their good old songs.4 But what of those original rock fans on March 21st, 1952? What music might they have heard had the show gone on? DJ Guy Z gave us an answer this week during his radio show on “The Sunday Oldies Jukebox,” WSTB in Akron. Guy Z played a likely song for the date of the concert by each announced musical artist.5 While we have no recording of Sunday’s radio show, we do have the play list and online audio. Click on the songs below to hear the music of The Moondog Coronation Ball.

Notes on the selections by Guy Z:

Songs are all just educated guesses, but possible in terms of recording date. Some are a “good bet,” though, as Williams would almost certainly have played the Hucklebuck at some point. 60 Minute Man was a #1 hit for The Dominoes in 51. The day after the Moondog, Freed played Rocking the Blues as the 2nd song of his broadcast. 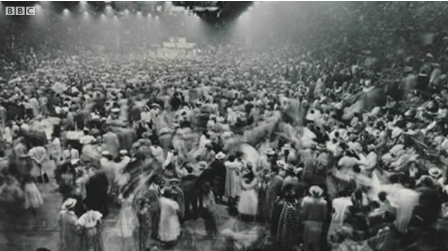 Less well known is the reason why the Moondog Coronation Ball ended in disaster: a minor printing error.

The mistake was caused by someone forgetting to add the date to tickets issued for a follow-up ball, which Mintz had set about organising immediately after the initial one sold out.

As a result, an estimated 20,000 people showed up on the same night for the first concert – at a venue which could hold half that number.

Freed was inducted into the first class of the Hall, in January 23, 1986, alongside such pioneers and greats as Elvis Presley, Little Richard, Chuck Berry, Buddy Holly, James Brown, Ray Charles and Sam Cooke.