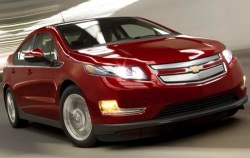 When President Obama won his office, many felt cheered and relieved that a savvy, well-spoken – "cool" – man of the people had replaced an incurious, inarticulate – embarrassing – aristocrat as "leader of the free world." But many right-wing media outfits and politicians have kept campaigning against Obama, and some have cast silly suspicion on the country’s first black president as a foreign-born Marxist that would "turn [the US] into a Muslim nation." And, since Obama routed some of the TARP bank bailout money to save General Motors, and some of the Recovery Act stimulus money to create a domestic electric car industry, many right-wingers have gone on to smear GM’s new electric car – the Chevy Volt. In the same silly fashion, some of these right-wingers have painted the car as an "exploding Obamamobile," made in China, that might leave you stranded in the Lincoln Tunnel. But (like Obama) the Chevy Volt is cool. You plug it into an electric socket in your garage overnight, and the next day drive it 35 miles solely on electric power, for about one-third the price of gasoline. After those 35 miles, whether you find yourself in the Lincoln Tunnel or anywhere else, the Volt’s gasoline motor switches on, and you can drive to the farthest coast getting 40 highway miles per gallon. If you never drive more than 35 miles, you practically never buy gas. And, by the acclaim of the automotive press and of those who own one, the Volt is a safe, trouble-free, well-performing, fun-to-drive vehicle. 39 owners reviewed the Volt at Edmunds’ website, giving it an average of five out of five stars. Here are some of the comments:

The best way that I can describe how the Volt drives and handles is that it is solid and extremely quiet. The doors close with a solid thud and when underway, the steering is connected to the road and the cabin is extremely quiet. … (2012-03-23)

I just purchased a Volt; great car: great performance, really fun to drive, amazing torque, very high quality build, been running it almost entirely on electricity (… radius of my daily driving is not more than 35 miles), the gasoline engine kicks in seamlessely to extend range to 300+ miles (at approx 40 mpg), and easy to recharge at night. … (2012-03-03)

This car is fantastic! — It’s as roomy as an entry level Mercedes Benz, zips around city streets like a sports car, handles like a BMW and is quieter than a Rolls Royce. … The interior is sleek and comfortable … According to my odometer, so far I’ve driven 1325 miles on 0.2 gallons of gas. (2012-02-16)

My wife and I had the privilege of having a 1999 GM EV1 when it was a prototype all electric car with a range of 90-110 miles. … We loved that car! When the EV1 was taken back by GM as part of the agreed up prototye lease agreement we kept waiting and looking for an alternative fuel replacement. …

The Volt meets nearly all my needs. It has an all electric range of 38-50 miles in my experience. … I am an engineer and this car is loaded with features. I feel GM could have badged this as a Cadillac. (2012-04-20)

These ratings are borne out by Consumer Reports’ survey finding the Chevy Volt number one in customer atisfaction. The Volt has also won the North American and Euro Car of the Year awards. And a citizen of the U.S.A. can take pride that this machine is designed, engineered and built in America, its factories in Flint, Hamtrammack, and elsewhere around Detroit, the good old heart of America’s auto industry. And you don’t have to say it of President Obama to say it of the Chevy Volt – it is all-American and cool.

During Special Report’s Political Grapevine segment tonight (7/14/09), Bret Baier announced …, “A U.S. soldier who has been ordered to Afghanistan is refusing to go… (saying) President Obama was not born in the United States and therefore is ineligible to be Commander-in-Chief. … (His) attorney is involved in a second case that challenges the legitimacy of the Obama presidency. The Los Angeles Times reports a California judge has agreed to hear the merits of that case.” As a banner on the screen read, “PERSISTENT PROBLEM” next to a photo of Obama and the U.S. Supreme Court, Baier added, “It is just one of dozens of legal challenges to the president’s nationality.”

But rather than inform his viewers that those “challenges” have been thoroughly debunked, Baier presented the issue as a he said/she said, adding, “At least two of them have already been dismissed by the Supreme Court. The White House press secretary again Monday brushed aside the matter, saying, quote, ‘The noble truth is that the president was born in Hawaii, a state of the United States of America.’” Baier never pointed out that Obama’s American birth certificate has been produced and authenticated.

Rep. Steve King of Iowa: He’s at least a Marxist. And he surely understands the Muslim culture.

CONSTITUENT: He surely does. That’s where he grew up with, that’s his culture.

KING: He doesn’t have an American experience. …

turn [the US] into a Muslim nation “Confessions of a Tea Party Casualty – Why GOP Rep. Bob Inglis is looking for a new job.” By David Corn – Mother Jones – Aug. 3, 2010

It was the middle of a tough primary contest, and Rep. Bob Inglis (R-S.C.) had convened a small meeting with donors who had contributed thousands of dollars to his previous campaigns. … “They were upset with me,” Inglis recalls. “They are all Glenn Beck watchers.” … “They say, ‘Bob, what don’t you get? Barack Obama is a socialist, communist Marxist who wants to destroy the American economy so he can take over as dictator. Health care is part of that. And he wants to open up the Mexican border and turn [the US] into a Muslim nation.'” Inglis didn’t know how to respond.

… Inglis, who served six years in Congress during the 1990s as a conservative firebrand before being reelected to the House in 2004, had also ticked off right-wingers in the state’s 4th Congressional District by urging tea-party activists to “turn Glenn Beck off” and by calling on Rep. Joe Wilson (R-S.C.) to apologize for shouting “You lie!” at Obama during the president’s State of the Union address. For this, Inglis, who boasts (literally) a 93 percent lifetime rating from the American Conservative Union, received the wrath of the tea party, losing to Gowdy 71 to 29 percent. And he’s … noting that Republican leaders are pushing rhetoric tainted with racism, that conservative activists are dabbling in anti-Semitic conspiracy theory nonsense, and that Sarah Palin celebrates ignorance.

right-wingers have gone on to smear “The Car the Right Wing Can’t Kill” By Froma Harrop – Real Clear Politics – April 5, 2012

The right-wing media had launched an outrageous smear campaign against it. As former GM executive Bob Lutz sarcastically put it, the Volt had become “the poster child for President Obama’s socialist meddling in the free automotive market.”

Lutz responded with special anger to a recent Bill O’Reilly Fox News show in which the host condemned the Volt as “an unmitigated disaster.” Joshing over the disappointing Volt sales, O’Reilly’s guest Lou Dobbs said, “It doesn’t work.” Also, “It catches fire.”

“Although we loaded the Volt with state-of-the-art safety features, we did not engineer the Volt to be a political punching bag,” GM Chief Executive Officer Dan Akerson said during a Congressional hearing on the Volt in January. “And that, sadly, is what the Volt has become.”

Republican presidential hopeful Newt Gingrich faulted the Volt for its lack of space for a gun rack. Front-runner Mitt Romney called it “an idea whose time has not come.” American Tradition Partnership Inc., a conservative group, referred to Volts as “exploding Obamamobiles.”

The video also says that the Volt is made in China. Some of them are, but only the models that are to be sold in China. US models are made by American workers mainly in the Detroit/Hamtramck Assembly plant, which was recently revived and has put American auto workers back on the assembly line

stranded in the Lincoln Tunnel “Fox Tests Volt, Runs Out Of Juice In Lincoln Tunnel” By Bertel Schmitt – The Truth About Cars – February 6, 2012 – (Fox News video)

The Volt boasts some of the most advanced engineering ever seen in a mainstream American automobile. The powertrain allows the car to run as an EV, a series hybrid, or a parallel hybrid, depending on how far you drive and how you drive. The secret sauce is how GM controls the powerflow between the 149-horse electricmotor, the generator, and the 84-horse,1.4-liter naturally aspirated internal-combustion engine. It’s fundamentally different from the way Toyota handles things in the Prius.

“While the advanced technologies in vehicles such as the Chevrolet Volt have the potential to address global transportation challenges, they have deep roots in the U.S., particularly in the state of Michigan, the birthplace of the American automotive industry,” said Tony Posawatz, Volt vehicle line director. “In addition to GM’s investments, suppliers and other partners are making major manufacturing and R&D investments in the U.S. and in Michigan to commercialize electrically driven transportation.”

I guess those of us without a garage are out of luck, though. Can’t wait for the day we have a little non-guzzler car we street parkers can feel proud of.

I hope one day you can plug in to the parking meter.