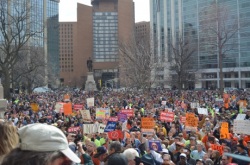 On the First of this month, Republican legislators and the Republican governor gave Indiana a so-called “right to work” law.1 2 Except to undercut it, such a law really has nothing to do with the Right to Work, and so should be renamed. For the reason that follows, let’s call it the “right to shirk” law. The true Right to Work is stated in the Universal Declaration of Human Rights, Article 23:3

The “right to shirk” law stifles free bargaining by banning a particular contract provision – that a non-union worker pay one’s fair share of the cost of union services.4 That ban weakens the union’s ability to protect the worker’s interests, thus undercutting the Right to Work. By federal rules, the union has the duty of fair representation, and must bargain for and defend all workers, union members or not, in the shop.5 So, under the “right to shirk” law, the worker in a shop where the union has been voted in has this choice: join the union and pay the dues, or shirk paying one’s fair share, and take a free ride on the backs of union members.

Sen. Rand Paul (R-KY) urges a federal “right to shirk” law to limit free bargaining, and asks you to be a “sledgehammer” against “forced unionism” — something that doesn’t exist.6

The House approved the law by a 54-to-44 margin, even though five Republicans joined Democratic lawmakers to oppose it.

The state Senate voted 28 to 22 in favor of the measure, with nine Republicans joining all 13 Democrats in voting against it.

A “right to work” law is a state law that stops employers and employees from negotiating an agreement – also known as a union security clause – that requires all workers who receive the benefits of a collective bargaining agreement to pay their share of the costs of representing them. Right to Work laws say that unions must represent every eligible employee, whether he or she pays dues or not. In other words, “Right to Work” laws allow workers to pay nothing and still get all the benefits of union membership.

“Right to Work” laws aren’t fair to dues-paying members. If a worker who is represented by a union and doesn’t pay dues is fired illegally, the union must use its time and money to defend him or her, even if that requires going through a costly, time-consuming legal process. Since the union represents everyone, everyone benefits, so everyone should share in the costs of providing these services. Amazingly, nonmembers who are represented by a union can even sue the union is they think it has not represented them well enough!

Throughout the years a legal principle has been developed by the National Labor Relations Board called “the duty of fair representation” (DFR). This legal principle quite simply states that a union must represent all workers equally and without prejudice. A union cannot refuse to represent or improperly represent a worker due to the worker’s age, race, creed, nationality, sex, religion, political beliefs, union status or personality. If a union fails to represent a worker due to prejudice, or hostility, the union can be charged.

The duty to represent all workers is especially true in the case where a non-member or anti-union worker files a grievance. Personal feelings or the feelings of the membership cannot be allowed to interfere with the processing of that person’s grievance.

Q: Without a “right to work” law, can a worker be forced to join a union?
A: No. The U.S. Supreme Court has ruled that no collective bargaining agreement can require anyone to join a union. Unions and employers may only negotiate contract provisions requiring nonmembers to pay their fair share of the union’s costs in representing them.

Q: Does a union security clause require nonmembers to pay full union dues?
A: No. Nonmembers are required to pay only the proportion of union dues related to collective bargaining expenses, so these costs are fairly shared by all represented employees.

← How to Read the Bible in Two Hours
Cut Short 60 Years Ago, Hear Now the Music of the Moondog Coronation Ball →
Subscribe
Login
0 Comments
Inline Feedbacks
View all comments