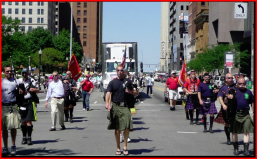 On the last day of March, Ohio governor John Kasich signed the Republicans’ anti-democratic law, Senate Bill 5 (SB5). Soon after, a citizens alliance began using the state’s democratic public referendum law to repeal it.1 9 With 40-some clauses that weaken workers and their unions, SB5 practically cancels the public worker’s right to collective bargaining, which is a form of workplace democracy. 6 2 7 SB5 has two clauses that seriously weaken workers’ bargaining leverage.8 One clause, SB5‘s first, totally bans strikes. The other bans arbitration in case of no agreement, and lets the public employer choose its own last offer. SB5 also has clauses that weaken the contract. Two ban bargaining for the major benefits of health insurance and retirement. Another allows a public employer to break the employment contract, if the state auditor declares a fiscal watch. Other SB5 clauses weaken the union. For instance, one bans fair share payment by non-union workers to the union for costs of bargaining and upholding their contract. Another classifies more workers as “supervisors”, ineligible for union membership. Yet another bans any bargaining to limit privatization, or compensate the worker for it. But Ohio’s public referendum law empowers citizens to repeal a new law — though it isn’t easy.3 First, a citizens committee gets its ballot language approved by the secretary of state, after which the new law goes on hold until the referendum process plays out. Then the committee has 90 days from the time the newly-passed law was filed to gather the valid signatures of 6% of the electorate that voted in the last governor’s race, with at least 3% in each of half of the state’s counties. For the referendum on SB5, that meant 231,149 valid signatures, and about 450,000 signatures total to ensure enough valid ones.4 But the committee got thousands of volunteers to circulate petitions, and ended up with 1,298,301 signatures — nearly three times the goal — from all 88 counties.5 Last Wednesday, one day before the deadline, a parade of 6,000 people and a semi-truck marched through Columbus to deliver the petitions in 1,502 boxes to the secretary of state. Next, the petitions will go to the county boards of elections for validation. And in November Ohio will, with hardly a doubt, hold a public referendum on SB5.

Video: Unloading the petitions from the semi-truck.

MADDOW:  How will Democrats and the Democratic base get those many, many signatures you guys need in the next 90 days to get a ballot referendum?  I mean, 231,000 signatures is a very high bar.

STATE REP. ARMOND BUDISH (D), OHIO:  And that‘s 231,000 valid signatures.  We‘re going to have to collect 450,000 signatures or more to get the right number that are valid.  And what we‘re going to do, we‘re going to work like hell and fight like hell to do it.  That‘s all we can do.

MADDOW:  Members of the grassroots group We Are Ohio delivering 1.3 million signatures to the Kasich administration today—one day early and five times the required number.
They held a parade in Columbus before they delivered the signatures today.  Beforehand, they expected about 1,000 people to show up for the parade.  They got more than about 6,000, according to the local press.

The signatures delivered in 1,502 separate boxes.  They came in from all of Ohio‘s 88 counties.

If about, again, 230,000 of those 1.3 million signatures are validated, that means that the repeal of this union-stripping thing will be on the ballot in Ohio on November 8th.  So far, statewide polling suggests that a clear majority of Ohioans will vote to repeal the union-stripping law.

(9) We Are Ohio – citizens group for repealing SB5

I know that there are plenty of people that are still pro union, so I am opening myself up to comments from those people. I used to belong to a union and i really think that they are a waste of time and money. Unions have outlived their purpose because there are laws in place now to protects workers.

For example, there are minimum ages laws, workman’s comp laws, minimum age requirements and many other protections that didn’t exist when unions first came onto the scene.

We don’t need them anymore! they are dinosaurs that should be allowed to become extinct.

We need unions to maintain workplace standards, hours, wages, keep a large middle class, and to have a little democracy at work. Government and big business did not just give these things to us — union members fought and died for them.

Since union membership has declined, wages have stagnated. And just this month Republican congressmen held a hearing on disqualifying many more workers for overtime pay. Workers need more power, and that means more union shops.