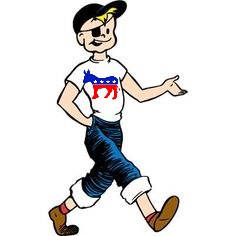 In the U.S. House of Representatives, Democrats seem to legislate and investigate like walking and chewing gum. Since taking control in January, they have passed some 178 bills. And they are now pursuing investigations into some 20-plus questions of Trump administration malfeasance.

McConnell has been playing his self-proclaimed role as “the grim reaper” of progressive legislation. Here is a list of some of the more important bills that he is blocking — plus a notable resolution:

Here is a list of acts of Congress vetoed by President Trump:

Here is a list of some of the more important bills that have become law:

Taken from the Washington Post on May 23, here are some of the more important questions of Trump malfeasance and corruption being investigated by the House:

Image: The Paragraph from Comic Vine and WikiMedia Commons

20-plus questions “All the congressional investigations of Trump that aren’t related to the Mueller report” By Amber Phillips; Washington Post; May 23, 2019

self-proclaimed role “McConnell pledges to be ‘Grim Reaper’ for progressive policies” By Jordain Carney; The Hill; 04/22/19

eleven bills “Democrats in Congress are getting things done. Trump and Republicans are just ignoring them.” By Ella Nilsenella; Vox; May 24, 2019

strengthens the VAWA “The NRA tried to block an updated Violence Against Women Act in the House — and failed” By Li Zhouli, Vox; Apr 4, 2019

had been killed “Internet Freedom Fight Keeps On” The Paragraph;
June 23, 2018″

get around Congress “Trump Vows Veto After Congress Blocks His Order To Build Border Wall”; by Susan Davis; Heard on All Things Considered; March 14, 2019

important questions “All the congressional investigations of Trump that aren’t related to the Mueller report” By Amber Phillips, Washington Post; May 23, 2019