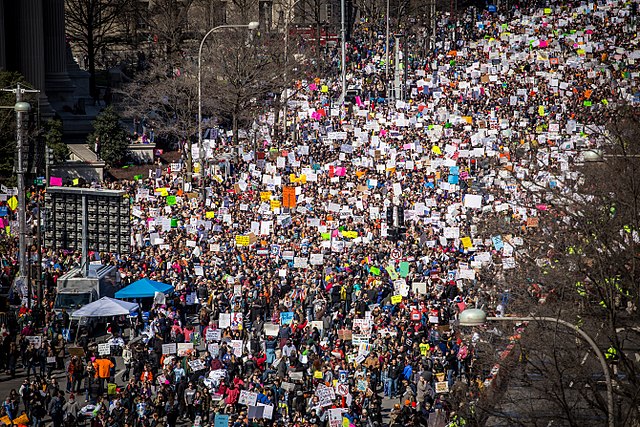 Not long after the Marjory Stoneman Douglas High School shooting massacre on February 14th in Parkland, Florida, many students of the school organized to cut gun violence in the USA. And their aim was true and clear. One of the students that expressed that aim was Emma Gonzalez. Just three days after the massacre, she gave a famous speech, which wound up with:

If you agree, register to vote. Contact your local congresspeople. Give them a piece of your mind.

Let’s look at some of the facts that back up Gonzales’s statements, and call to action.

The NRA has become a fanatical political lobby.

Politicians who sit in their gilded House and Senate seats funded by the NRA telling us nothing could have been done, we call BS.

Founded in 1871 to advance marksmanship and firearms safety, the NRA kept to that mission for more than 100 years. But in 1977 hardliners took over the organization, and turned it into the nation’s foremost gun lobby. Now, the NRA spends millions for politicians that block any and all gun control legislation. And in 2016, it spent $31 million on just one race — to elect Donald Trump president. Meanwhile, on the income end, both gun manufacturers and individuals contribute millions to the NRA.

For the apparent purpose of keeping those individual contributions flowing, the NRA pumps out fearful — and dangerous-sounding — political propaganda. For example, earlier this year the home page of its website featured its CEO, Wayne LaPierre, decrying a “terrifying” “socialist wave.”
And a recent NRA ad darkly warns of “They:”

However, some NRA members commented against the ad. Here is one of those comments, which raised an important point:

As a strong supporter of gun rights, I am flabbergasted and appalled by this “ad.” How embarrassing for you to promote hate and fear, especially within the context of gun ownership (a place where hate and fear must be kept *most* in check).

Gun control laws work all around the world.

They say tougher guns laws do not decrease gun violence. We call BS.

The United States’ assault weapons ban of 1994 to 2004 showed a reduction in crime using the banned weapons. But, because the law had grandfathered-in millions of assault weapons and high-capacity magazines, the overall reduction was negligible.

But Australia, which Gonzales mentioned in her speech, had a different story. Prompted by a massacre of 35 people by semi-automatic rifle in 1996, Australia banned those weapons later that same year. The country also bought back the banned weapons, and accepted other weapons voluntarily turned in, resulting in a 20% cut in the number of guns among the population. The law also brought stricter gun licensing and registration. And studies strongly point to the law helping to bring down gun death and injury. Incidence of gun homicide was down 43% (from .43 to .25 per 100,000), and of gun suicide down 58% (from 2.6 to 1.1 per 100,000). And gun massacre (of four or more people at once, excluding familicide) was down to zero (from 13 over 18 years to none over 22 years). 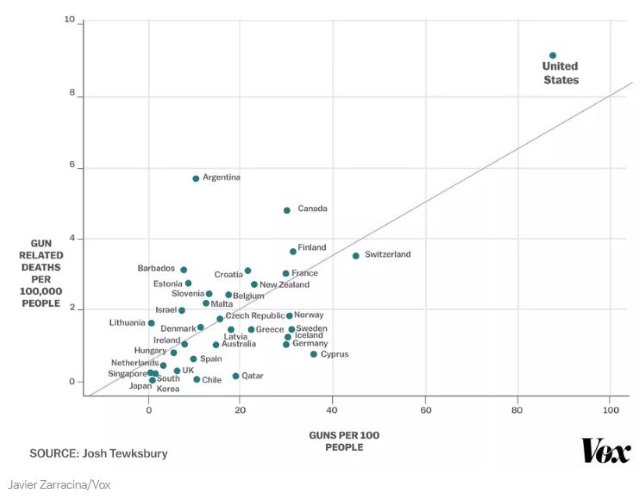 #GunFail series of blog postings, which has tracked news reports of accidental shootings from 2013 to 2017. Of those thousands of incidents, here are some from a post on July 3, 2017:

We had a campus concealed carrier in Utah accidentally fire the weapon in his backpack in the middle of a Utah Valley University food court. …

… [T]hat is the second time UVU has made the GunFAIL list, the first being in May 2015, when one police academy cadet accidentally shot another while taking his gun apart, forgetting there was a round in the chamber. Back in 2012, a student at Weber State University in Ogden, Utah, accidentally discharged his concealed weapon. And it was in Taylorsville, Utah, in September 2014 when a sixth grade teacher injured herself when she accidentally shot and shattered a toilet in the faculty bathroom with her (not very well) concealed handgun.

So, you know, keep that all in mind as more states begin to permit campus carry and allow teachers to arm themselves in the classroom.

While there are cases where people successfully use a gun to protect themselves, there are many more cases of accidental shooting death or injury. The website, shootingtracker.com, which Gonzales mentioned in her speech, lists and classifies all reported shooting incidents. Between April 3rd and July 7th this year, there were 227 defensive usages that stopped a crime, but almost twice as many (448) accidental shootings, most (385) of which caused death or injury.

Assault rifles are too lethal for civilian use.

They say guns are just tools like knives and are as dangerous as cars. We call BS.

Of course, guns are more deadly than knives, and, unlike the car, are designed to kill. Especially dangerous, among firearms available to persons in the USA, are assault rifles, which are designed for war. One such assault rifle, the AR-15, has been used several recent mass-shootings, including Parkland. The AR-15 fires a bullet at three times the velocity of a typical handgun. Heather Sher, a radiologist that worked on Parkland massacre victims, said:

The injury along the path of the bullet from an AR-15 is vastly different from a low-velocity handgun injury. … The high-velocity bullet causes a swath of tissue damage that extends several inches from its path. It does not have to actually hit an artery to damage it and cause catastrophic bleeding. Exit wounds can be the size of an orange.

One of my ER colleagues was waiting nervously for his own children outside the school. While the shooting was still in progress, the first responders were gathering up victims whenever they could and carrying them outside the building. Even as a physician trained in trauma situations, there was nothing he could do at the scene to help save the victims who had been shot with the AR-15. Most of them died on the spot; they had no fighting chance at life.

As a doctor, I feel I have a duty to inform the public of what I have learned as I have observed these wounds and cared for these patients. It’s clear to me that AR-15 and other high-velocity weapons, especially when outfitted with a high-capacity magazine, have no place in a civilian’s gun cabinet.

You have no constitutional right to an AR-15.

They say no laws could have prevented the hundreds of senseless tragedies that have occurred. We call BS.

We have seen that tougher gun laws work. But are they constitutional? In the 18th century, some of the states were worried that Congress, which had the power to arm the militia, might disarm it and leave state authorities defenseless against insurrection, slave revolt or Indian attack. So, James Madison quelled that worry with the Second Amendment:

A well regulated Militia, being necessary to the security of a free State, the right of the people to keep and bear Arms, shall not be infringed.

For many years, the well regulated militia has been the National Guard. So, the Second Amendment, like the Third Amendment, had become a useless relic — until 2008. That was when the Supreme Court, thew out long-established precedent, and created out of the Second Amendment a right to keep a registered and licensed loaded handgun at home, on the grounds of self-defense. To do that, Justice Antonin Scalia, the self-avowed constitutional literalist, discounted the plain purpose literally expressed in the first half of the Second Amendment. Then, overlooking the arguments at the time of the Bill of Rights being written, he reached back to a 17th century English law, to try to justify the new right that he created.

But even Scalia did not claim an unlimited right. His opinion said that “dangerous and unusual weapons” are not protected. Bans on concealed weapons, and bans on weapons in places like schools and other public buildings, by his opinion, are still constitutional. As we have seen, assault rifles like the AR-15 are unusually dangerous, so would not be protected by Scalia’s new self-defense-by-gun constitutional right.

You have a constitutional right “peaceably to assemble, and to petition the Government for a redress of grievances.”

That us kids don’t know what we’re talking about, that we’re too young to understand how the government works. We call BS.

On March 14, the one month mark from the Parkland massacre, one million students walked out of 3000 schools across the nation. The students commemorated the Parkland high school students that were killed with 17 minutes of silence — one for each student killed. Later, on Saturday, March 24, millions again turned out for the “March for Our Lives,” in which students across the nation peaceably assembled to petition the Government for a redress of grievance. That grievance is the long lack of legal action to cut gun violence across the nation. The March for Our Lives movement lists the legal action it seeks:

In addition to peaceable assembly, the students have pushed for registering and encouraging citizens to vote on this issue. So, these actions look to be the very height of democracy in action. And the students keep at it. They are now on a summer barnstorming tour of the country to speak for sensible gun control and to register young people to vote.

Image: By Phil Roeder from Des Moines, IA, USA (March for Our Lives) [CC BY 2.0, via Wikimedia Commons] March for our Lives on Pennsylvania Avenue ,Washington, D.C., March 24, 2018.

aim was true and clear March for Our Lives Mission Statement

hardliners took over “How the NRA resurrected the Second Amendment” By German Lopez, Vox; 2018-05-04

spent $31 million “The 10 Politicians Who Have Benefited the Most From NRA Funding” By CHRIS MORRIS, Fortune; February 15, 2018

radiologist that worked “What I Saw Treating the Victims From Parkland Should Change the Debate on Guns” By HEATHER SHER; The Atlantic; FEB 22, 2018

Second Amendment “The Bill of Rights: A Transcription – Amendment II” – The National Archives of the USA

Third Amendment “The Bill of Rights: A Transcription – Amendment III” – The National Archives of the USA

created out of the Second Amendment “US Supreme Court – District of Columbia v. Heller” – Syllabus

lists the legal action “March for Our Lives – Mission Statement