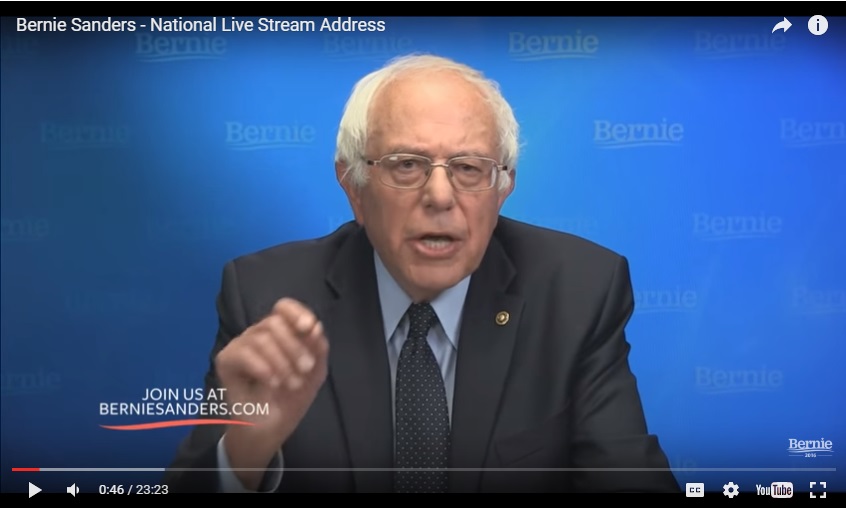 The last of the primaries has occurred, and the Bernie Sanders campaign has, practically speaking, fallen short of one of its aims — to put Sanders in the White House. But the campaign made a pretty good swipe at it, and along the way brought out millions to rally, canvas and vote in a call for a political revolution to transform America. Sanders addressed [transcript] those millions Thursday to take stock of the political revolution and chart the path forward. A summary of the main points along the path follows:

“This campaign has never been about any single candidate. It is always about transforming America.”

To me, this transformation means getting back to the nation’s core values: re-dedicating itself to the proposition that all men are created equal and enabling the pursuit of happiness, making an ever more perfect union to secure the blessings of liberty to our posterity, and truly bringing government of, by and for the people. More specifically …

It is about ending a campaign finance system which is corrupt and allows billionaires to buy elections.

It is about ending the grotesque level of wealth and income inequality that we are experiencing where almost all new wealth and income goes to the people on top, where the 20 wealthiest people own more wealth than the bottom 150 million.

It is about creating an economy that works for all of us, not just the 1 percent.

It is about ending the disgrace of having the highest level of childhood poverty of almost any major country on earth and having public school systems in inner cities that are totally failing our children – where kids now stand a greater chance of ending up in jail than ending up with a college degree.

It is about ending the disgrace of tens of thousands of Americans dying every year from preventable deaths because they either lack health insurance, have high deductibles or cannot afford the outrageously high cost of the prescription drugs they need.

It is about ending the disgrace of hundreds of thousands of bright young people unable to go to college because their families are poor or working class, while millions more struggle with suffocating levels of student debt.

It is about ending the pain of a young single mother in Nevada, in tears, telling me that she doesn’t know how she and her daughter can make it on $10.45 an hour. And the reality that today millions of our fellow Americans are working at starvation wages.

It is about ending the disgrace of a mother in Flint, Michigan, telling me what has happened to the intellectual development of her child as a result of lead in the water in that city, of many thousands of homes in California and other communities unable to drink the polluted water that comes out of their faucets.

It is about ending the disgrace that, in a given year, corporations making billions in profit avoid paying a nickel in taxes because they stash their money in the Cayman Islands and other tax havens.

“This campaign is about defeating Donald Trump, the Republican candidate for president.”

Sanders gives a terse summary of why Trump must be defeated.

“We must continue our grassroots efforts to create the America that we know we can become. And we must take that energy into the Democratic National Convention on July 25 in Philadelphia where we will have more than 1,900 delegates.”

Sanders aims to push a progressive platform at the convention, and to transform the Democratic Party.

I recently had the opportunity to meet with Secretary Clinton and discuss some of the very important issues facing our country and the Democratic Party. … I look forward, in the coming weeks, to continued discussions between the two campaigns to make certain that your voices are heard and that the Democratic Party passes the most progressive platform in its history and that Democrats actually fight for that agenda. I also look forward to working with Secretary Clinton to transform the Democratic Party so that it becomes a party of working people and young people, and not just wealthy campaign contributors: a party that has the courage to take on Wall Street, the pharmaceutical industry, the fossil fuel industry and the other powerful special interests that dominate our political and economic life.

“The political revolution … means that, at every level, we continue the fight to make our society a nation of economic, social, racial and environmental justice.”

Sanders ends this passage with a call for backers to run for state and local office. Within 24 hours nearly 6700 inquired about running, and thousands more inquired to volunteer for those who run. Those that expressed interest in running cover 51 percent of state house districts, 69 percent of state senate districts and every congressional district in the country.

It means that we can no longer ignore the fact that, sadly, the current Democratic Party leadership has turned its back on dozens of states in this country and has allowed right-wing politicians to win elections in some states with virtually no opposition – including some of the poorest states in America. The Democratic Party needs a 50-state strategy. We may not win in every state tomorrow but we will never win unless we recruit good candidates and develop organizations that can compete effectively in the future. …

[T]he Democratic Party needs leadership which is prepared to open its doors and welcome into its ranks working people and young people. That is the energy that we need to transform the Democratic Party, take on the special interests and transform our country.

Here is a cold, hard fact that must be addressed. Since 2009, some 900 legislative seats have been lost to Republicans in state after state throughout this country. In fact, the Republican Party now controls 31 state legislatures and controls both the governors’ mansions and statehouses in 23 states. That is unacceptable.

We need to start engaging at the local and state level in an unprecedented way. Hundreds of thousands of volunteers helped us make political history during the last year. These are people deeply concerned about the future of our country and their own communities. Now we need many of them to start running for school boards, city councils, county commissions, state legislatures and governorships. …

I hope very much that many of you listening tonight are prepared to engage at that level. Please go to my website at berniesanders.com/win to learn more about how you can effectively run for office or get involved in politics at the local or state level.

“And when we talk about transforming America, it is not just about elections. … We need people who are dedicated to public service …

Sanders calls for productive, beneficial work for Americans in both the public and private sectors.

When we talk about a Medicare-for-all health care program and the need to make sure all of our people have quality health care, it means that we need tens of thousands of new doctors, nurses, dentists, psychologists and other medical personnel who are prepared to practice in areas where people today lack access to that care.

It means that we need hundreds of thousands of people to become childcare workers and teachers so that our young people will get the best education available in the world.

It means that as we combat climate change and transform our energy system away from fossil fuels, we need scientists and engineers and entrepreneurs who will help us make energy efficiency, solar energy, wind energy, geothermal and other developing technologies as efficient and cost effective as possible.

It means that as we rebuild our crumbling infrastructure, we need millions of skilled construction workers of all kinds.

It means that when we talk about growing our economy and creating jobs, we need great business people who can produce and distribute the products and services we need in a way that respects their employees and the environment.

In other words, we need a new generation of people actively involved in public service who are prepared to provide the quality of life the American people deserve.

that when future historians look back and describe how our country moved forward into reversing the drift toward oligarchy, and created a government which represents all the people and not just the few, they will note that, to a significant degree, that effort began with the political revolution of 2016.

pursuit of happiness “The Declaration of Independence: A Transcription” – National Archives

more perfect union “The Constitution of the United States: A Transcription” – National Archives