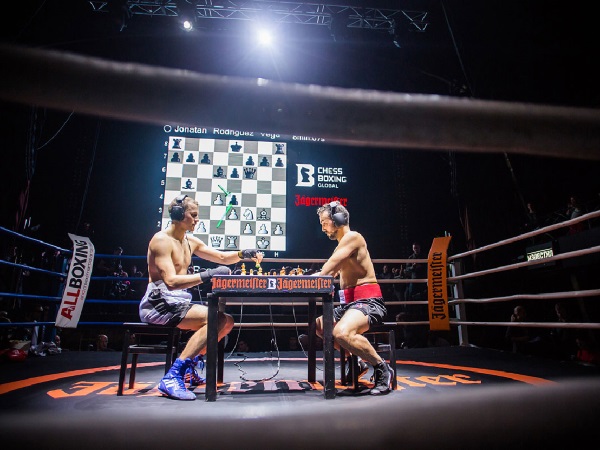 Several days ago, as I went through my copy of Mother Jones, my interest was caught by a photograph and note about something new to me — the sport of chessboxing. I have long thought chess to be the equivalent of boxing, each being the greatest one-on-one sport in its sphere — chess in the mental, boxing in the physical. I also think that chess, like boxing, is a good spectator sport, and that it should be reported on the sports page. So, here in chessboxing is a sport that seems to jibe well with these notions of mine. Chessboxing’s creator, Iepe Rubingh, says of it, “We bring a combination of the number one thinking sport with the number one fighting sport.” And its promoters bill chessboxing as “the ultimate battle between men.”

Here’s how chessboxing works: The fighters go eleven three-minute rounds, alternating between chess and boxing. The six rounds of chess allow for an eighteen minute game — so each fighter starts with nine minutes on his chess clock. A fighter wins by checkmate, knockout, opponent’s chess clock time running out, or technical knockout.

After a boxing round, the fighters get a minute to gather their thoughts for the coming chess round. This is a very tough part of chessboxing — being able to calm down after three minutes of boxing, so as not to blunder on the chess board.

The following video shows clips (starting at 7:25) of the middleweight championship match in Moscow, 2013, with champ Sven Rooch of Berlin defending against Jonatan Rodriguez-Vega of Spain.
Video: “Chess Boxing – With Brain and Brawn” – DW Journal

Just a few days ago, as I began breakfast, I noticed something new on my Wheaties box — a picture of Ultimate Fighting Champion Anthony Pettis. Wheaties boxes have long pictured top athletes, but this is the first appearance for the sport of mixed martial arts. So, while the Wheaties folks are adding sports, why not a chess champion on a Wheaties box? Or, maybe someday, a chessboxer?

says of it “The World Championship of Chessboxing” by Journeyman Pictures