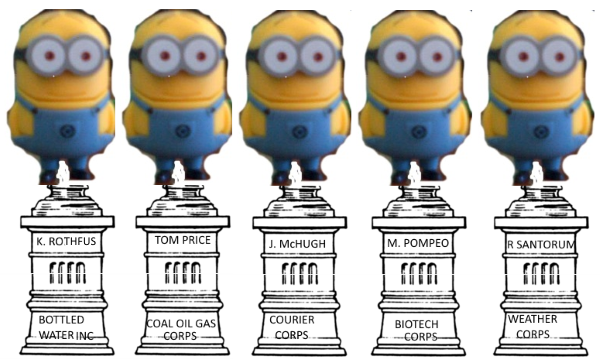 In a representative democracy legislators are supposed to guard and advance the welfare of the people. But some have blatantly and shamefully brushed the people aside, and proposed laws that mainly guard and advance the profits of the big corporation. I think that such officials should be recognized and forever banished from public office. To that end, here are a few cases of such officials that are still holding or vying for public office in the U.S.A. You might come up with some more blatant or more urgent cases that should go ahead of these — but still I think these five worthy of nomination to the Congressional Corporate Toady Hall of Shame.

Rep. Keith Rothfus (R-PA), who is “carrying the water” for the bottled water industry. The U.S. Park Service has allowed parks to stop selling bottled water, instead selling refillable water bottles and providing free water filling stations. About 20 parks, among them Grand Canyon and Mount Rushmore, have adopted the policy, saving many tons of plastic bottle waste. A few weeks ago, Rothfus introduced a last-minute amendment to an appropriations bill to ban the Park Service from using any tax money to eliminate disposable plastic bottles in parks.

Rep. Tom Price (R-GA), who is “greasing the wheels” of the fossil fuel industry. The Pentagon and the Central Intelligence Agency have for years been studying to stay on top of the national security effects of global warming climate change, which is mainly caused by use of fossil fuels. Last year, the Pentagon published a “Climate Change Adaptation Roadmap” to minimize impacts of climate change on Department of Defense missions and its ability to protect national security. And since 2008, intelligence agencies have been sizing up the geopolitical consequences of climate change. Earlier this year, Price proposed to cut Pentagon and CIA funding for sizing up and planning for threats to national security from climate change.

Former Rep. John McHugh (R-NY), who “delivered the goods” for the private courier industry. Started by Ben Franklin, the U.S. Postal Service is older than the United States itself. In 2006, it was self-sufficient, running a surplus, and planning to convert much of its fleet of delivery vehicles to all electric. And it was fulfilling its mandate to deliver mail to every address in the country, and for less than 50 cents a letter. McHugh proposed a bill with a poison pill to require the Postal Service to fund its pensions out for 75 years, within 10 years — something not required of any other agency. Republicans passed the bill on a voice vote and President George W. Bush signed it into law, costing the Postal Service $5 billion a year, changing its surplus into a deficit, and canceling its facilities improvement plans. Since then, privatization fanatics have seized on that manufactured deficit crisis to cut back on delivery service and close post offices. McHugh is now Secretary of the Army.

Rep. Mike Pompeo (R-KS), who is “growing the green” for the biotech industry. Genetically-engineered (GE) crops are products of gene splicing and cannot occur naturally. Many contain genes from a different species — or a different kingdom, such as corn with bacterial genes for tolerating herbicides. As GE crops interact with nature, problems have arisen, such as herbicide-resistant weeds, and GE genes contaminating the crops of non-GE and organic farmers. 64 countries have laws requiring labeling of these Frankenstein-like foods. In the U.S., Vermont, Connecticut and Maine have GE labeling laws and 17 other states have moved to require GE labeling. Also, several states and many counties have put GE regulations in place and created GE-free zones. Pompeo proposed a bill that would ban states and localities from requiring labeling or doing any GE oversight whatsoever, and that would nullify all current state and local GE laws. Last week, the House passed that bill.

Former Sen. Rick Santorum (R-PA), who tried to “make it rain” for the commercial weather industry. The U.S. Weather Service has since 1910 issued regular weather reports to the public. In 2005, Santorum proposed a bill to ban that service, so that the public would have to go through a commercial weather company to get the information that the Weather Service had gathered using taxpayer dollars. One such weather company is the Pennsylvania-based AccuWeather, whose executives have contributed to Santorum’s election campaigns. Santorum is now a candidate for the Republican nomination for president.

Rothfus introduced “How Big Water is trying to stop the National Park Service from cleaning up plastic bottles fouling the parks” by Lisa Rein; The Washington Post; 2015-07-13

Pompeo proposed “The Monsanto Protection Act is Back, and Worse Than Ever” – Center for Food Safety; June 15th, 2015