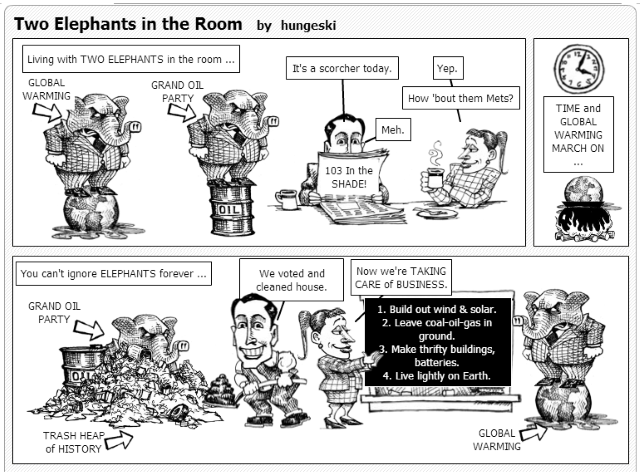 Grand Oil Party: What the G.O.P. stands for in the modern Republican Party. From Ronald Reagan to those that control today’s Congress and the majority of state houses, the Grand Oil Party. has habitually acted to protect and boost the fossil fuel industry and its profits — and to slow the spread of wind and solar energy.

Elephant in the Room: An obvious, but ignored problem. Pope Francis, in his recent encyclical “On Care for Our Common Home,” points out some reasons for this:

Obstructionist attitudes … can range from denial of the problem to indifference, nonchalant resignation or blind confidence in technical solutions.

I would fall into the “nonchalant resignation” category. I’m reluctant to bring up an unpleasant topic that might lead to yelling or bumming someone out, when it might not do much good anyway. Still, I think it important that we Earth-dwellers all know — and know that we all know — the facts of our situation. Pope Francis continues:

We require a new and universal solidarity. As the bishops of Southern Africa have stated: “Everyone’s talents and involvement are needed to redress the damage caused by human abuse of God’s creation”. [22] All of us can cooperate as instruments of God for the care of creation, each according to his or her own culture, experience, involvements and talents.

The Second Elephant: The elephant is the apt emblem of the Grand Oil Party. It is the second elephant in the room, blocking action on, or even sight of, the first elephant — that of global warming.

The Facts of Our Situation:

Cartoon by hungeski created on the Funny Times Cartoon Playground.

blocking action on “Stupidity of US congress now an impediment to global climate treaty” by VL Baker; Daily Kos; 2015-06-03

facts of our situation IPCC, 2013: Summary for Policymakers