St. Augustine described the nature of God as a circle whose centre was everywhere, and its circumference nowhere.

The scientific method runs from observing the physical world, to making a theory that describes and predicts its behavior, to testing the prediction. The best theory accounts for the most behavior in the simplest terms. Albert Einstein brought forth the theory of general relativity, and defined it with ten mathematical equations. But, he found that he could simplify to one equation with the assumption that, in the long view, the universe is the same everywhere — without much variation, without direction, without a single center. That assumption is called the cosmological principal.

Heat Map of the CMB

Further observation has borne out the cosmological principal. Looking up in any direction, we find the same types of galaxies, which are bunched into galactic clusters, which are strung into superclusters. As we look further out, we look further back in time. To the Sun we look back eight minutes — the time it takes light to travel from there to Earth. To the center of our galaxy, we look back 26,000 years; to the next nearest major galaxy (Andromeda), 2.3 million years; to the nearest large galactic cluster (Virgo), 52 million years; to the next nearest large supercluster (Centaurus) 140 million years. And to the furthest point we can see, we look back 13.7 billion years — just 380,000 years after the Hot Big Bang. That furthest point is at the Cosmic Microwave Background (CMB). We find the CMB in every direction up. And its heat map is without much variation — in fact, it is 99.999% uniform. From any other galaxy in the universe, an observer that looked up would see virtually the same picture that we do. 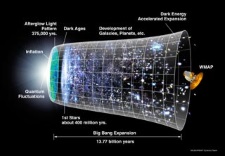 Timeline of the Universe

What lies beyond and back in time before the CMB we cannot directly see, because the universe was then opaque. But the CMB, by its very presence, and the intensities of energy over its frequency spectrum, fulfills predictions of the Big Bang Theory — the current standard model of the universe. So we know that there was a Hot Big Bang — when the universe was extremely hot, dense, and rapidly expanding. And by its highly-uniform heat map, the tiny temperature variations across the heat map, and the imprint of gravity waves in the heat map’s variations, the CMB fulfills predictions of Cosmic Inflation Theory. So, though we await confirmation of the gravity waves finding, which was just announced this year, it is now likely that our universe’s region of space inflated — stretched from sub-atomic size to macro size in a split instant. As inflation ended, much of its expansion energy may have changed into particles, changing the universe from extremely cold and empty with accelerating expansion to extremely hot and dense with decelerating expansion, and feeding into the Hot Big Bang.

What lies beyond and back in time before the onset of cosmic inflation? We don’t know, but by most variants of Cosmic Inflation Theory, cosmic inflation goes on forever, screamingly stretching space. And if cosmic inflation has fed into one hot big bang and popped-out one universe, then it would also pop-out many, or infinitely, more such universes. So Cosmic Inflation Theory, which has many correct (and no known incorrect) predictions, also predicts parallel universes! And the march of science goes on: As one wonder is described, proven and woven into the tapestry of human knowledge, another arises — it too wanting description and proof. Emerson writes:

Our life is an apprenticeship to the truth, that around every circle another can be drawn; that there is no end in nature, but every end is a beginning; that there is always another dawn risen on mid-noon, and under every deep a lower deep opens.

Universe: Brian Greene writes: “There was a time when “universe” meant “all there is. … Sometimes “universe” still connotes absolutely everything. Sometimes it refers only to those parts of everything that someone such as you or I could, in principle have access to. Sometimes it’s applied to separate realms, ones that are partly or fully, temporarily or permanently, inaccessible to us; in this sense, the word relegates our universe to membership in a large, perhaps infinitely large, collection.”

Image: Map of the visible universe centered on our galactic supercluster (Virgo). – atlasoftheuniverse.com

black hole in Sagittarius “Towards the Center of the Milky Way” by Quinn Hungeski, The Paragraph, 2006-03-21

To the center of our galaxy “The Milky Way Galaxy” – NASA

to the next nearest major galaxy “The Local Group” – NASA

to the nearest large galactic cluster “A List of Nearby Galaxy Groups” – atlasoftheuniverse.com

to the next nearest large supercluster “The Neighboring Superclusters” – atlasoftheuniverse.com

Cosmic Microwave Background “The Universe According to Planck (The Satellite)” – Matt Strassler; March 21, 2013

intensities of energy “Which Parts of the Big Bang Theory are Reliable, and Why?” – Matt Strassler; March 26, 2014

highly-uniform heat map “Which Parts of the Big Bang Theory are Reliable, and Why?” – Matt Strassler; March 26, 2014

Parallel universes. Quantum leaps between times – a la “Back to the Future.” Thanks for the lucid description of why these concepts work.