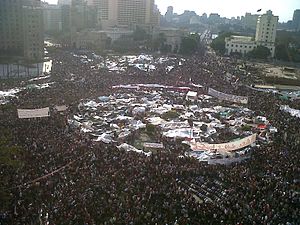 Between the Arab Spring uprising in Egypt, and its successor Occupy uprising in America, President Obama has had different reactions.1 On January 28th, right after police cracked-down on Egyptian protesters to clear Tahrir Square in Cairo, President Obama made strong remarks:2 3

As the situation continues to unfold, our first concern is preventing injury or loss of life. So I want to be very clear in calling upon the Egyptian authorities to refrain from any violence against peaceful protesters.

The people of Egypt have rights that are universal. That includes the right to peaceful assembly and association, the right to free speech, and the ability to determine their own destiny. These are human rights. And the United States will stand up for them everywhere.

But we’ve always been clear that there must be reform: political, social, and economic reforms that meet the aspirations of the Egyptian people. In the absence of these reforms, grievances have built up over time. … 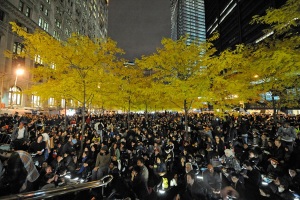 On Tuesday last week, right after police cracked-down on Occupy Wall Street protesters to clear Zuccotti Park in New York City, President Obama made no remarks on the event.4 But his press secretary did answer a question about the president’s reaction:5

[T]he President’s position is that obviously every municipality has to make its own decisions about how to handle these issues, and we would hope and want, as these decisions are made, that it balances between a long tradition of freedom of assembly and freedom of speech in this country and obviously of demonstrating and protesting, and also the very important need to maintain law and order and health and safety standards, which was obviously a concern in this case.

Occupy Wall Street is a people-powered movement that began on September 17, 2011 in Liberty Square in Manhattan’s Financial District, and has spread to over 100 cities in the United States and actions in over 1,500 cities globally. #ows is fighting back against the corrosive power of major banks and multinational corporations over the democratic process, and the role of Wall Street in creating an economic collapse that has caused the greatest recession in generations. The movement is inspired by popular uprisings in Egypt and Tunisia, and aims to expose how the richest 1% of people are writing the rules of an unfair global economy that is foreclosing on our future.

2) ‘Bloody and bruised: the journalist caught in Egypt unrest’ by Jack Shenker, The Guardian, Wednesday 26 January 2011

“The police attacked us to get us out of the square; they didn’t care who you were, they just attacked everybody,” a lawyer standing next to me, Ahmed Mamdouh, said breathlessly. “They … hit our heads and hurt some people. There are some people bleeding, we don’t know where they’re taking us. I want to send a message to my wife; I’m not afraid but she will be so scared, this is my first protest and she told me not to come here today.”

Such unnecessary force has become a feature of law enforcement operations against the Occupy movement in recent weeks. Scott Olsen, a former U.S. Marine and Iraq war veteran, suffered a fractured skull and brain injuries in October after being hit by a tear gas canister or rubber bullet reportedly fired by Oakland police. At the University of California-Berkeley, campus police also are under investigation for allegedly roughing up students and faculty (as seen in this video) at an Occupy rally earlier this month. And in Seattle this week, an 84-year-old community activist, a priest and a pregnant teenager were pepper-sprayed.

Such tactics have drawn fire not only from Occupy Wall Street and civil libertarians, but also from law enforcement experts. Here is what Norm Stamper, who was the police chief in Seattle during the chaotic anti-World Trade Organization protests in 1999, recently had to say about police violence in the latest uprising:

More than a decade later, the police response to the Occupy movement, most disturbingly visible in Oakland — where scenes resembled a war zone and where a marine remains in serious condition from a police projectile — brings into sharp relief the acute and chronic problems of American law enforcement. Seattle might have served as a cautionary tale, but instead, U.S. police forces have become increasingly militarized, and it’s showing in cities everywhere: The NYPD “white shirt” coating innocent people with pepper spray, the arrests of two student journalists at Occupy Atlanta, the declaration of public property as off-limits and the arrests of protesters for “trespassing.”

One Occupy-affiliated protester in New York, who said he was a former NYPD officer, echoed this theme of an increasingly aggressive, militarized police prone to responding to mostly peaceful protests with inappropriate force. The police are “jacked up” to crack down, he told me.

Occupations across the country have born the brunt of some violent police tactics, and in a world where everyone has a camera-phone, a lot of their brutish behavior has been caught in photographs and on video.

Police work is difficult and dangerous, and the majority of officers on the street behave like pros. When it comes to controlling crowds of angry protesters, they’re often put into tense situations and ordered to do things they may not want to do by commanders who are far removed from the scene. I’ve witnessed a lot of restraint from cops, which of course doesn’t make the news.

But being human, cops are also prone to fear and rage like everyone else. A minority of cops, like a minority of protesters, lose their cool in tense situations. The difference is that they aren’t amateurs – they’re well trained and have guidelines that they’re required to follow. When a cop loses his or her cool, it can be terrifying. And when a protester exercising his or her right to assemble and speak is a victim of excessive force, it also violates the United States Constitution.

← Welcome to the Plutonomy Backlash
Chicago Occupier: “Not the first time kids have stood up for other people’s rights.” →
Subscribe
Login
0 Comments
Inline Feedbacks
View all comments