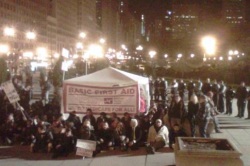 The day after she got out of jail, Martese Chism gave an interview to Mike Malloy on his nightly radio talk show.1 On Saturday, October 22nd, Chism, and her fellow registered nurse, Jan Rodolfo, were manning the first aid tent at Occupy Chicago in Grant Park, when police came to clear the occupation.2

[A]t 11 o’clock white shirt Chicago police officers came up and told us that there’s an ordinance that says you have to leave the park at 11 p.m., and if you do not leave or move your tent, you will be arrested. And then they were like “Are you sure you don’t want to move your tent, or do you want us to move your tent?” And we told the officers we believe that Chicago occupiers have a right to protest, a right to assemble and freedom of speech, and we believe that this ordinance is violating that right. And as long as the protesters are here, we will be here. … [F]inally at 1 o’clock they put this big light, like a ball park light, and put it on the tent. And then they moved in on us. And so all the protesters surrounded the tent to prevent them from taking the tent down, and to prevent them from arresting us. So they surrounded the protesters and us, and then maybe like an hour later they moved in. They arrested the back people first and then they went to the right side, the front. And then once they arrested everybody, … they took the tent down and we were just standing there, and there was people watching us get arrested. We were the last two to get arrested.

Chism then spent 23 hours in a cold jail cell, from which jailers had taken the mattress.3 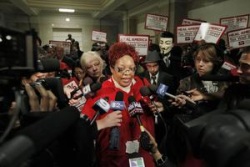 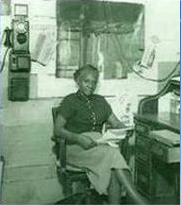 Malloy asked Chism, who is black, about her grandmother, who helped with the Freedom Summer project in 1965. During Freedom Summer, young people, many of them white, went to Mississippi to urge black adults to register to vote.4 Some of the young people ran schools for black children, teaching them active citizenship.5 These activities threatened the Jim Crow racial caste system, which had been operating in that state for 90 years.6 And some of Jim Crow’s enforcers murdered some of those Freedom Summer workers, Chism’s grandmother likely among them.7 8 9

My grandmother, her name was Birdia Keglar. And in the 1960’s … she marched with Dr. King, and made the effort trying to get the black people in Mississippi to register to vote. So in January 1966, when I was five years old, she went to Jackson, Mississippi, to give testimony there – with a group, this was like three cars. She went to Jackson, Mississippi, to Senator Robert Kennedy’s hearing to give a testimony on them being denied their right to vote. And on her way back, she was pulled over and it was maybe six people, but her and another woman, they were murdered … And at the time — I mean cause they let us know that you could die, but to keep the dream alive and keep moving forward. And so at six years old, that’s when I made up my mind that when everybody else was crying at the funeral, as a child I didn’t cry. I said, “I will continue your dream, continue your fight.” And so I went on to college, and did everything. And until now, it looks like the things that the civil rights people fought for, that the American dream is in trouble. And I feel that it’s my time, the nurses’ time to fight to save this dream … And on her way back in that car, you know when they tell the story … My grandmother dealt with a lot of college kids, white college kids, coming down there to help them. She would hide them in her home, and I was too young to remember. So when I see these kids, it brings back memory … when she did it. And that’s why I’m like, they’re standing up for their rights, this is not the first time young kids have stood up for other people’s rights. … [A]nd our nurses union, we believe that’s the right thing to do so we’re standing with them.

Chism said she would go back to Grant Park:

… As long as they’re out there, we’re going to be out there with them.

Malloy asked, “Is there anything you need listeners of this program to do — just support the movement I guess.”

… They need to call their legislature. Because, what our union is trying to do, is to get Congress to tax Wall Street. Because we believe that this economic crisis, it was caused by Wall Street. And so we’re trying to get Congress to pass a financial transaction tax. … [T]he only way we can heal Main Street, we have to deal with Wall Street. And I know it’s not going to be an easy fight, because I can see what the president is going through now. But if people put the pressure, like they did with the civil rights movement. And even with freeing the slaves, it’s the people. So the people need to start moving. Join the nurses, doing the Occupy Wall Street. And we have a movement to move Washington into the people’s direction.

The nursing group said two volunteer nurses were arrested along with the protestors. The women were finally released at about 1:30 a.m. Monday after spending about 23 hours in police custody.

“It was a terrible experience,” said longtime Stroger Hospital nurse Martese Chism, who said she didn’t expect to spend an entire day in jail. Despite spending a night in a cold cell and having her mattress taken from her, Chism said she’d return for protests next weekend, if asked.

Other Occupiers took to Facebook and Twitter to complain about conditions in the jail. Occupiers accused 1st District officers of hanging up on callers checking to see if their friends or family members were still in custody, and claimed that 30 men were held in one room with no toilet paper for 30 hours.

The arrestees also claimed they were unable to make their one phone call for more than 16 hours.

(4) ‘Freedom Summer: The Savage Season That Made Mississippi Burn and Made America a Democracy’ by Bruce Watson – CSPAN Book/TV – CLICK HERE to buy the book at Powell’s.

In the summer of l964, forty-one Freedom Schools opened in the churches, on the back porches, and under the trees of Mississippi. The students were native Mississippians, averaging fifteen years of age, but often including small children who had not yet begun school to the elderly who had spent their lives laboring in the fields. Their teachers were volunteers, for the most part still students themselves. The task of this small group of students and teachers was daunting. They set out to replace the fear of nearly two hundred years of violent control with hope and organized action. Both students and teachers faced the possibility, and in some cases, the reality, of brutal retaliation from local whites. They had little money and few supplies. Yet the Freedom Schools set out to alter forever the state of Mississippi, the stronghold of the Southern way of life.

In Mississippi, the method of controlling black votes and regulating their economic and public lives by full-scale and openly brutal violence was known as the First Mississippi Plan of 1875. Whites openly resorted to violence and fraud to control the black vote, shooting down black voters “just like birds.” …

When Mississippi began formally and legally to segregate and disfranchise blacks by changing its state constitution and passing supportive legislation in the 1890s, knowing observers referred to these legal moves as the Second Mississippi Plan. …

(7) ‘Dying To Vote In Mississippi, Part II’ By Susan Klopfer

In the early evening hours of January 12, 1966, as they returned home from a special meeting with Senator Robert F. Kennedy in Jackson, the two civil rights activists from Tallahatchie County were killed and four other passengers injured, two seriously, after their car left the road near the small town of Sidon, south of Greenwood in Leflore County.

Birdia Keglar, 56, was found decapitated and both of Adeline Hamlet’s arms had been “cleanly” severed from her body, confirm two Keglar family members, a close friend, and a Tallahatchie County minister. …

Months earlier, both women were hanged in effigy by local Klansmen and warned not to participate in further voting rights activities. Each had testified before a congressional hearing in support of the Voting Rights Act of 1965.

Keglar and the others were coming back home this time from a subcommittee meeting on discrimination and poverty in the Delta headed by Senator Robert F. Kennedy.

Several times before, Klansmen had tried to force [the driver] Grafton Gray off the road; Klansmen running blacks off the road was not an unusual event to take place in the Delta. Stories abound of such incidents, Chism and others confirmed.

Gray’s surviving second wife said that she was married after the accident “… and he would not tell me anything about it, nothing at all. I could tell that he was still afraid to talk. He had told me about other times Klansmen tried to run him off the road, but he would say nothing about this accident. It affected him greatly.”

Hamlett, 78, was a retired schoolteacher and one of the first blacks to register to vote in Tallahatchie County, Miss. Keglar, 57, was an organizer for the NAACP who had sued the local sheriff after she was prevented from paying her poll tax. Each had testified before a congressional commission in support of the Voting Rights Act of 1965.

The women died on Jan. 11, 1966, as they were returning home from a secret meeting in Jackson with then-U.S. Sen. Robert F. Kennedy. For years, relatives and certain researchers have insisted that the car was run off the road by the Klan.

Zachery was told that the driver of the car, Grafton Gray, supposedly played dead and could hear the women being tortured. “When my family members would try to talk to him, he would not,” she recently told the AP.

The FBI tracked down the wreck’s lone survivor, backseat passenger Richard Simpson, a white activist from Massachusetts, who confirmed the basic details contained in a Mississippi Highway Patrol report, the bureau’s letter said. The accident report said a car on the wrong side of the road struck the activists’ car head-on.

“The impact caused the hood of (the) car to break loose and move through the windshield, fatally injuring” Hamlett and Keglar, the FBI determined.

Dated May 27, it said there was “insufficient evidence to indicate that a racially motivated homicide occurred.”

As the Justice Department announces it has closed nearly half of its investigations into unresolved killings from the civil rights era, we look back at the 1964 murders of civil rights workers James Chaney, Andrew Goodman and Michael Schwerner, the subject of the new documentary Neshoba: The Price of Freedom. Although dozens of white men are believed to have been involved in the murders and cover-up, only one man, a Baptist preacher named Edgar Ray Killen, is behind bars today. Four suspects are still alive in the case. We play excerpts of Neshoba and speak with its co-director, Micki Dickoff. We’re also joined by the brothers of two of the victims, Ben Chaney and David Goodman. And we speak with award-winning Mississippi-based journalist Jerry Mitchell of the Clarion-Ledger, who’s spent the past twenty years investigating unresolved civil rights murder cases, as well as Bruce Watson, author of the new book Freedom Summer: The Savage Season that Made Mississippi Burn and Made America a Democracy.