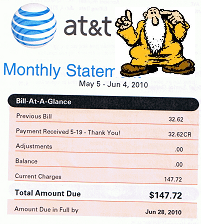 My 85-year-old father, whom we call “Pappy,” has his land line telephone service with AT&T. Last spring, AT&T sent Pappy a DSL modem and a brochure with a cheery welcome to its internet service. But he hadn’t ordered it. And when we realized that neither had any of his children ordered it, Pappy sent the modem back — but by then it was beyond AT&T’s return deadline. Pappy called AT&T and told the lady he reached “I don’t even have a computer.” She told him that the matter would “be taken care of.” But AT&T sent its next bill with the DSL charge. Pappy called AT&T again, and the gentleman said to scratch out the DSL line items, and just pay the rest — and that’s what Pappy did. AT&T sent the next bill with an additional monthly DSL charge and a late fee. Pappy called again, and got passed from one person to another for an hour. Next, AT&T made a robo-call, warning Pappy of possible service cut-off or collection action. For five straight days at 9 in the morning, AT&T robo-called him with that message. Again, Pappy called AT&T, but this time demanded to talk directly to the billing department. “I am the billing department,” said the lady. Soon after, Pappy noticed some fine print on his phone bill: “Residential customers may also contact the Ohio Consumers’ Counsel for assistance with complaints and utility issues at 1 877 742 5622 (toll free).” So he called the number and told his story. The next day, a lady from AT&T called Pappy, apologized, deleted the DSL and late charges, and gave him the amount to pay. The company offered nothing for his time and trouble, but it was a relief nonetheless — problem solved.

That was how a state agency, the Ohio Consumers’ Counsel, worked under the administration of the Democratic governor, Ted Strickland. But now Ohio has a new, Republican governor, former Fox News host and Wall Street bank exec, John Kasich.1 +2 Gov. Kasich is at the fore among Republican office-holders that are now swinging a meat axe at the commonwealth: public health, safety, schools, transportation, the social safety net, and so on.3 +4 In addition, Kasich calls for cutting the Ohio Consumers’ Counsel’s budget by half — even though its funding comes not from the state, but entirely from the utility companies.5 Should that go through, then next time there may be no one to goad AT&T to ease up on somebody’s old pappy.

According to the Columbus Dispatch (May 12, 2010), Kasich “tried to persuade two state pension funds in 2002 to invest with Lehman Brothers while he was the managing director of the investment banking house’s Columbus office.”
Despite only claiming two contacts Kasich also called a third pension fund in 2002 and tried to pitch Lehman’s brokerage services.
Following the collapse of Lehman Brothers, Ohio pensions took a $480 million hit, according to the Associated Press (April 2, 2010).
Kasich, who is now running for governor of Ohio, made nearly $590,000 in salary and bonuses as a Lehman Brothers managing director in 2008 before the banking giant collapsed later that year (Associated Press, 4/2/10)

… But in the meantime, it is Kasich, host of “Heartland With John Kasich” from 2001 to 2007 and guest host on Fox’s “The O’Reilly Factor,” who is running against Democratic Gov. Ted Strickland of Ohio and finding that the old ties to Fox can be very handy.

Gov. John Kasich (R ) has proposed cutting 25 percent of schools’ budgets, $1 million from food banks, $12 million from children’s hospitals, and $15.9 million from an adoption program for children with special needs. A Kasich staffer revealed yesterday that these cuts are more about politics then budget-balancing, telling the Cincinnati Dispatch that “even if there weren’t an $8 billion deficit, we’d probably be proposing many of the same things.” The plan includes tax cuts for oil companies, a repeal of the estate tax and an income tax cut for the rich that former Gov. Ted Strickland (D) halted last year because of the state’s fiscal crisis.

Mem-o-ries… I used to have AT&T telephone service. I don’t know how many months it was that I blindly paid my bill before I noticed some unexplained charge for some mysterious service that I was positive I didn’t want, need or order. When I finally got hold of someone, they eventually indicated that oh, yes, they were planning to remove that charge. I said, when? And they of course had no reply.

I won’t even go into what I went through with their DSL service,let alone the absurd behavior of their customer service department when I tried to return the free phone I’d selected just a couple of weeks earlier and give them $400 instead for the phone I’d decided to get (the gist is that they refused to let me do that).

They lost me as a customer FOREVER and, like you, I tell everyone I know about my negative experiences with them. Wonder how long they can keep this up?

P.S. Unbelievable that such a valuable privately funded agency could be targeted for the “smaller-government” meat axe in the name of appearances.

Well, the new government probably assumes the agency actually is funded by them and didn’t bother to check. As the New York Times reporter said, there are frightening numbers of people out there in our world who simply believe what they want to believe and have absolutely no interest in the facts.

Those AT&T people could be rude sometimes. I’m glad your father made it through that mess with the company. They should have never send packages like that before ordering. And the Ohio Consumers’ Counsel is very effective but why do they need to cut-of their budget when they doing a great job for the people in Ohio!