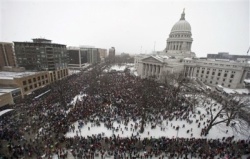 “Extravagant pension and health benefits” is a charge made against public service workers by the billionaire-backed political group, Americans for Prosperity (AFP).1 The charge is one of several on the web site the group put up to support the billionaire-backed Wisconsin governor, Scott Walker, in his effort to bust the state’s public sector unions.2 Walker’s bill to cancel public service workers’ collective bargaining rights has spurred tens of thousands in Madison and nationwide to rally over the past three weeks to keep those rights, and has put Wisconsin at center stage in a national Republican union-busting campaign.3 “Exorbitant benefits,” “plush benefits,” “lavish contracts,” AFP complains. But, compared with private sector workers of like education and age, public sector workers’ earn less.4 So, if AFP really wants to fight extravagance, it would surely do better to look away from workers struggling to stay in the middle class, and towards their, and the governor’s, billionaire benefactors — the brothers David and Charles Koch.5+ 6 Beyond the usual extravagances of a billionaire, the Koch brothers have slathered think tanks, politicos and media with more than a hundred million dollars to push their political agenda: dismantling public health, safety, retirement, education, climate and clean energy programs, and leaving big corporations, such as their own Koch Industries, to pollute and skip taxes.7+ 8 To fight that kind of extravagance — and to keep good public service — we would surely do better to bring back the 70% millionaire’s tax bracket of the 1970’s (or maybe the 91% rate of the 1950’s), than to cancel the rights and renege on the contracts of public service workers.9

Walker is making this claim because his budget repair bill would still allow workers to “negotiate” for their wages: under a cap that Walker and the Republican legislature want to set in stone. This is clearly not “collective bargaining” in any real sense of the word, since public employees would already have strict limits imposed upon them before they even get to the bargaining table. Plus, restricting collective bargaining to only wages means that the employer can simply change other elements of worker compensation (like slashing benefits) to make up for any wage increases, without workers having any say about it.
Walker’s goal is simply to bust public employee unions, which is exactly what happened in Indiana after Gov. Mitch Daniels (R ) ended collective bargaining for public employees …

This is not the first time that Walker has tried to mislead the public about the practical implications of his union-busting effort. In fact, earlier this month, he ludicrously claimed that under his proposal “collective bargaining is fully intact.”

4. ‘The Wage Penalty for State and Local Government Employees’, by John Schmitt, May 2010, Center for Economic and Policy Research

5. ‘Covert Operations — The billionaire brothers who are waging a war against Obama’ by Jane Mayer August 30, 2010, The New Yorker

A Republican campaign consultant who has done research on behalf of Charles and David Koch said of the Tea Party, “The Koch brothers gave the money that founded it. It’s like they put the seeds in the ground. Then the rainstorm comes, and the frogs come out of the mud—and they’re our candidates!”

According to Wisconsin campaign finance filings, Walker’s gubernatorial campaign received $43,000 from the Koch Industries PAC during the 2010 election. That donation was his campaign’s second-highest, behind $43,125 in contributions from housing and realtor groups in Wisconsin. The Koch’s PAC also helped Walker via a familiar and much-used politicial maneuver designed to allow donors to skirt campaign finance limits. The PAC gave $1 million to the Republican Governors Association, which in turn spent $65,000 on independent expenditures to support Walker. The RGA also spent a whopping $3.4 million on TV ads and mailers attacking Walker’s opponent, Milwaukee Mayor Tom Barrett. Walker ended up beating Barrett by 5 points. The Koch money, no doubt, helped greatly.

7. ‘Covert Operations — The billionaire brothers who are waging a war against Obama’ by Jane Mayer August 30, 2010, The New Yorker

[Charles and David Koch] poured more than a hundred million dollars into dozens of seemingly independent organizations. Tax records indicate that in 2008 the three main Koch family foundations gave money to thirty-four political and policy organizations, three of which they founded, and several of which they direct. The Kochs and their company have given additional millions to political campaigns, advocacy groups, and lobbyists. …
Only the Kochs know precisely how much they have spent on politics. Public tax records show that between 1998 and 2008 the Charles G. Koch Charitable Foundation spent more than forty-eight million dollars. The Claude R. Lambe Charitable Foundation, which is controlled by Charles Koch and his wife, along with two company employees and an accountant, spent more than twenty-eight million. The David H. Koch Charitable Foundation spent more than a hundred and twenty million. Meanwhile, since 1998 Koch Industries has spent more than fifty million dollars on lobbying. Separately, the company’s political-action committee, KochPAC, has donated some eight million dollars to political campaigns, more than eighty per cent of it to Republicans. So far in 2010, Koch Industries leads all other energy companies in political contributions, as it has since 2006. In addition, during the past dozen years the Kochs and other family members have personally spent more than two million dollars on political contributions. In the second quarter of 2010, David Koch was the biggest individual contributor to the Republican Governors Association, with a million-dollar donation. Other gifts by the Kochs may be untraceable; federal tax law permits anonymous personal donations to politically active nonprofit groups.

Charles Koch seems to have approached both business and politics with the deliberation of an engineer. “To bring about social change,” he told Doherty, requires “a strategy” that is “vertically and horizontally integrated,” spanning “from idea creation to policy development to education to grassroots organizations to lobbying to litigation to political action.” The project, he admitted, was extremely ambitious. “We have a radical philosophy,” he said.

In 1977, the Kochs provided the funds to launch the nation’s first libertarian think tank, the Cato Institute. According to the Center for Public Integrity, between 1986 and 1993 the Koch family gave eleven million dollars to the institute. Today, Cato has more than a hundred full-time employees, and its experts and policy papers are widely quoted and respected by the mainstream media. It describes itself as nonpartisan, and its scholars have at times been critical of both parties. But it has consistently pushed for corporate tax cuts, reductions in social services, and laissez-faire environmental policies.

When President Obama, in a 2008 speech, described the science on global warming as “beyond dispute,” the Cato Institute took out a full-page ad in the Times to contradict him. Cato’s resident scholars have relentlessly criticized political attempts to stop global warming as expensive, ineffective, and unnecessary. Ed Crane, the Cato Institute’s founder and president, told me that “global-warming theories give the government more control of the economy.”

According to the EPA, Koch businesses are huge polluters, emitting thousands of pounds of toxic pollutants. As soon as he got into office Walker started cutting environmental regulations and appointed a Republican known for her disregard for environmental regulations to lead the Department of Natural Resources. In addition, Walker has stated his opposition to clean energy jobs policies that might draw workers away from Koch-owned interests.