As throngs of citizens rally for the twelfth straight day at and in the Wisconsin state house, and as thousands more have been rallying in Ohio and other states, they are fighting for a long-held human right — that of collective bargaining.1 The right to join a collective-bargaining group — a labor union — is stated in the Universal Declaration of Human Rights, and the right to collective bargaining itself is stated in the Declaration on Fundamental Principles and Rights at Work.2+3 Those rights flow from the basic right of freedom of association. Collective bargaining, carried out by a committee of workers and elected union representatives, is a form of workplace democracy — it gives a worker a say in ones wages and working conditions.4 In the United States, private sector workers gained their collective bargaining rights in 1935, and in 1962 federal public sector workers gained theirs.6+7+8 In 1959, Wisconsin became the first state to assure collective bargaining rights to local public servants, and since then most states have done the same.9+10 Now, Republican governors and legislators of Wisconsin, Ohio, Tennessee, Idaho, Indiana, Iowa, and other states have moved to severely cut or cancel collective bargaining rights for state and local public servants. And yesterday, crowds all around the country rallied in support of the fighters for workers’ rights in Wisconsin, and to stop the erasure of an established human right.11+12

Photos from some of the rallies in support of Wisconsin public servants and collective bargaining rights across the nation on Saturday, February 26, 2011: 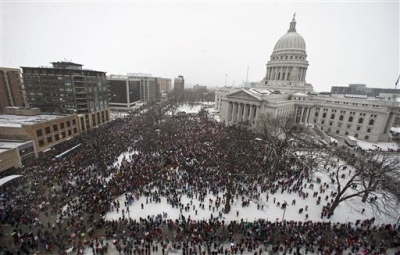 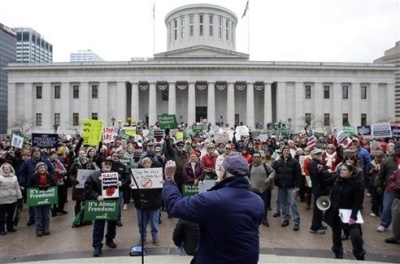 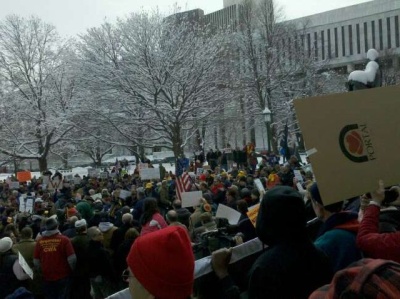 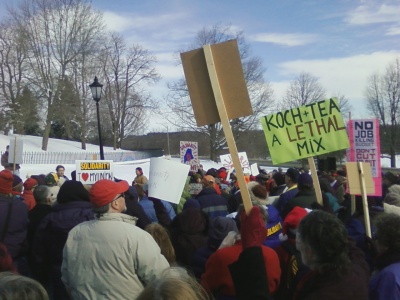 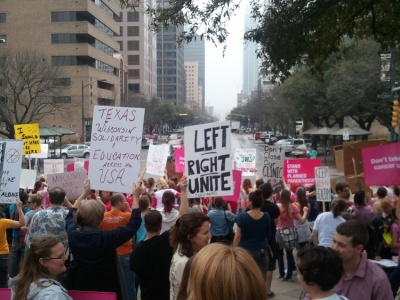 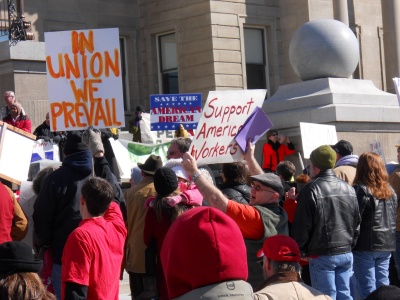 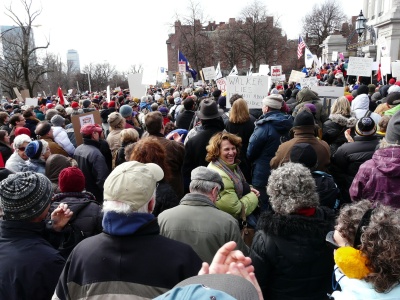 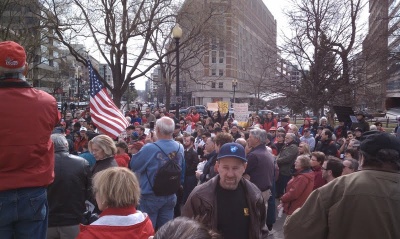 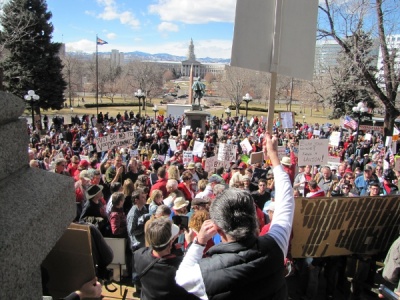 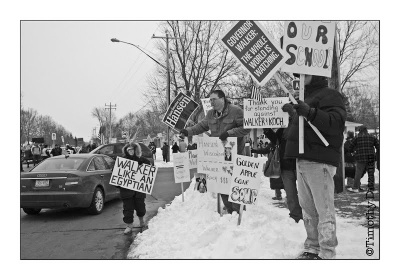 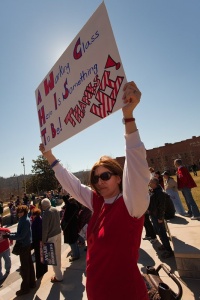 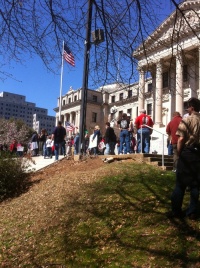 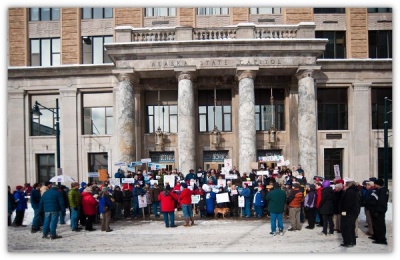 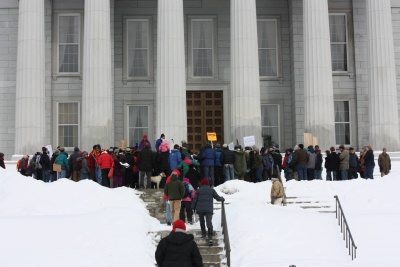 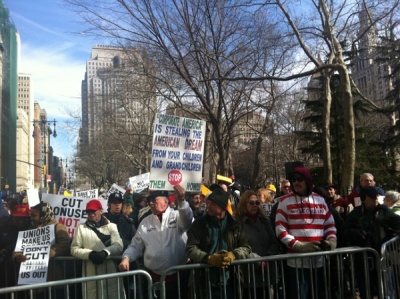 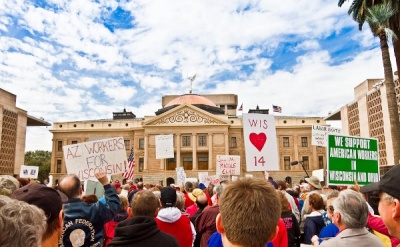 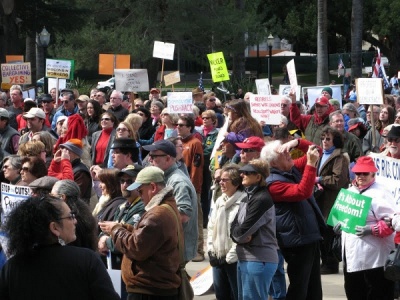 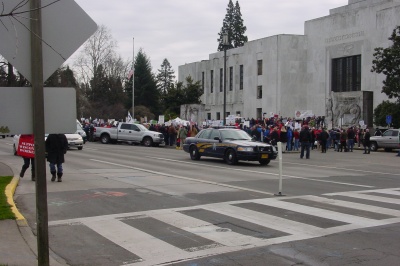 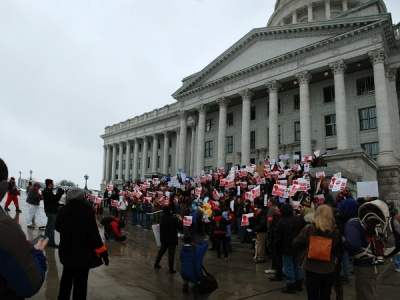 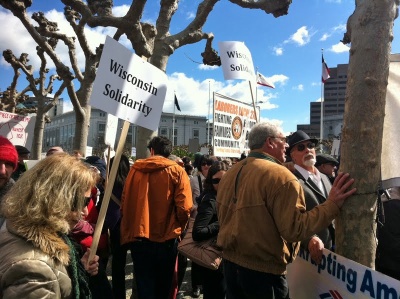 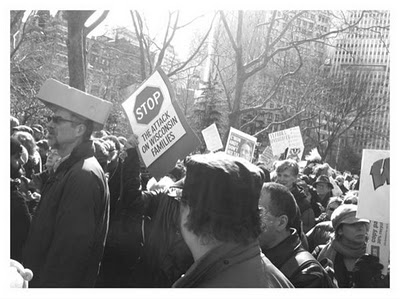 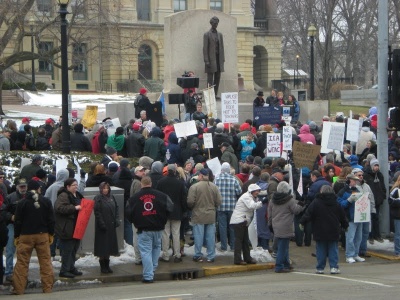 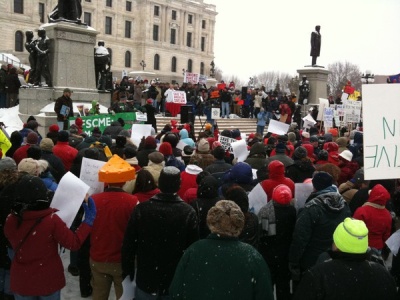 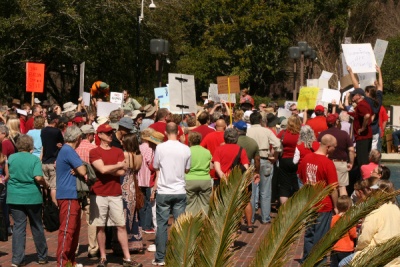 Walker’s bill would strip public employees of the right to bargain collectively for anything but higher pay (and would cap the amount of wage hikes they might end up gaining in negotiations). His intentions are clear — before assuming office, Walker threatened to decertify the state’s employees’ unions (until he discovered that the governor doesn’t have that power).

2. Universal Declaration of Human Rights, Article 23, Item 4: Everyone has the right to form and to join trade unions for the protection of his interests.

3. ILO Declaration on Fundamental Principles and Rights at Work – Freedom of association and the effective recognition of the right to collective bargaining

The freedoms to associate and to bargain collectively are fundamental rights. … These enabling rights make it possible to promote and realize decent conditions at work. …

Item 82: The right to bargain collectively with an employer enhances the human dignity, liberty and autonomy of workers by giving them the opportunity to influence the establishment of workplace rules and thereby gain some control over a major aspect of their lives, namely their work (see Alberta Reference, at p. 368, and Wallace v. United Grain Growers Ltd., [1997] 3 S.C.R. 701, at para. 93).  As explained by P. C. Weiler in Reconcilable Differences (1980):

Collective bargaining is not simply an instrument for pursuing external ends, whether these be mundane monetary gains or the erection of a private rule of law to protect dignity of the worker in the face of managerial authority.  Rather, collective bargaining is intrinsically valuable as an experience in self-government.  It is the mode in which employees participate in setting the terms and conditions of employment, rather than simply accepting what their employer chooses to give them …. [p. 33]

The National Labor Relations Act or Wagner Act (after its sponsor, Senator Robert F. Wagner) (Pub.L. 74-198, 49 Stat. 449, codified as amended at 29 U.S.C. § 151–169), is a 1935 United States federal law that limits the means with which employers may react to workers in the private sector who create labor unions, engage in collective bargaining, and take part in strikes and other forms of concerted activity in support of their demands.

It is hereby declared to be the policy of the United States to eliminate the causes of certain substantial obstructions to the free flow of commerce and to mitigate and eliminate these obstructions when they have occurred by encouraging the practice and procedure of collective bargaining and by protecting the exercise by workers of full freedom of association, self-organization, and designation of representatives of their own choosing, for the purpose of negotiating the terms and conditions of their employment or other mutual aid or protection.

Wisconsin … passed a comprehensive collective bargaining law in 1959 and was the birthplace of the national union representing non-federal public employees.

Public unions have the right to collectively bargain in about 30 states, plus the District of Columbia and Puerto Rico.

In some states in the south and west, public employees do not have the right to collectively bargain, and in Virginia and Texas, it is illegal to enter into a formal bargaining relationship with the public sector, according to Paul Secunda, Marquette University law professor.