(Analysis.) Supreme Court Justice Antonin Scalia, using his philosophy of “originalism”, says the Constitution does not guarantee equal rights to women. When recently asked about the 14th Amendment, which was passed by Congress in 1866, he said, “Certainly the Constitution does not require discrimination on the basis of sex. The only issue is whether it prohibits it. It doesn’t. Nobody ever thought that that’s what it meant. Nobody ever voted for that.”1 Leaving aside the chance that at least somebody might have thought that equal protection applied to women, there are still problems with Scalia’s view. For one, it runs against the Constitution’s plain language. The 14th Amendment’s equal protection clause reads: “No State shall make or enforce any law which shall … deny to any person within its jurisdiction the equal protection of the laws.“2 Clearly, with no mention of gender, that clause would apply as it says — to “any person.” Secondly, Scalia’s view runs against settled law. The Supreme Court set a well-followed precedent 40 years ago, when it unanimously struck down a law that “males must be preferred to females” in being named executors of an estate.3 Thirdly, Scalia’s view would once again allow laws that keep women down. Among such laws from the past are those that have barred women from juries, state schools and property ownership.4+5 And finally, Scalia seems two-faced on the matter. In the Supreme Court’s Bush v. Gore case of 2000, Scalia used equal protection as part of a maneuver to make George W. Bush president.6 In that maneuver the five-person Republican majority stopped the manual recount of machine-rejected ballots, cited equal protection to rule that Florida must set strict ballot-counting rules, and gave Florida an impossible deadline of two hours to comply and finish the recount. Surely, it was not in the original meaning of equal protection to specially use it to install a political ally of a Supreme Court justice as president. With his problem-riddled view against protecting rights, Justice Scalia serves as a reminder: The natural rights our ancestors fought to bring us, we must stand ready to fight to keep. 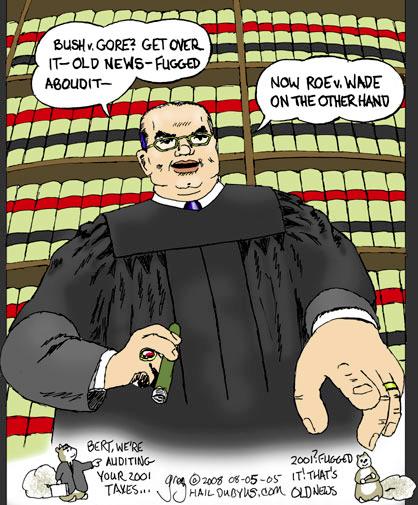 UPDATED 2013-07-07 to fix Scalia’s quote — some of the interviewer’s question was included.

Greenberger added that under Scalia’s doctrine, women could be legally barred from juries, paid less by the government, receive fewer benefits in the armed forces, and be excluded from state-run schools — all things that have happened in the past, before their rights to equal protection were enforced.

That women should have rights equal to men was a radical idea in 1868 when the Reconstruction Amendments passed. (Women didn’t get the federal right to vote for another 52 years.)

At the time, state laws prevented women from owning property, signing contracts, serving on juries. Unmarried women were freer than their married sisters due to notions dating back to English common law.

The “very being and legal existence of the woman is suspended during the marriage,” explained William Blackstone, the definitive British legal commentator of the 18th century.

It is “consolidated into that of her husband under whose wing and protection she performs everything,” he wrote.