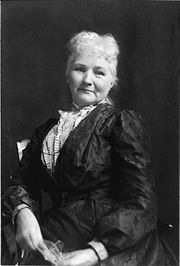 The days after the winter solstice, when the once-receding sun has turned and begun its walk back towards the people of the North, have for ages been marked by holidays and rising hopes.1 Now, as we go through the Great Recession, with a battered middle class and government under the sway of big corporations, we might take some hope from fighters for labor and democracy that have gone before:2

In the late 19th and early 20th centuries, Mother Jones fought to organize labor unions to bring decent conditions, hours and wages for America’s workers. And she had a keen sense of how to go about it.3 In her autobiography, she wrote:4

One night I went with an organizer named Scott to a mining town in the Fairmont (West Virginia) district where the miners had asked me to hold a meeting. When we got off the car I asked Scott where I was to speak and he pointed to a frame building. We walked in. There were lighted candles on an altar. I looked around in the dim light. We were in a church and the benches were filled with miners.

Outside the railing of the altar was a table. At one end sat the priest with the money of the union in his hands. The president of the local union sat at the other end of the table. I marched down the aisle.

“Holding a meeting,” said the president.

“For the union, Mother. We rented the church for our meetings.”

I reached over and took the money from priest. Then I turned to the miners.

“Boys,” I said, “this is a praying institution. You should not commercialize it. Get up every one of you and go out in the open fields.”

They got up and went out and sat around a field while I spoke to them. The sheriff was there and he did not allow any traffic to go along the road while I was speaking. In front of us was a schoolhouse. I pointed to it and I said, “Your ancestors fought for you to have a share in that institution over there. It’s yours. See the school board, and every Friday night hold your meetings there. Have your wives clean it up Saturday morning for the children to enter Monday. Your organization is not a praying institution. It’s a fighting institution. It’s an educational institution along industrial lines. Pray for the dead and fight like hell for the living!“

During World War II, Albert Camus fought for the French Resistance, writing for the Resistance newspaper, Combat.5 Towards the war’s end, as France at last threw off Nazi rule, Camus fought to bring open, democratic government. He wrote in Combat:6

… For what is at stake is indeed man’s salvation. And this is to be achieved not by taking a position outside the world but through history itself. The point is to serve man’s dignity by means that remain dignified in the midst of a history that is not. The difficult and paradoxical nature of such an undertaking is clear.

Indeed, we know that man’s salvation may well be impossible, yet we say that this is no reason to stop trying and, furthermore, that it is not permissible to call it impossible before making a genuine effort to prove that it isn’t.

We have that opportunity today. This country is poor, and we are poor with it. Europe is miserable, and its misery is ours. Lacking wealth and a material heritage, we have perhaps acquired a freedom that allows us to indulge in that folly called truth.

Howard Zinn also fought during World War II, but in the U.S. military flying bombing runs.7 After the war, he became a teacher and historian, and fought against war-making, and for civil rights. And he wrote “A People’s History of the United States”.8 He wrote:9

To be hopeful in bad times is not just foolishly romantic. It is based on the fact that human history is a history not only of cruelty, but also of compassion, sacrifice, courage, kindness. What we choose to emphasize in this complex history will determine our lives. If we see only the worst, it destroys our capacity to do something. If we remember those times and places—and there are so many—where people have behaved magnificently, this gives us the energy to act, and at least the possibility of sending this spinning top of a world in a different direction. And if we do act, in however small a way, we don’t have to wait for some grand utopian future. The future is an infinite succession of presents, and to live now as we think human beings should live, in defiance of all that is bad around us, is itself a marvelous victory.

Here are links to stories in The Paragraph about other fighters for democracy, both dead and living:

Throughout history, humans have celebrated the winter solstice, often with an appreciative eye toward the return of summer sunlight.

Massive prehistoric monuments such as Ireland’s mysterious Newgrange tomb (video) are aligned to capture the light at the moment of the winter solstice sunrise.

Germanic peoples of Northern Europe honored the winter solstice with Yule festivals—the origin of the still-standing tradition of the long-burning Yule log.

The Roman feast of Saturnalia, honoring the God Saturn, was a weeklong December feast that included the observance of the winter solstice. Romans also celebrated the lengthening of days following the solstice by paying homage to Mithra—an ancient Persian god of light.

7 ‘You Can’t Be Neutral on a Moving Train: A Personal History of Our Times’ (autobiography) – Howard Zinn The movie version is available at Netflix.