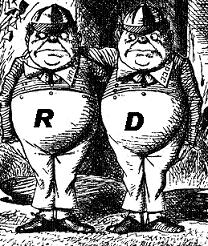 Our democracy is but a name. We vote? What does that mean? It means that we choose between two bodies of real, though not avowed, autocrats. We choose between Tweedledum and Tweedledee.1

Though Keller did not argue for not voting, she did express the age-old lament of political progressives, some of whom have withheld their votes so to teach the Democrats (let’s call them TweedleDEE) a lesson. But, as Robert Parry points out, that strategy has not worked to forward progressive policy.2 For example, in 1968, many anti-war voters stayed home or voted third-party, instead of voting for the liberal Democratic presidential candidate, Vice President Hubert Humphrey, who would not come out against the war in Vietnam. An argument that I remember floating around during that race was that it would be better for the hard-right Richard Nixon to win, so to more quickly bring about “the revolution.” With less than a one percent edge in the popular vote, Nixon won the presidency, and broadened the war. During his term, 20,000 U.S. soldiers and millions of Indochinese died. Again, in 1980, many progressive voters stayed home or voted for minor candidates, instead of voting for President Jimmy Carter, whom they viewed as too cautious and too centrist. The polls showed a tight race till close to election day, which would be the first anniversary of Americans being held hostage in Iran. Ronald Reagan pulled ahead and went on to win in a landslide. While the song, “Don’t Worry, Be Happy,” played on the radio, Reagan enacted policies that drove out manufacturing, damaged unions, turned the nation back to oil-guzzling, and boosted death squads that killed tens of thousands in Latin America. To pressure the Soviets in Afghanistan, Reagan funded Islamist radicals that later formed the Taliban and Al Qaeda, and allowed Pakistan to get the bomb. As a third example, in 2000, some progressives skipped over the centrist Democrat Al Gore to support their fellow progressive, Ralph Nader, running as a Green. These progressives bought into the story that the hard-line neoconservative George W. Bush was actually a moderate Republican — and Nader himself fanned this fable with his statement that “there’s not a dime’s worth of difference” between Bush and Gore. It turned out that votes for Nader in Florida made the race so close that Bush could claim victory and get five Republicans on the Supreme Court to stop the recount – in which Gore, going by the later news consortium recount, would have won.3 The Bush II regime brought damaging wars in Iraq and Afghanistan, secret wiretapping of citizens, cancelling of rights to a fair trial, torture, tax cuts for the rich, cuts in corporate regulation, a crashed economy, a shrunken and battered middle class, and eight years of inaction on global warming. Now, many progressives, once pumped up by the 2008 election, which brought a president that knows progressive policy, and which brought huge Democratic majorities to both houses of Congress, are dispirited by the back-pedaling and the scaled-back legislation enacted. Once again, some progressives talk of not voting or voting third-party in the coming election. But with Republicans more hard-line reactionary than ever, and in view of this history of damage done by not voting Democratic, the choice for progressives — as well as liberals, centrists and conservatives — seems clear: Vote for TweedleDEE! 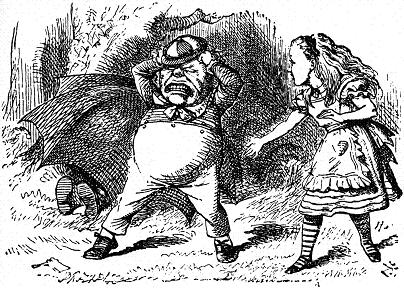 Tweedledum ( R ) is angry that his rattle is broken, and blames Tweedledee (D), who hides under an umbrella, as Alice tries to sooth. But if the rattle represents the general welfare of the United States, then it would have been Tweedledum himself who had broken it.

Tweedledum and Tweedledee from Through the Looking-Glass by Lewis Carroll; illustrations by John Tenniel