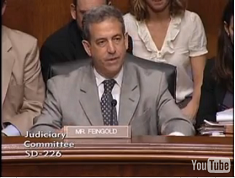 “[I]t’s quite extraordinary to grant government agents the statutory authority to secretly break into Americans homes,” said Sen. Russ Feingold (D-WI) last month at a Judiciary Committee hearing on the PATRIOT Act.80 A month after 9-11, with half its members shut out of their offices due to anthrax-powdered letters, the Senate passed the PATRIOT Act by a vote of 98-1 — the lone “nay” vote cast by Feingold.81 The stated purpose of the PATRIOT Act was to help stop terror attacks, but there is little to show it has done that.8283 However, the PATRIOT Act has boosted federal snooping.84 For instance, sneak-and-peak — the “authority to secretly break into Americans’ homes.” that Feingold mentioned — went from a seldom-used tactic to 760 warrants issued in 2008, but with only three warrants sought for terrorism cases.85 Now, Feingold and nine other senators are sponsoring a bill — the JUSTICE Act — to rein in the PATRIOT Act’s broad and easy search and seizure powers.86 Under current sneak-and-peek, a federal agent can get a secret warrant just by showing the judge that a regular, served warrant might “seriously jeopardiz[e] an investigation,” but with the JUSTICE Act, the agent would have to show that a secret warrant was needed for a solid reason, such as preventing “flight from prosecution” or “destruction of … the evidence sought,”87 Under current sneak-and-peek, an agent could extend the term of the secret warrant just by showing a judge “good cause,” but with the JUSTICE Act, the agent would again have to show a solid reason — the same criteria as for getting the warrant in the first place. Last week, after many members attended a classified Justice Department briefing, the Judiciary Committee, though having a 12-7 Democratic majority, sent out a bill with very few of the JUSTICE Act’s safeguards. Said Feingold:

I hope to work with [Chairman Leahy] and other members of this committee to make further improvements as this bill goes forward. In the end, however, Democrats have to decide if they are going to stand up for the rights of the American people or allow the FBI to write our laws. For me, that’s not a difficult choice.88

Feingold: “We’re not the Prosecutor Committee”

The senators sponsoring the JUSTICE Act are:

The Fourth Amendment to the U.S. Constitution

The right of the people to be secure in their persons, houses, papers, and effects, against unreasonable searches and seizures, shall not be violated, and no Warrants shall issue, but upon probable cause, supported by Oath or affirmation, and particularly describing the place to be searched, and the persons or things to be seized.

83 ‘Myths and Realities About the Patriot Act’ – ACLU

The government attributes convictions it says are terrorism-related that have nothing to do with the Patriot Act. The “400 convictions” claim overstates actual number of convictions and omits a number of key facts related to these numbers. Only 39 of these individuals were convicted of crimes related to terrorism. The median sentence for these crimes was 11 months, which indicates the crime the government equated with terrorism was not serious.

National Security Letters (NSLs). The FBI uses NSLs to compel internet service providers, libraries, banks, and credit reporting companies to turn over sensitive information about their customers and patrons. Using this data, the government can compile vast dossiers about innocent people. Government reports confirm that upwards of 50,000 of these secret record demands go out each year.

Hear, hear! It’s about time somebody started to rein in this shameful abuse of our constitutional rights.

It seems like as a society we’re becoming increasingly reactionary. When a shocking event such as 9/11 occurs the call goes up: “We need more power, more tools!” When in fact, 225+ years of history and experience has given us the tools, we just need to apply them. No one has yet presented a shred of evidence that any provision of the PATRIOT act would have made the slightest difference on 9/11. The way forward lies in being smarter, not sneakier.